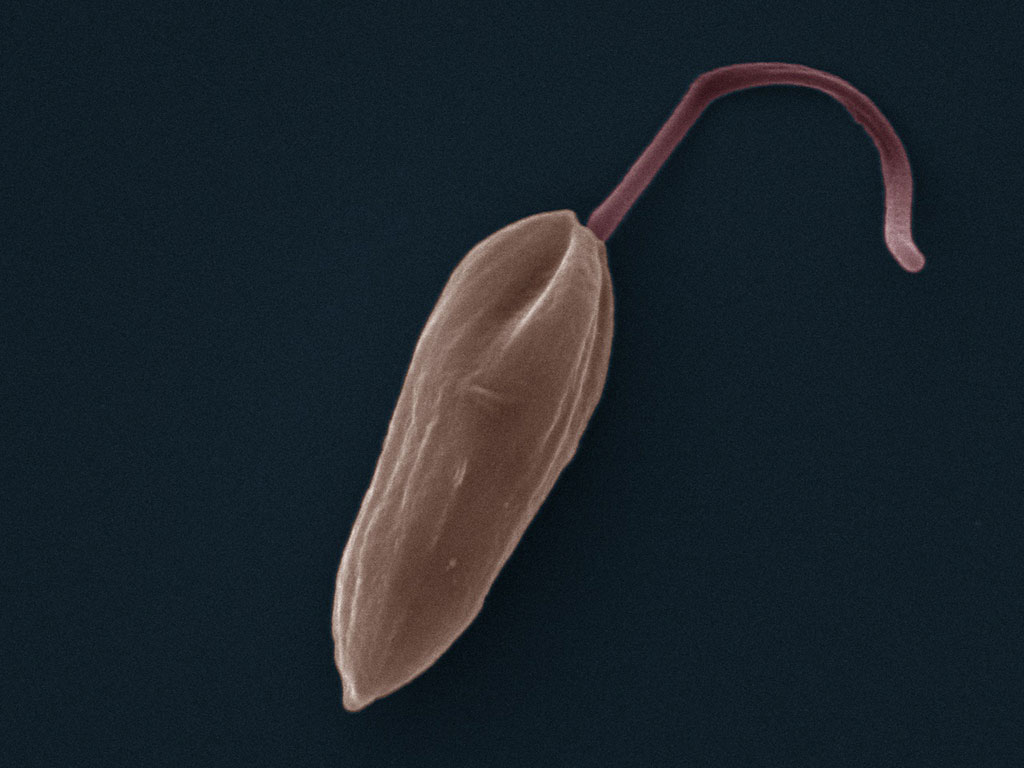 Image: False color SEM (scanning electron microscope) micrograph of a Leishmania promastigote. The cell body is shown in orange and the flagellum is in red (Photo courtesy of Wikimedia Commons)
Patients infected with the protozoan parasite Leishmania braziliensis develop chronic skin lesions that often fail to respond to treatment with anti-parasitic drugs.

Investigators at the University of Pennsylvania (Philadelphia, USA) sought to identify genes, which were differentially expressed among infected patients and which might be associated with the outcome of the disease. These genes could be useful as predictors of treatment failure and as targets for therapeutic drugs.

Towards this end, the investigators performed RNA sequencing (RNA-seq) of lesion biopsies taken from patients with cutaneous leishmaniasis at the initiation of treatment with pentavalent antimony and identified highly variable genes up-regulated relative to healthy skin. After RNA-seq of biopsies from two distinct patient cohorts and statistical filter strategies, they focused on a set of genes that were up-regulated in lesions from patients who did not respond to treatment, which included genes involved in cytolysis.

Given that cytolytic genes are induced early in the formation of the cutaneous leishmaniasis lesion, the investigators hypothesized that variations in the magnitude of expression of such genes might influence disease outcome and provide the potential markers to identify patients who may fail conventional therapy.

The results of the RNA-seq study revealed a prognostic signature comprising expression of three cytolytic genes. This gene panel combined with pathogen load predicted treatment response in two different patient cohorts and could potentially be used to triage patients who are unlikely to respond to conventional treatment as candidates for alternate therapies.

“The challenge of human studies is that there are so many confounding variables,” said contributing author Dr. Daniel P. Beiting, assistant professor of pathobiology at the University of Pennsylvania. “If you say, “I am going to compare people who have responded to those who did not respond,” it sometimes does not work because in those two groups there are a lot of other variables at play - sex, age, other co-morbidities. So what we did instead was say, “If we believe these patients are variable in the way they respond to treatment, why not look at what genes are variable?”

The study was published in the November 20, 2019, online edition of the journal Science Translational Medicine.