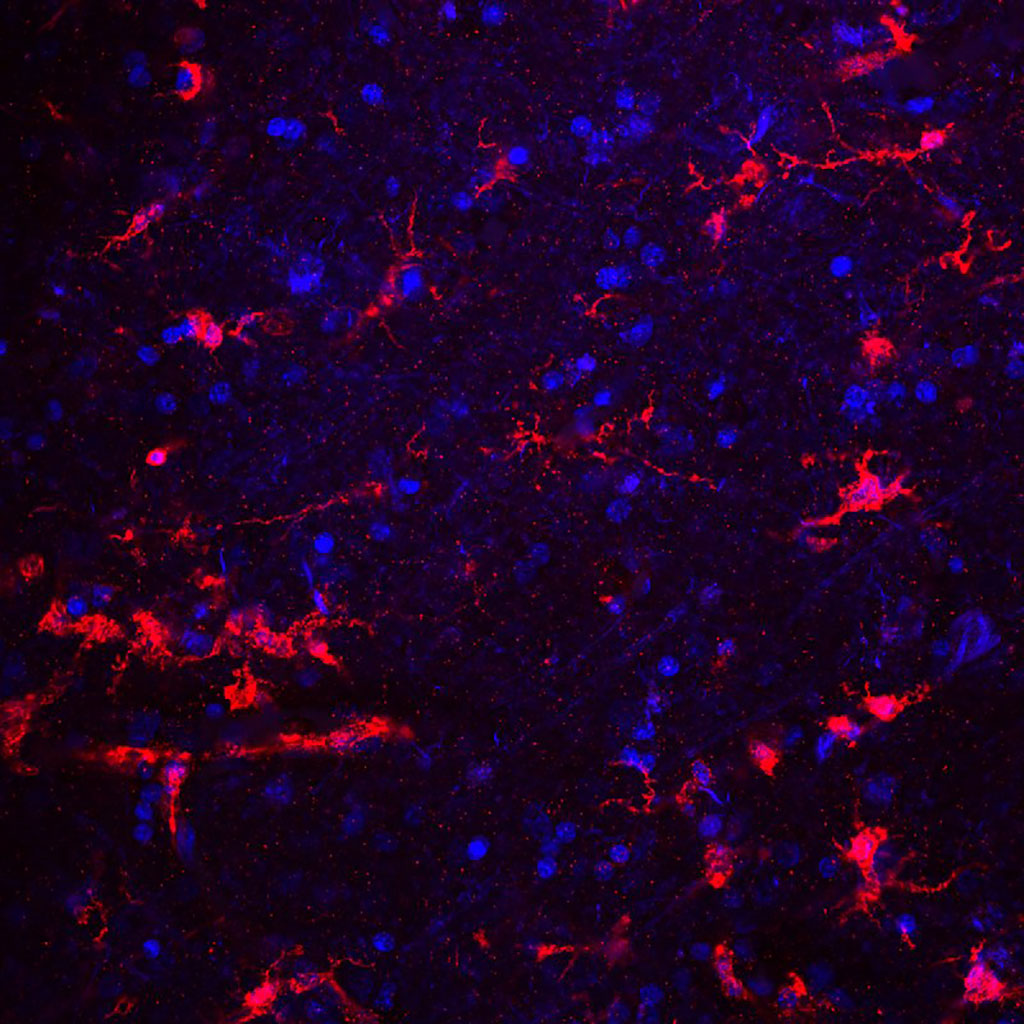 Image: Immunofluorescence image of microglial cells stained red with antibody. DNA shown in blue (Photo courtesy of Wikimedia Commons)
A recently published paper linked risk of developing Alzheimer’s disease (AD) to enhancers - non-coding DNA regions of the genome - that were present in microglia but not in other types of brain cells such as neurons or astrocytes.

In genetics, an enhancer is a short (50–1500 base pair) region of DNA that can be bound by proteins (activators) to increase the likelihood that transcription of a particular gene will occur. Enhancers can be located up to one million base pairs away from the target gene, upstream or downstream from the start site. There are hundreds of thousands of enhancers in the human genome.

Investigators at the University of California, San Diego (USA) isolated four different kinds of brain cells: neurons, microglia, oligodendrocytes, and astrocytes from six AD patients. The genes in these cells were examined for genetic variations associated with the disease in non-coding enhancer regions of each cell type.

Results revealed that while psychiatric disorders were primarily associated with variants in transcriptional enhancers and promoters in neurons, sporadic AD variants were largely confined to microglia enhancers. Interactome maps (maps of the whole set of molecular interactions in a particular cell) connected disease-risk variants in cell type-specific enhancers to promoters in an extended microglia gene network in AD.

Microglia are a type of neuroglia located throughout the brain and spinal cord. Microglia account for 10 to 15% of all cells found within the brain. As the resident macrophage cells, they act as the first and main form of active immune defense in the central nervous system.

Employing pluripotent human stem cells, the investigators were able to target an enhancer region near BIN1, a gene previously been linked to AD. They found that deleting this enhancer region led to a dramatic reduction in expression of BIN1 in microglia, but not in neurons or astrocytes.

"Focusing on genetic variation associated with Alzheimer's disease (AD), we show preferential enrichment in disease risk variants in enhancers that are selectively active in microglia, the major immune cell in the brain," said senior author Dr. Christopher Glass, professor of cellular and molecular medicine at the University of California, San Diego. "This finding substantially extends prior studies linking microglia to late-onset Alzheimer's disease."

The paper was published in the November, 14, 2019, online edition of the journal Science.