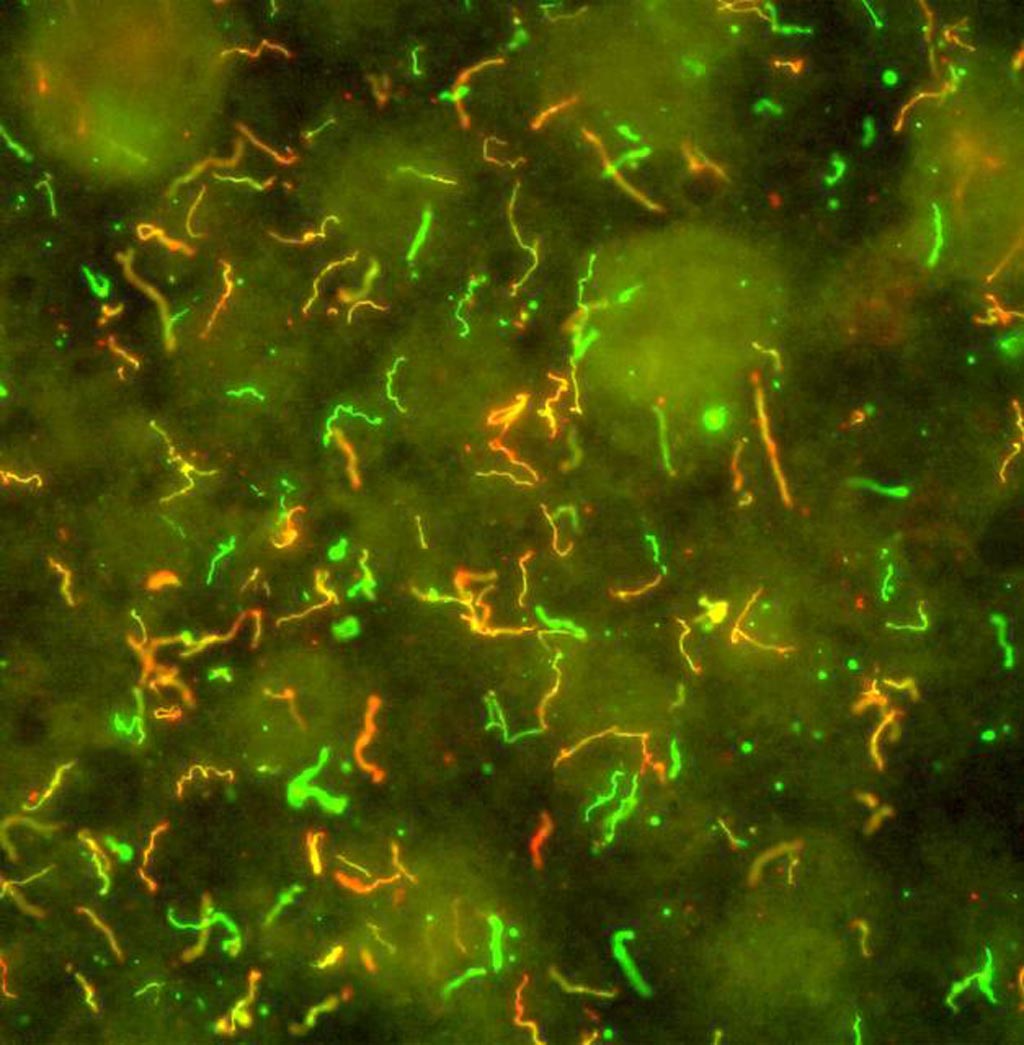 Image: In this photomicrograph, the spiral-shaped bacteria that cause Lyme disease, Borrelia burgdorferi, have been illuminated using red and green fluorescent antibodies (Photo courtesy of the National Institute of Allergy and Infectious Diseases).
A three-antigen-based immunoassay for diagnosis of Lyme disease has the potential to be developed for point-of-care use.

Lyme disease, which is caused by the spiral-shaped bacterium Borrelia burgdorferi, may be difficult to diagnose, as it causes a wide range of symptoms, from fever and rash to neurologic and cardiac symptoms and joint pain.

The most widely used method for Lyme diagnosis is testing for antibodies in the blood by ELISA and Western blot. A two-tiered protocol is recommended by the [U.S.] Centers for Disease Control and Prevention (CDC): the sensitive ELISA test is performed first, and if it is positive or equivocal, then the more specific Western blot is run. However, the reliability of the CDC two-tiered protocol is controversial.

Studies have shown that the Western blot IgM has a specificity of 94–96% for individuals with clinical symptoms of early Lyme disease. The initial ELISA test has a sensitivity of about 70%, and in two-tiered testing, the overall sensitivity is only 64%, although this rises to 100% in the subset of people with disseminated symptoms, such as arthritis. Erroneous test results have been widely reported in both early and late stages of the disease, and can be caused by several factors, including antibody cross-reactions from other infections, including Epstein–Barr virus and cytomegalovirus, as well as herpes simplex virus.

As an alternative to the two-tiered protocol, investigators at NIH/National Institute of Allergy and Infectious Diseases (Bethesda, MD, USA) and collaborators at several institutions including Columbia University (New York, NY, USA) and the University of Tennessee Health Science Center (Memphis, USA) developed a sensitive immunoassay based on three Borrelia burgdorferi antigens.

The investigators used human serum rigorously characterized as acute and convalescent early Lyme disease, Lyme arthritis, and post treatment Lyme disease syndrome, as well as the necessary control samples to select the best of 12 Borrelia burgdorferi proteins to improve their microfluidic assay (mChip-Ld). The operation of mChip is similar to that of ELISA for determining serum antibody concentrations. The mChip contains 10 zones, which detect the passage of a small amount (about one microliter) of blood. The results can be obtained in a color-coded format in about 15 minutes.

The investigators selected three antigens (3Ag) to include in the mChip-Ld: VlsE and a proprietary synthetic 33-mer (repeat units) peptide (PepVF) to capture sensitivity in all disease stages, and OspC for early Lyme disease.

Results revealed that these biomarkers were more effective than those previously used at identifying signs of Lyme disease infection in early stage samples, possibly as these antigens were able to detect antibodies that peaked in the first two to six weeks following infection.

The investigators suggested that their results opened the door for the development of a single, rapid, multiplexed diagnostic test for point-of-care use that could be designed to identify Lyme disease stage.

The study was published in the October 9, 2019, online edition of the Journal of Clinical Microbiology.