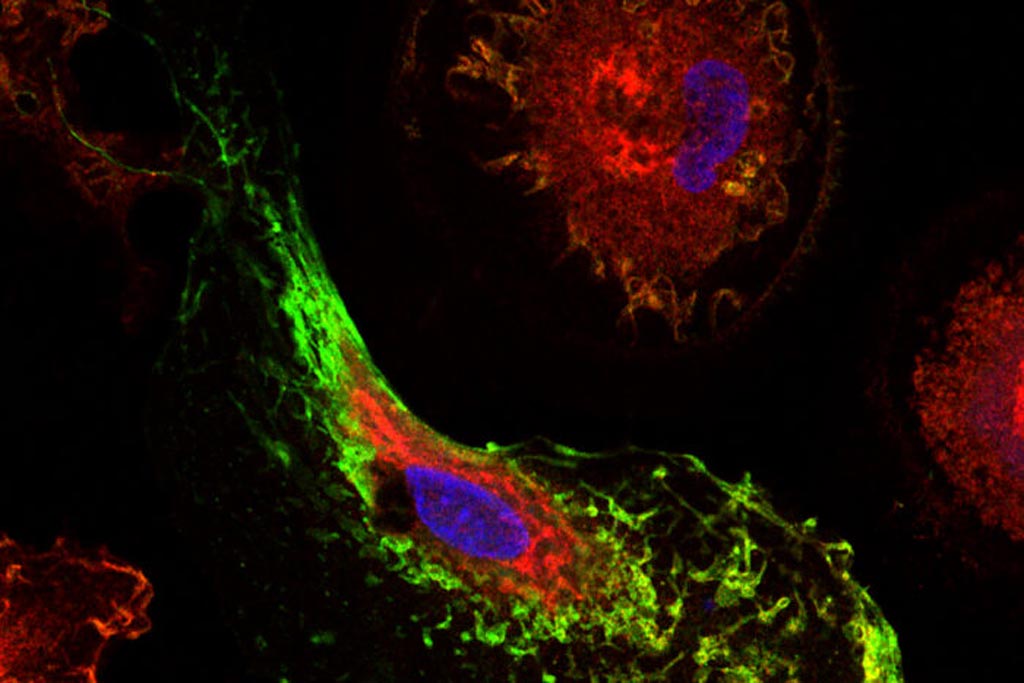 Image: A pair of genes that influence risk for Alzheimer’s disease, MS4A4A and TREM2, affect immune cells in the brain. They influence Alzheimer’s risk by altering levels of TREM2, a protein (shown stained in red) that is believed to help microglia cells clear excessive amounts of the Alzheimer’s proteins amyloid and tau from the brain. The MS4A4A protein is shown stained in green (Photo courtesy of Fabia Filipello and Dennis Oakley, Washington University School of Medicine).
A cluster of genes has been identified that modulates the activity of TREM2 (Triggering receptor expressed on myeloid cells 2), a protein biomarker for risk and progression of Alzheimer’s disease (AD).

Soluble TREM2 (sTREM2) has been detected in human cerebrospinal fluid (CSF), where it was found to be elevated in CSF of patients with multiple sclerosis and other inflammatory neurological conditions in comparison to patients without inflammatory neurologic disorders. Moreover, while genetic variants in TREM2 are associated with AD risk and change with AD progression, genetic modifiers of CSF sTREM2 remain unknown.

In order to better understand the role of sTREM2 in AD, investigators at Washington University School of Medicine (St. Louis, MO, USA) performed a genome-wide association study (GWAS) to identify genetic modifiers of sTREM2 in samples of CSF provided by the Alzheimer’s Disease Neuroimaging Initiative. For this study, the investigators measured sTREM2 levels in the cerebrospinal fluid of 813 older adults, most of whom were ages 55 to 90. Of those subjects, 172 had Alzheimer's disease, 169 were cognitively normal, and 183 had early mild cognitive impairment.

The investigators used human macrophages as a proxy for brain microglia to show that MS4A4A and TREM2 co-localized on lipid rafts at the plasma membrane, that sTREM2 increased with MS4A4A overexpression, and that silencing of MS4A4A reduced sTREM2 production. These genetic, molecular, and cellular findings suggested that MS4A4A was a modulator of sTREM2.

"We observed TREM2 risk variants more often in people who had Alzheimer's or were mildly cognitively impaired, compared with those who were cognitively normal," said contributing author Dr. Celeste Karch, assistant professor of psychiatry at Washington University School of Medicine. "It turns out that about 30% of the population in the study had variations in the MS4A4A gene that appear to affect their risk for developing Alzheimer's disease. Some variants protected people from Alzheimer's or made them more resilient while others increased their risk."

The study was published in the August 14, 2019, online edition of the journal Science Translational Medicine.