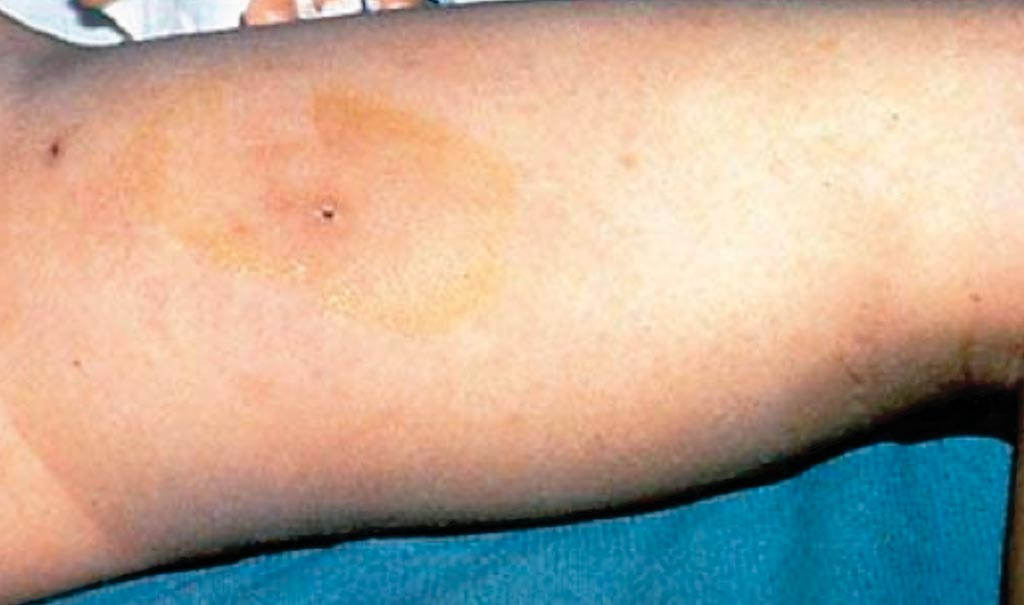 Image: An area of mild erythema around varicella lesion on the thigh of a young boy progressed to necrotizing fasciitis caused by group A Streptococcus (Photo courtesy of Dr. E. P. Dellinger, MD).
Necrotizing fasciitis (NF) is a life-threatening deep soft tissue infection characterized by rapidly progressive necrosis of the fascia and the adjacent soft tissues. NF of the extremities is associated with high mortality rates, and immediate surgical intervention is required upon detection of NF infections.

Early diagnosis and bacterial identification are essential for adequate surgical treatment and appropriate antibiotic administration in patients with NF. The clinical signs and symptoms of NF caused by Gram-positive and Gram-negative microorganisms are characteristically indistinguishable at the time of presentation. Moreover, it takes 3 to 4 days to obtain the results of microbiological analysis and antimicrobial sensitivity testing of the specimens.

Scientists from Chang Gung Memorial Hospital (Taoyuan City, Taiwan) collected samples from 99 patients with surgically confirmed NF of the extremities who were hospitalized consecutively between June 2015 and November 2017. Two sets of blood and tissue samples were collected from all patients; one set was sent to a microbiology laboratory for bacterial identification and the other set was sent to an immunohistochemistry laboratory for polymerase chain reaction (PCR) amplification.

The culture specimens were obtained from the infected wounds or the blood, and were identified by microbiological evaluation. Genomic bacterial DNA extraction was performed and 16S rDNA universal PCR was performed for each sample to validate the results of the multiplex PCR assay. Total genomic DNA was purified using a Geneaid Bacteria Genomic DNA Kit and amplified. PCR amplicons were analyzed by electrophoresis in 2% agarose gel.

The authors concluded that the accuracy rate of the multiplex PCR presenting positive results in these culture-positive tissue samples was 87.5% (28/32). This suggests that multiplex PCR of tissue specimens may be a useful and rapid diagnostic tool for the detection of these lethal microorganisms in patients with NF. The study was published in the April 2019 issue of the International Journal of Infectious Diseases.