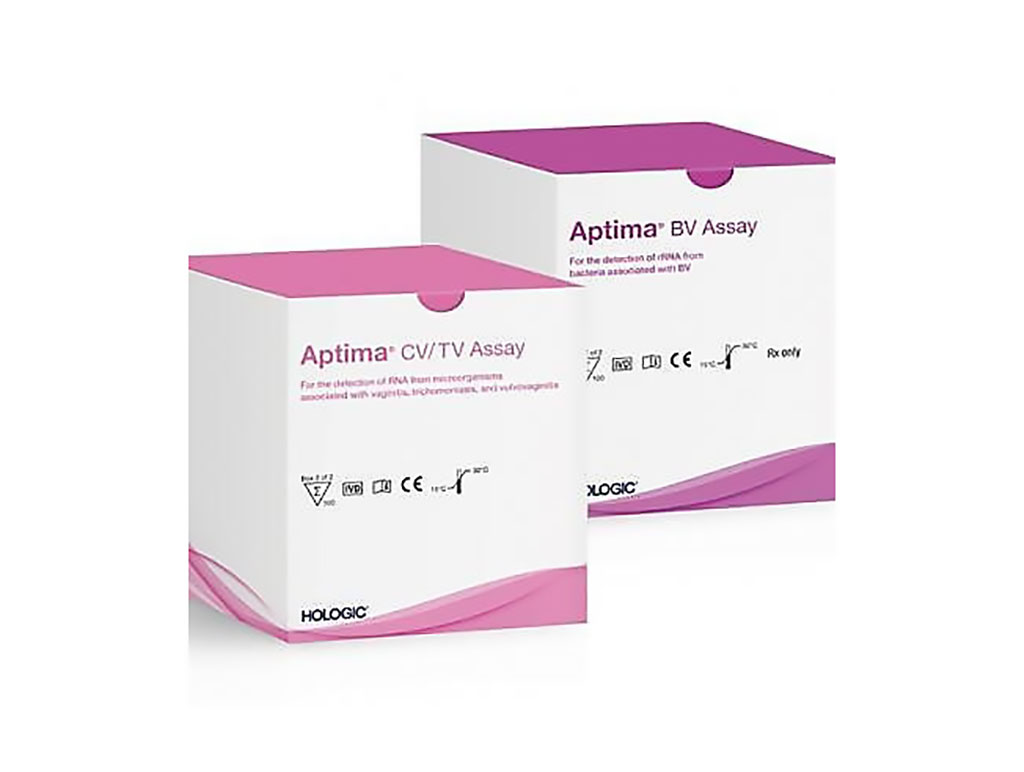 Image: The Aptima BV and Aptima CV/TV assays for the diagnosis of infectious vaginitis (Photo courtesy of Hologic).
Gynecologist visits in the USA are motivated by an inflammation of the vagina called vaginitis. Infectious vaginitis due to bacterial vaginosis (BV), vulvovaginal candidiasis (VVC), and Trichomonas vaginalis accounts for a significant proportion of all gynecologic visits in the USA.

A team of medical microbiologists working with the University of Alabama at Birmingham (Birmingham, AL, USA) conducted a prospective multicenter clinical study to validate the performance of two new in vitro diagnostic transcription-mediated amplification nucleic acid amplification tests (NAAT) for diagnosis of BV, VVC, and trichomoniasis. The trial involved more than 1,400 vaginitis patients at 21 trial sites. Six vaginal swabs, including one self-collected by the patient, were used to determine the accuracy of the two molecular tests, with results for each target of the two new tests compared to gold standard diagnostic testing and clinical evaluations.

Patient- and clinician-collected vaginal swab samples obtained from women with symptoms of vaginitis were tested with the Aptima BV and Aptima CV/TV assays (Hologic, Marlborough, MA, USA). The results of the assays were compared to Nugent score (plus Amsel for intermediate Nugent) for BV, Candida cultures and DNA sequencing for VVC, and a composite of a NAAT and culture for T. vaginalis.

The scientists reported that the prevalence of infection was similar for clinician- and patient-collected samples: 49% for BV, 29% for VVC due to Candida species group, 4% for VVC due to C. glabrata, and 10% for T. vaginalis. The BV test has a sensitivity of 95% and a specificity of 90% compared to the reference methods. For the CV/TV test, sensitivity and specificity were 92% and 86%, respectively, for Candida species group, 85% and 99% for C. glabrata, and 97% and 99% for T. vaginalis. Sensitivity and specificity were also similar in the clinician-collected and patient-collected samples. The molecular tests detected more co-infections than the reference methods, 25% of patients versus 20%.

The authors concluded that overall, the investigational assays had higher sensitivity and specificity than clinician's diagnoses and in-clinic assessments, indicating the investigational assays were more predictive of infection than traditional diagnostic methods. These results provide clinical efficacy evidence for two IVD NAATs that can detect the main causes of vaginitis. The study was published online on November 20, 2019 in the Journal of Clinical Microbiology.

University of Alabama at Birmingham
Hologic