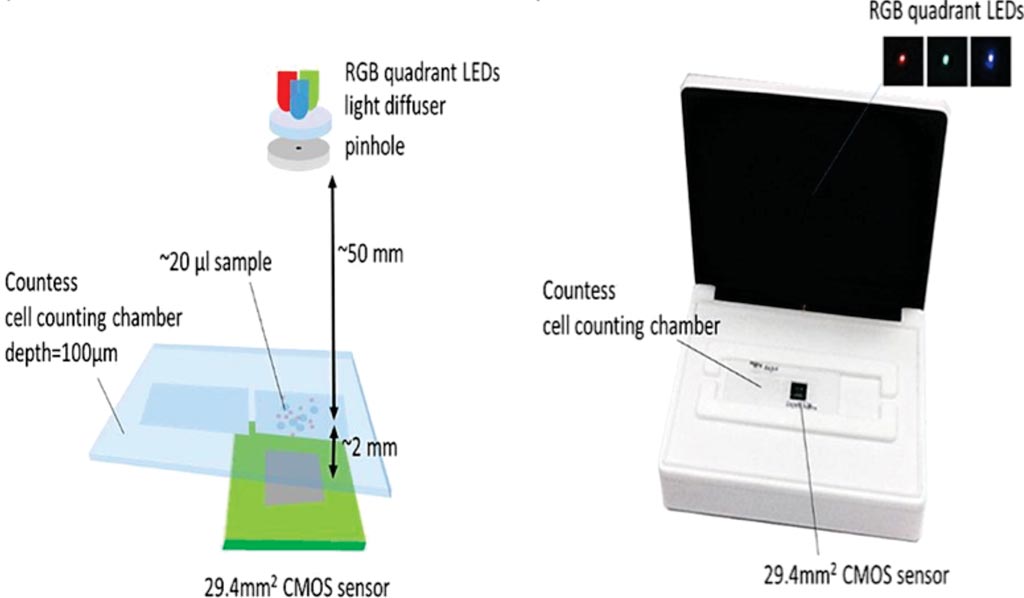 Image: The setup for the lens-free analysis of cerebrospinal fluid clinical specimen (Photo courtesy of Aix Marseille University).
The performance of the cytological analysis of the cerebrospinal fluid (CFS) and enumerating leukocytes and erythrocytes is a routine first step in the laboratory diagnosis of meningitis. CSF cytology and cell counting is routinely performed by optical microscopy.

Optical microscopy observation is an operator-dependent task, with both counting itself and the subsequent reporting being subject to variability; this may indeed result in the erroneous classification of the CSF specimen as meningitis or non-meningitis.

Scientists at Aix Marseille University conducted a prospective blind inter-operator variability study was for two months. It consisted of optical microscopy cell counting conducted by five different operators on 35 consecutive and independent CSF specimens. The cell counts were performed on Glasstic 10 counting slides with grids, performing the count of leukocytes and erythrocytes in the nine cell segmentations corresponding to the count per mm3.

The optical microscope used in the study was an Olympus CX41. To compare the microscope results the team, used a lens-free microscopy algorithm adapted for counting cerebrospinal fluid cells and discriminating leukocytes from erythrocytes was modified step-by-step in the prospective analysis of 215 cerebrospinal fluid specimens. The acquisition was sequential, and each red, green and blue LED was lit up one after the other, while the three corresponding wide-field holograms were acquired by the complementary metal-oxide semiconductor (CMOS) sensor (red, green, and blue).

In the first step, prospective optical microscopy counts of leukocytes done by five different operators yielded an overall 16.7% misclassification of 72 cerebrospinal fluid specimens in meningitis/non-meningitis categories using a 10 leukocyte/μL cut-off. In the second step, the definite algorithm yielded a 100% sensitivity and an 86% specificity compared to confirmed diagnostics. In the third step, a blind lens-free microscopic analysis of 116 cerebrospinal fluid specimens, including six cases of microbiology-confirmed infectious meningitis, that yielded a 100% sensitivity and 79% specificity.

The authors concluded that adapted lens-free microscopy is thus emerging as an operator-independent technique for the rapid numeration of leukocytes and erythrocytes in cerebrospinal fluid. In particular, this technique is well suited to the rapid diagnosis of meningitis at point-of-care laboratories. The study was published on January 3, 2017, in the journal Scientific Reports.