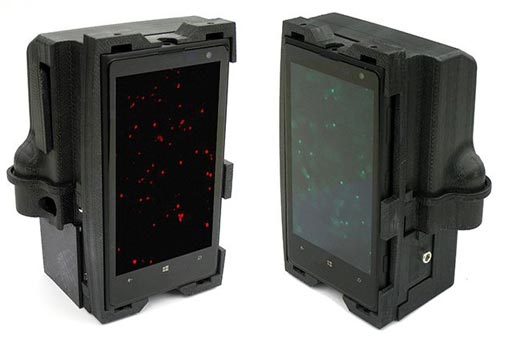 The device, which can image and analyze specific DNA sequences and genetic mutations in tumor cells and tissue samples without prior DNA extraction, was developed through the collaborative efforts of a group of investigators at the University of California, Los Angeles, Stockholm University, and Uppsala University.

The investigators used a three-dimensional printer to produce a lightweight optical attachment to be used with a standard smartphone camera. The device is able to capture multi-color fluorescence and bright-field images of the same quality as those obtained by traditional light microscopy.

The device analyzes a tissue or cell sample in a dedicated container by recording multi-mode images of the sample during processing and feeding the data to an algorithm. The algorithm automatically analyzes the images to read the sequenced bases of the extracted tumor DNA and identifies genetic mutations directly inside the tumor tissue.

“It is very important to have these molecular testing approaches at a doctor’s office or where care is being given,” said senior author Dr. Mats Nilsson, professor of biochemistry and biophysics at Stockholm and Uppsala Universities. “Oftentimes, advanced lab-based testing is performed at major hospitals, which is limiting, as not everyone has access to a hospital that can perform these tests.”

The device was described in detail in the January 17, 2017, online edition of the journal Nature Communications.