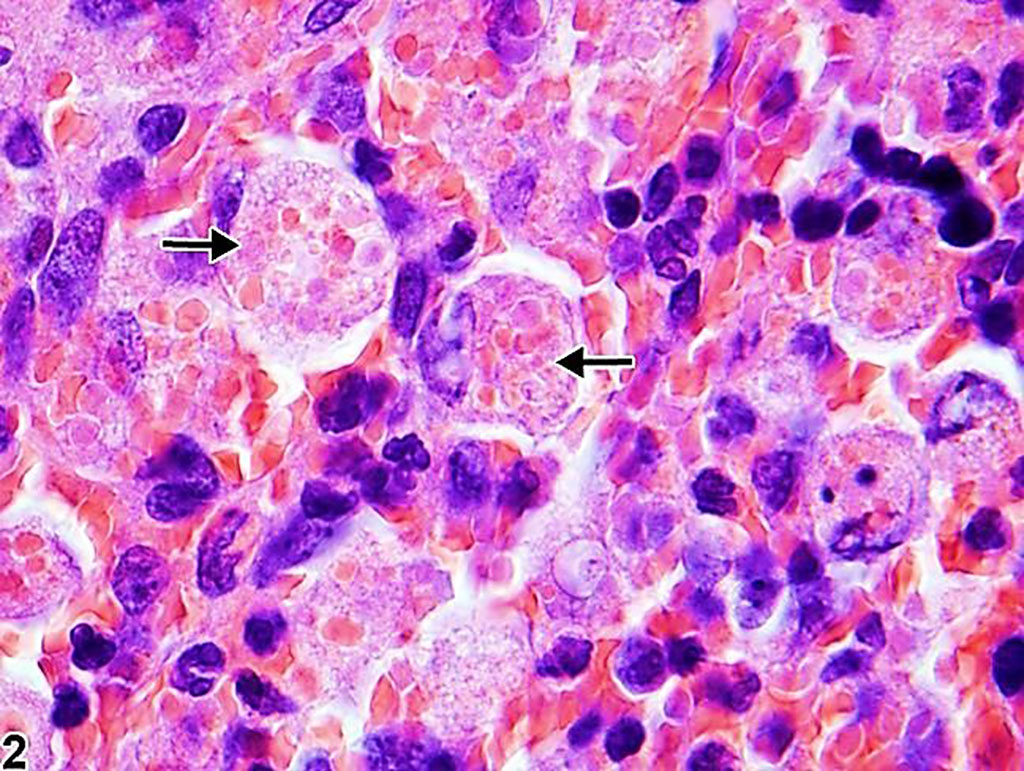 Image: Erythrophagocytosis by splenic macrophages (arrows): DNA binding to TLR9 expressed by red blood cells promotes innate immune activation and anemia (Photo courtesy of Tekportal)
Red blood cells (RBCs) are essential for aerobic respiration through delivery of oxygen to distant tissues. However, RBCs are currently considered immunologically inert, and few, if any, secondary functions of RBCs have been identified.

Although non–gas exchanging functions of the red cell such as chemokine regulation, complement binding, and pathogen immobilization have been described, RBC immune function remains enigmatic. RBCs transit through all tissues and contact pathogen and self-derived inflammatory mediators in the circulation, positioning them as ideal messengers between distant organs.

A large team of Clinical Scientists led by those at the University of Pennsylvania School of Medicine (Philadelphia, PA, USA) examined the red blood cells of about 50 sepsis patients and 100 COVID-19 patients and found that, during these illnesses, red blood cells express an increased amount of the specific Toll-like receptors (TLR) protein called TLR9 on their surface. TLRs are a class of proteins that play a key role in the immune system by activating immune responses like cytokine production. Hemoglobin parameters were collected from the electronic medical record complete blood count on days 0 and 7, selecting the lowest value from the day if more than one measurement was available per day.

The investigators showed that when the red blood cells bind too much inflammation-causing nucleic acid, they lose their normal structure, causing the body to not recognize them anymore. This leads to erythrophagocytosis by splenic macrophages, resulting in acute anemia. When this happens it causes the immune system to become activated in otherwise unaffected organs, creating inflammation. This mechanistic discovery opens the door to studies on how to block this specific receptor and create targeted therapies for autoimmune diseases, infectious diseases, and a whole host of inflammatory illnesses associated with acute anemia.

The detection and capture of nucleic acid by TLR9-expressing RBCs regulated red cell clearance and inflammatory cytokine production, demonstrating that RBCs function as immune sentinels during pathologic states. Consistent with these findings, RBC-bound mitochondrial DNA was elevated in individuals with viral pneumonia and sepsis secondary to coronavirus disease 2019 (COVID-19) and associated with anemia and severity of disease.

Nilam Mangalmurti, MD, an assistant professor and senior author of the study, said, “Anemia is common, affecting about a quarter of the world’s population. Acute inflammatory anemia is often seen early after an infection such as parasitic infections that cause malaria. For a long time we haven’t known why people, when they are critically ill from sepsis, trauma, COVID-19, a bacterial infection, or parasite infection, develop an acute anemia. These findings explain one of the mechanisms for the development of acute inflammatory anemia for the first time.”

The authors concluded that they had demonstrated that RBCs serve as DNA sensors through surface expression of TLR9, which appears to be beneficial during quiescent states, where it promotes scavenging of trace CpG to prevent nonspecific inflammation. However, during conditions characterized by excess circulating CpG, such as sepsis and COVID-19, binding of CpG by RBC-TLR9 leads to accelerated clearance and inflammation. The study was published on October 20, 2021 in the journal Science Translational Medicine.