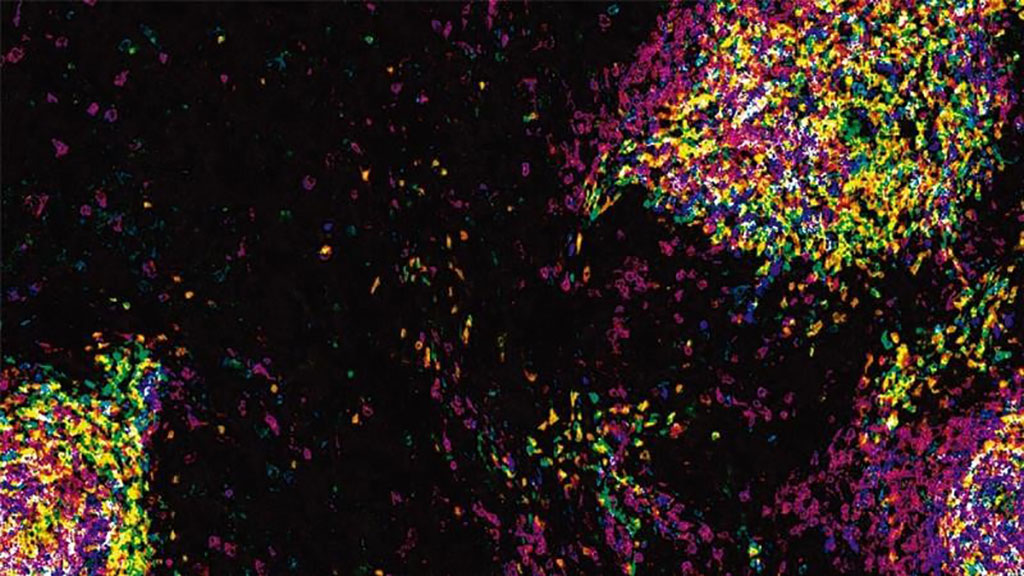 Image: Aggregates of immune cells known as tertiary lymphoid structures (TLSs), seen here within a tumor of the soft tissues known as a rhabdomyosarcoma, are major players in the immune system’s fight against cancer (Photo courtesy of Johns Hopkins Kimmel Cancer Center).
Immunotherapies such as checkpoint inhibitors that enhance the body's natural ability to fight cancer have been only minimally successful in treating sarcomas which are rare cancers that grow in the soft tissues and bones.

The investigators discovered that both tumor types were ripe with tumor-associated macrophages (TAMs). Heavily involved in promoting tumor initiation and growth, TAMs hamper the proper immune reaction against tumors. Additionally, both sarcomas had similar amounts of CD8+ T lymphocytes (CD 8+ T cells are also known as "killer T cells"), immune system cells that protect the body from infection and are believed to be among the front-line soldiers in the fight against cancers. They also discovered that where the CD8+ T cells congregated and how their antitumor functions were impeded by TAMs differed in the two sarcomas.

In UPS, the group found that the tumors themselves were filled with TAMs and CD8+ T cells. With constant stimulation by tumor antigens, CD8+ cells produce large amounts of PD-1, a protein that eventually exhausts the T cell population. When this happens, the authors suggest, and TAMs control the environment, normal T cell activity against the cancer is suppressed. In rhabdomyosarcomas, they found CD8+ T cells only within tiny aggregates of immune cells called tertiary lymphoid structures (TLSs). TLSs are known to play a major role in initiating antitumor immune responses, helping the immune system recognize cancer cells as targets.

Nicolas Llosa, MD, an assistant professor of oncology and senior author of the study said, “The basis of successful immunotherapy lies in the ability of the immune system to recognize cancer as foreign and attack, and is dependent on genetics, host and environmental factors, and makeup of the tumor microenvironment. We need to understand the immune niche that sustains these tumors and how it supports tolerance, so we can determine what drug targets could be used to help mount a better response.”

The authors concluded that their work in soft tissue sarcomas revealed an immunosuppressive TME dominated by myeloid cells, which may be overcome with activation of T cells that traffic into the tumor. In rhabdomyosarcomas, targeting T cells found within TLS may be crucial to achieve antitumor response. The study was published on June 16, 2020 in the journal Clinical Cancer Research.

Urinalysis is a convenient and non‐invasive screening tool for use in both an outpatient and inpatient setting. Automated flow cytometry‐based urine analyzer is increasingly being used to identify and... Read more