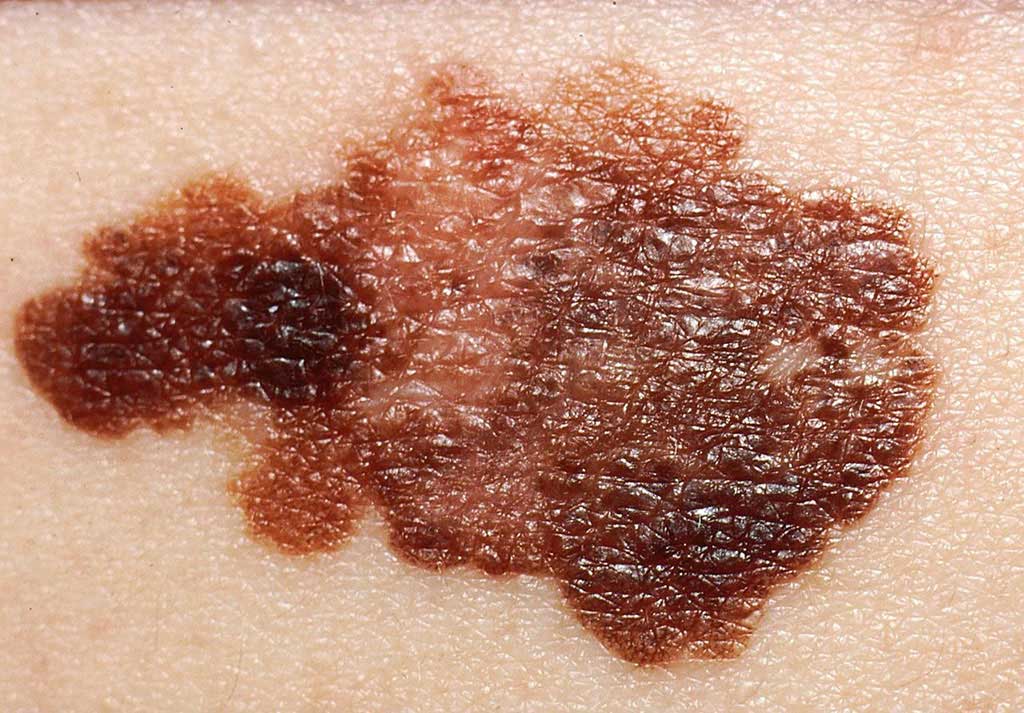 Image: A melanoma on a patient`s skin: a new test predicts which melanoma patients are at risk of cancer recurrence and metastases (Photo courtesy of US National Cancer Institute).
Many primary melanomas can be cured by having this lesion removed, but melanoma can also recur and spread; an analysis of the removed lesion can offer some information on the likelihood that the cancer will recur.

Despite advances in molecular diagnostics for other forms of cancer, analysis of a skin cancer lesion is surprisingly simplistic. The lesion's thickness, patients with thinner melanomas tend to do better, and microscopic features, such as ulcerations, are considered, and a T stage of 1 through 4 is assigned.

The investigators found that of all variables identified, the T-cell fraction (TCFr; or proportion of cells in the lesion that were T cells) was a powerful, independent predictor of which patients would progress. Even for patients whose lesion thickness (T) was the same, TCFr was able to predict which patients were more likely to have metastatic disease. Patients with a TCFr of lower than 20% were more at risk of disease progression than patients with a TCFr of higher than 20%. For example, for patients with T3 melanoma (2-4mm thickness), five years after having their primary lesion removed, 51% of those with lower TCFr experienced recurrence, compared to 24% with higher TCFr.

Thomas S. Kupper, MD, a dermatologist and senior author of the study, said, “This is a simple, elegant test. It's quantitative rather than subjective, and it may be able to add value to predictions about disease progression. In the future, such a test could help us tailor treatment; patients with high TCFr may further benefit from checkpoint inhibitor therapy, while low TCFr patients may need additional intervention.”