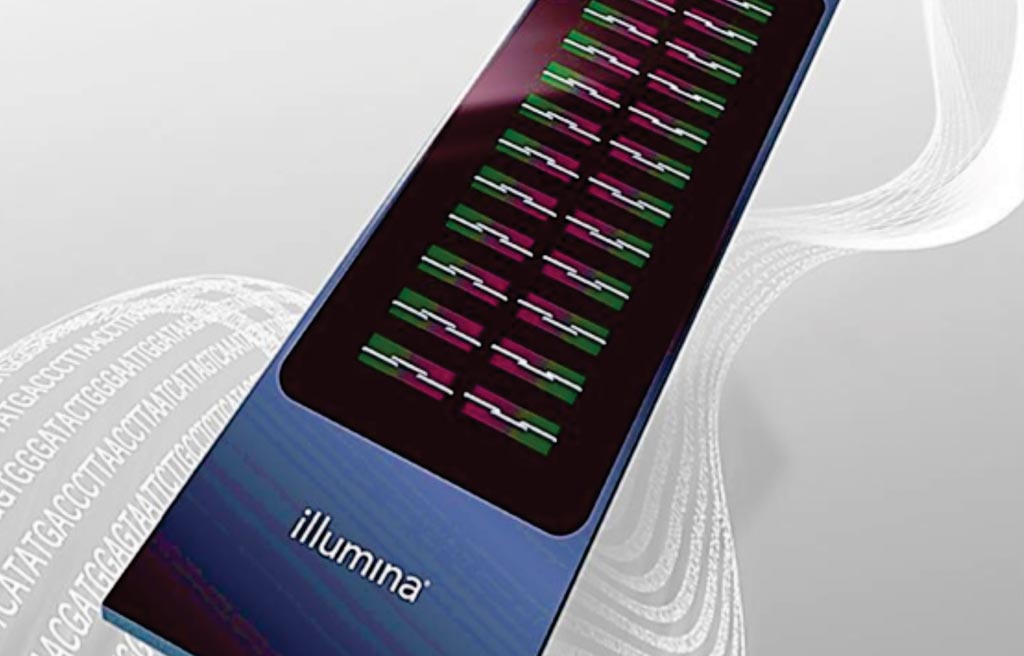 Image: A multiple sclerosis chip (MS chip) was designed using the Illumina iSelect platform (Photo courtesy of Illumina).
Multiple sclerosis (MS) is an autoimmune inflammatory degenerative disease of the central nervous system that often starts in young adulthood and affects 2.3 million individuals worldwide. While prior genetic studies have implicated the adaptive immune system in the disease, in particular T cells, much of the genetic architecture of MS has remained unknown.

The team identified 233 associations with MS susceptibility that had genome-wide significance, including 32 loci on the major histocompatibility complex and one on the X chromosome. The latter might help explain why MS affects almost three times more women than men. Using gene expression and epigenomic data for T cells, monocytes, peripheral blood mononuclear cells, and prefrontal cortex tissue, the scientists found that MS risk loci are enriched in many types of immune cells and tissues, as well as in microglia, which are the immune cells of the brain, but not in other types of brain cells. Together with other functional studies into the effects of MS risk variants, they identified a list of 551 putative MS susceptibility genes with involvement in both innate and adaptive immune responses, many of which have roles in the development, maturation, and differentiation of B cells, T cells, natural killer cells, and myeloid cells.

The authors concluded that beyond the characterization of the molecular events that trigger MS, this map will also inform the development of primary prevention strategies because they can leverage this information to identify the subset of individuals who are at greatest risk of developing MS. Although insufficient by itself, an MS genetic risk score has a role to play in guiding the management of the population of individuals 'at risk' of MS (such as family members) when deployed in combination with other measures of risk and biomarkers that capture intermediate phenotypes along the trajectory from health to disease. The study was published on September 27, 2019, in the journal Science.