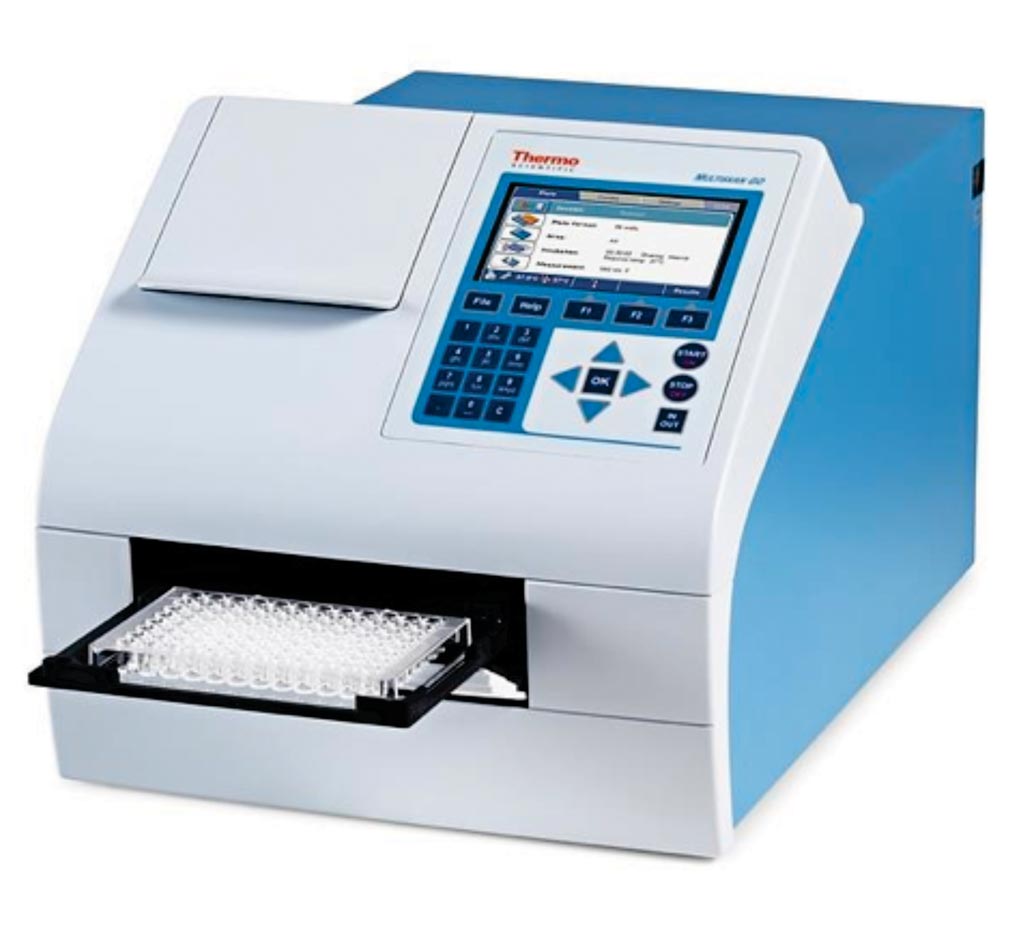 Image: The Multiskan GO microplate spectrophotometer (Photo courtesy of Thermo Fisher Scientific).
Visceral leishmaniasis (VL) is caused by Leishmania infantum [synonymous L. chagasi] in the New World or L. donovani in the Old World, VL can be classified as an anthroponotic or zoonotic disease because it is transmitted between humans and others mammals, such as dogs.
Visceral leishmaniasis in humans presents with fever, anemia, and splenomegaly and can be lethal if not treated. Nevertheless, the majority of L. infantum-infected individuals don’t manifest symptoms, and remain so provided they are not immunosuppressed. Direct and indirect methods are used for diagnosis of VL.

A team of scientists working with the Ribeirão Preto School of Medicine (Ribeirão Preto, Brazil) included in a study of patients with VL before and after treatment, who were hospitalized in the city of Teresina, and volunteers without any symptom of the disease residing in the same city. Sample collections were carried out between August and November 2017. Samples obtained from healthy volunteers residing in the city of Ribeirão Preto, were used as control of non-endemic area. The diagnosis of VL was confirmed by the positivity of amastigote forms in samples of bone marrow aspirate stained by Giemsa, and confirmed by cell culture in NNN medium.

The scientists reported that Kalazar Detect and OnSite detected, respectively, 76% and 64% of patients presenting with active VL; 50% and 57% of patients remained positive in these tests, respectively, after treatment. Of the healthy participants in the study who were living in the endemic area, only 1.7% were positive with both of the IC tests. On the other hand, reactivity in ELISA tests revealed that 13% of these individuals presented asymptomatic infections; among VL patients, 84% presenting with active disease were reactive in ELISA and after treatment, 55.5% were seropositive. L. infantum DNA was present in the blood of 37.9% of infected individuals living in the endemic area, while IP-10 and MIG biomarkers were detected in 26.7% of them.

The authors concluded that the association of different techniques can detect asymptomatic infections, however, more investigation is necessary to develop ideal biomarkers that are simple to use in the clinic and in field studies in areas endemic for visceral leishmaniasis. The study was published on July 1, 2019, in the journal PLOS Neglected Tropical Diseases.