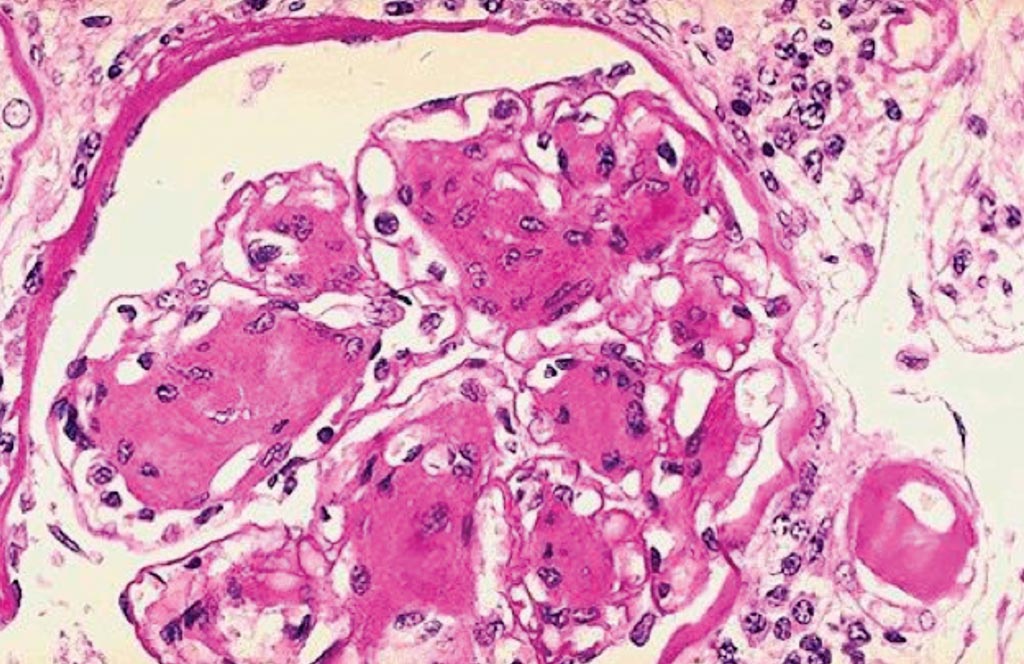 Image: A histopathology of nodular glomerulosclerosis in a patient with long-standing diabetes mellitus. Note the markedly thickened arteriole at the lower right, which is typical for the hyaline arteriolosclerosis that is seen in diabetic kidneys as well (Photo courtesy of University of Utah).
Type 1 diabetes, once known as juvenile diabetes or insulin-dependent diabetes, is a chronic condition in which the pancreas produces little or no insulin. Insulin is a hormone needed to allow sugar (glucose) to enter cells to produce energy.

One cause of kidney failure is diabetes mellitus, a condition characterized by high blood glucose levels. Over time, the high levels of sugar in the blood damage the millions of filtering units within each kidney and this eventually leads to kidney failure. Around 20% to 30% of people with diabetes develop kidney disease (diabetic nephropathy), although not all of these will progress to kidney failure.

The team reported that high levels of serum PRO-C6 were independently associated with a higher risk of all-cause mortality (HR 2.26). Based on median cutoffs, serum PRO-C6 measures of 7.5 ng/mL or more were associated with reduced eGFR, increased urinary albumin excretion rate and greater diabetes duration. The team noted that noted this increased mortality risk was present but only for participants with a urinary albumin excretion rate of less than 30 mg per 24 hours. In addition, an association between serum PRO-C6 and a worsening of 30% or more in eGFR was observed only in participants who had a baseline eGFR of more than 30 mL/min/1.73 m2. The scientists noted that end-stage renal disease (ESRD) was 8.45 times more likely to develop in participants with serum PRO-C6 measures of at least 7.5 ng/mL (HR = 8.45).

Sascha Pilemann-Lyberg, MD, PhD, the first author of the study, and her colleagues said, “Collagens are an essential part of the fibrotic structure, acting as a scaffold for a range of [extracellular matrix] molecule interactions and cell adhesion. “Because increased collagen formation and reduced degradation are closely linked with the development of fibrosis, assessment of collagen formation and degradation may identify patients with active fibrosis at higher risk of CV [events] and heart failure, mortality, and rapid deterioration of kidney function.” The study was published in the July 2019 edition of the journal Diabetes Care.