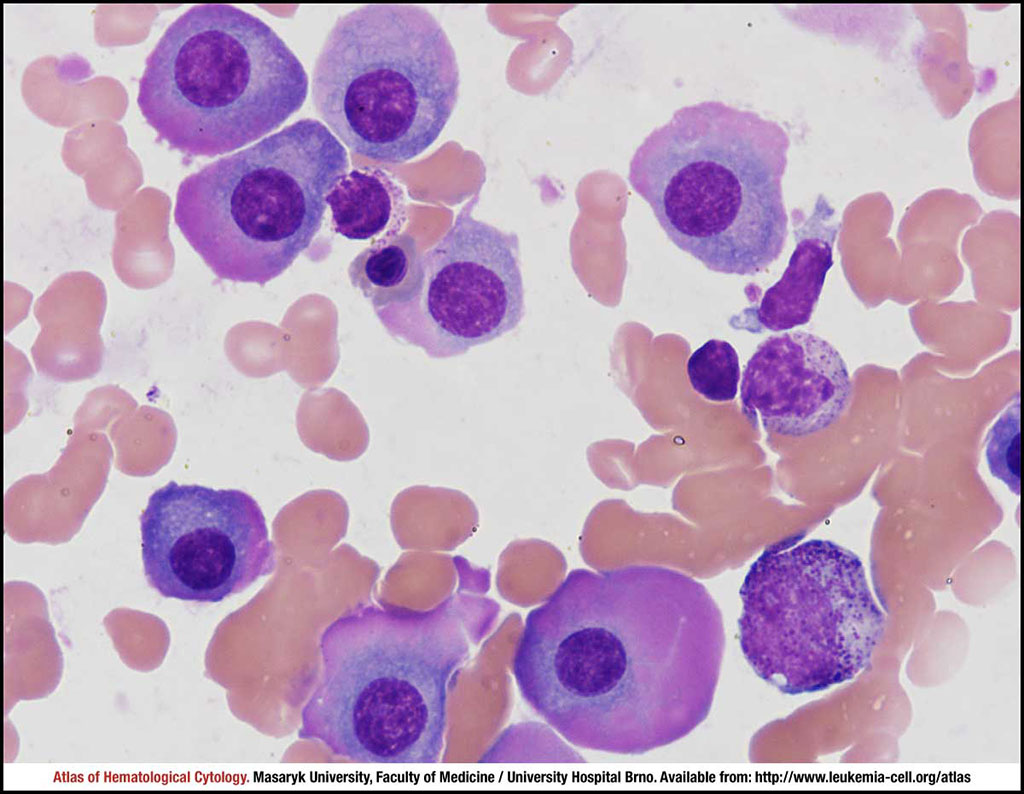 Image: Bone marrow aspirate from a patient with multiple myeloma: Myeloma plasma cells with prominent anisocytosis and relatively small nuclei. Note the marginal carminophilia of cytoplasm, which is rather marked in this case (Photo courtesy of Masaryk University)

Despite the improvement of multiple myeloma (MM) risk assessment, some patients still show dismal outcomes. Retrospective and real-world studies confirmed that the detection of circulating tumor plasma cells (CTC) is a biomarker of adverse outcome.

Hematologists at the University of Torino (Torino, Italy) and their colleagues prospectively assessed CTC at diagnosis of myeloma in the phase II multicenter, randomized FORTE trial, which included transplant-eligible patients younger than 65. Data on CTC analysis included 401 patients, 269 of whom had detectable levels. The median CTC percentage was 0.02%, which corresponded to a median absolute number of 1.24 cells/µL. Median follow-up for the study population was 50 months. CTC were analyzed at diagnosis with two-tube single-platform flow cytometry (sensitivity 4 × 10–5) and minimal residual disease (MRD) was assessed by second-generation multiparameter flow cytometry (sensitivity 10–5).

The team reported that using the 0.07% cutoff, investigators identified 130 patients as CTC-high and 271 as CTC-low. About half of the CTC-low group had undetectable CTCs. Patients in the CTC-high group had lower rates of MRD negativity (42% versus 59%) and lower rates of complete response to induction therapy (43% versus 54%). By multivariable analysis, the CTC-high group had significantly worse progression-free survival (PFS: HR = 2.61) and overall survival (OS: HR = 2.61). The CTC-high group had inferior 4-year PFS (38% versus 69%) and 4-year OS (68% versus 92%). The CTC levels, but not the bone marrow plasma cell levels, affected the outcome. The only factor that reduced the negative impact of CTC-high was the achievement of MRD negativity.

The authors concluded that in multiple myeloma, increasing levels of CTC above an optimal cutoff represent an easy-to-assess, robust, and independent high-risk factor. The achievement of MRD negativity is the most important factor that modulates their negative prognostic impact. The study was published on June 6, 2022 in the Journal of Clinical Oncology.