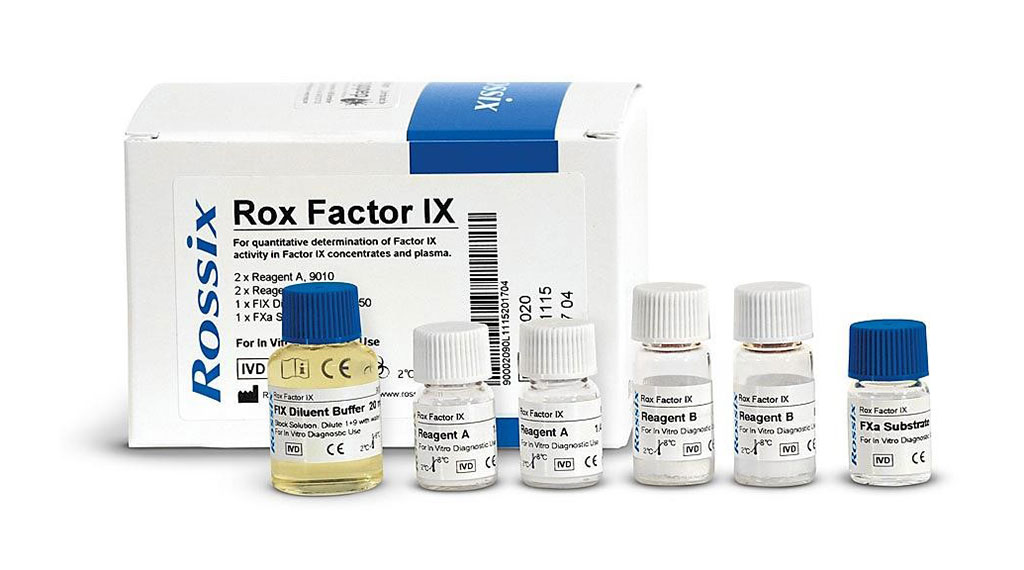 Image: An assay kit for the determination of Factor IX activity in plasma and Factor IX preparations, including potency assignment of FIX concentrates. The lack of increase in FIX activity, in contrast to FVIII activity, during pregnancy is likely to have contributed postpartum hemorrhage (Photo courtesy of Cryopep)
Pregnancy influences the levels of blood clotting factors. In healthy women, the activity of factor VIII (FVIII), the missing coagulation factor in hemophilia A, more than doubles in the third trimester and drops back to normal levels within days following delivery. Conversely, factor IX (FIX) activity, the clotting factor defective in hemophilia B, increases slightly or remains the same during normal pregnancy.

In female carriers of hemophilia A, who have a deficiency in FVIII, the activity of this clotting factor can also increase significantly during pregnancy and reach normal levels in most cases. For hemophilia B carriers, however, FIX levels do not rise significantly and remain low during pregnancy. Although most carriers have normal pregnancies without any bleeding complications, factor levels should be tested in the third trimester of pregnancy when they are at their highest.

Hematologists at Sahlgrenska University Hospital (Gothenburg, Sweden) and their colleagues wanted to determine the risk of bleeding among pregnant hemophilia A and B carriers under routine clinical practice in Sweden. They also wanted to evaluate the rate of maternal and neonatal complications. They retrospectively analyzed data from 298 pregnancies in 153 hemophilia A carriers, and 51 pregnancies in 27 hemophilia B carriers, between 1987 and 2013, collected from the Swedish Medical Birth Register and the country’s National Patient Register. The control group consisted of 3,494 pregnancies.

The scientists looked at several maternal and neonatal characteristics, including the risk of bleeding after delivery or postpartum hemorrhage (PPH). In Sweden, the more recent definition of PPH is blood loss of more than 1,000 mL following vaginal delivery or cesarean delivery. A previous guideline defined PPH as blood loss of more than 600 mL for vaginal births. The team found that the risk of bleeding was more than three times higher in hemophilia B carriers than in non-carriers, but the risk for having other pregnancy complications, such as preeclampsia, was similar in all groups. PPH occurred in 7.4% of the hemophilia A carriers, 21.6% of the hemophilia B carriers, and 6.6% of the control group.

The authors concluded that the lack of increase in FIX activity, in contrast to FVIII activity, during pregnancy is likely to have contributed to this main finding, since hemophilia carriers typically have prepregnancy FVIII and FIX activities at about 50% of those in non-carrier women. There is an increased risk of PPH in unselected hemophilia B-carrier deliveries. The absence of increased FIX activity, but not FVIII activity, during pregnancy is likely to have influenced the results. The study was published on November 19, 2019 in the journal Haemophilia.