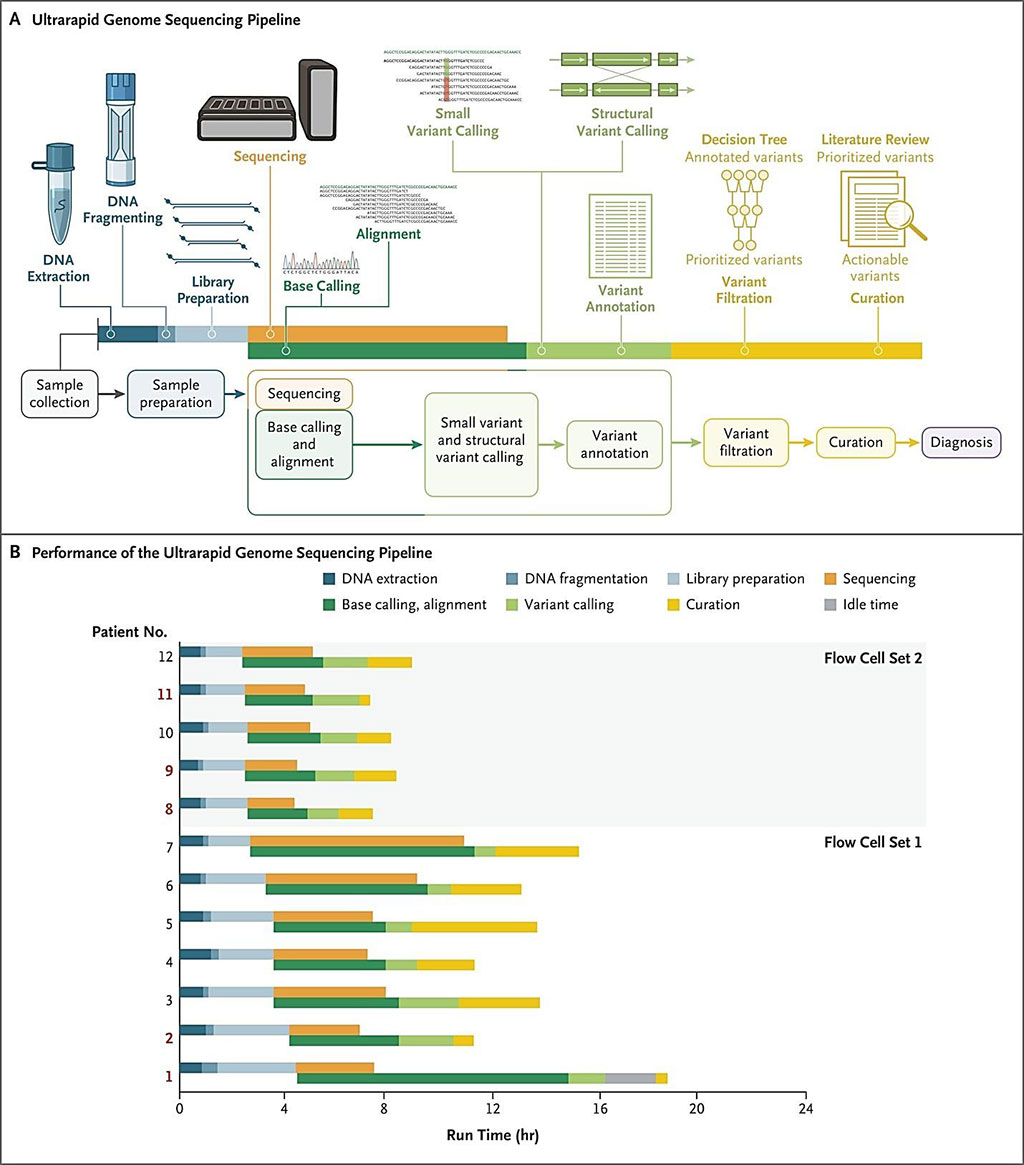 Image: The ultrarapid genome sequencing pipeline, indicating all processes from sample collection to a diagnosis. Vertically stacked processes are run in parallel (Photo courtesy of Stanford University)
A genetic diagnosis can guide clinical management and improve prognosis in critically ill patients, and much effort has gone into developing methods that result in rapid, reliable results.

Genome sequencing allows scientists to see a patient's complete DNA makeup, which contains information about everything from eye color to inherited diseases. Genome sequencing is vital for diagnosing patients with diseases rooted in their DNA: Once doctors know the specific genetic mutation, they can tailor treatments accordingly.

An International team of scientists led by those at Stanford University (Stanford, CA, USA) enrolled and sequenced the genomes of 12 patients, five of whom received a genetic diagnosis from the sequencing information in about the time it takes to round out a day at the office. Traditional genome-sequencing techniques chop the genome into small bits, spell out the exact order of the DNA base pairs in each chunk, then piece the whole thing back together using a standard human genome as a reference.

Standard tests screen a patient's blood for markers associated with disease, but they only scan for a handful of well-documented genes. Commercial labs, which often run these tests, are slow to update the molecules for which they screen, meaning it can take a long time before newly discovered disease-causing mutations are integrated into the test, and that can lead to missed diagnoses. That is why rapid genome sequencing could be such a game-changer for patients ailing from rare genetic disease.

To achieve super-fast sequencing speeds, the scientists needed new hardware. So they contacted colleagues at Oxford Nanopore Technologies (Oxford Science Park, UK) who had built a machine composed of 48 sequencing units known as flow cells. The idea was to sequence just one person’s genome using all flow cells simultaneously. In one of the cases, it took a swift 5 hours and 2 minutes to sequence a patient's genome. The team's diagnostic rate, roughly 42%, is about 12% higher than the average rate for diagnosing mystery diseases.

Euan Ashley, MB ChB, DPhil, professor of medicine, of genetics and of biomedical data science and a senior author of the study, said, “A few weeks is what most clinicians call 'rapid' when it comes to sequencing a patient's genome and returning results. Mutations that occur over a large chunk of the genome are easier to detect using long-read sequencing. There are variants that would be almost impossible to detect without some kind of long-read approach. It's also much faster so that was one of the big reasons we went for this approach. That's why rapid genome sequencing could be such a game-changer for patients ailing from rare genetic disease.” The study was published on January 12, 2022 in the journal The New England Journal of Medicine.