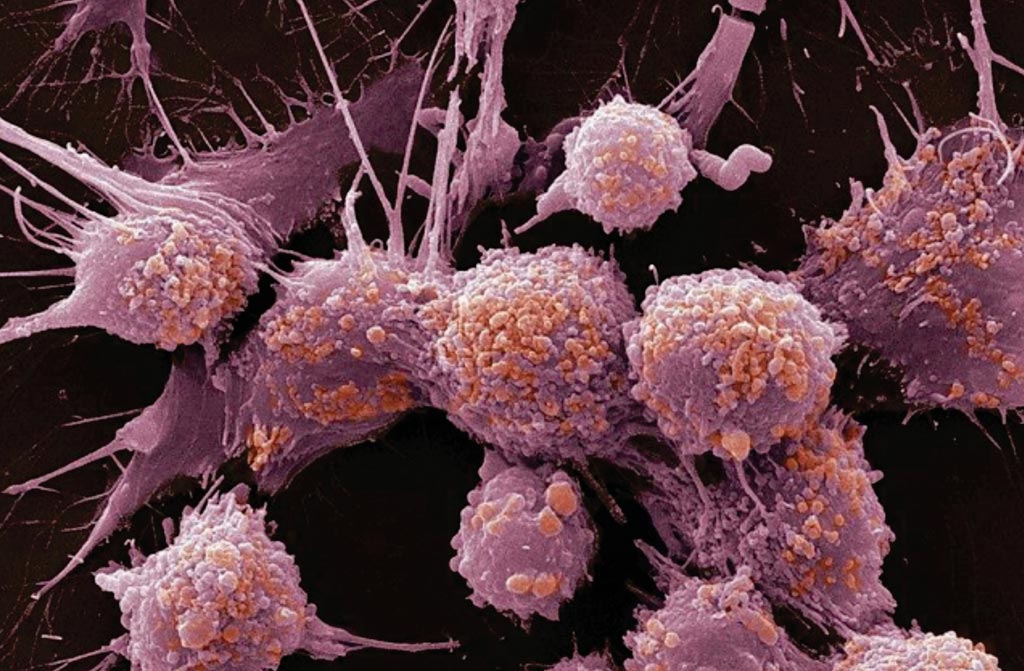 Image: A scanning electron micrograph (SEM) of prostate cancer cells (Photo courtesy of Sloan Kettering Institute).
Prostate cancer is cancer that occurs in the prostate, a small walnut-shaped gland in men that produces the seminal fluid that nourishes and transports sperm. Prostate cancer is one of the most common types of cancer in men.

If a gene necessary for DNA repair is hypermethylated, resulting in deficient DNA repair, DNA damages will accumulate. Increased DNA damage tends to cause increased errors during DNA synthesis, leading to mutations that can give rise to cancer.

An international team of scientists led by the Ontario Institute for Cancer Research (Toronto, ON, Canada) generated new whole-genome germline sequence data for 80 individuals with untreated prostate cancer, analyzing them alongside 161 germline genomes for treatment-naïve prostate cancer patients sequenced for past studies. After validation testing with data from the Cancer Genome Atlas (TGCA) project, which included tumor methylation profiles and exome sequence or single nucleotide polymorphism (SNP) array data generated from blood samples of prostate cancer patient, they settled on a set of almost 7,600 quantitative trait loci in the germline that appeared to influence methylation levels. From those, they narrowed in on 1,178 methylation quantitative trait loci (meQTL) in the genome that seemed to specifically influence DNA methylation levels in tumor tissue.

With chromatin immunoprecipitation sequencing and other analyses on prostate cancer cell lines or tumor samples, the team went on to explore the relationships between tumor meQTLs and other genomic features in the tumor; from histone modifications and chromatin structure to RNA and protein expression levels. They also searched for tumor meQTLs with potential ties to prostate cancer aggressiveness, identifying a suspicious germline locus in the TCERG1L gene as well as a chromosome 14 haplotype that appeared to influence methylation and expression of AKT1. Since altered AKT1 levels have been implicated in prostate cancer relapse risk, they went on to look for potential links to survival in another 101 individuals with prostate cancer, uncovering an apparent rise in relapse risk in those carrying the alternative allele at the AKT1 locus.

The authors concluded that taken together, these data highlight how germline genotypes can modulate the tumor epigenome to contribute to the tumorigenesis of aggressive prostate cancers. This phenomenon may apply to other tumor types, providing a strategy to create robust, minimally invasive biomarkers for the early detection of aggressive disease. The study was published on October 7, 2019, in the journal Nature Medicine.