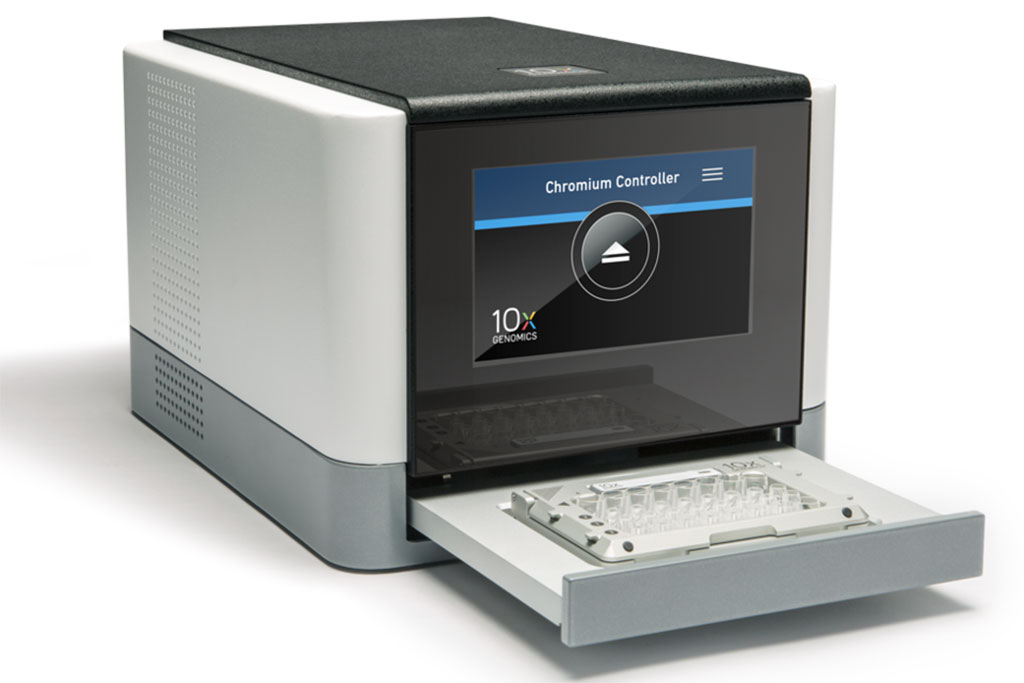 Image: The compact Chromium Controller advanced microfluidics platform enables high-throughput analysis. Each single use chip processes up to eight samples in parallel in less than 20 minutes. (Photo courtesy of 10×Genomics).
Mitochondrial diseases result from failure of mitochondria, specialized compartments within cells that contain their own DNA and produce the energy needed to sustain life. Some of the most challenging mitochondrial disorders arise from mutations in mitochondrial DNA (mtDNA), a high-copy-number genome that is maternally inherited.

These diseases manifest with marked clinical heterogeneity, in part because tissues generally contain a mixture of both non-mutant and mutant mtDNA, a phenomenon called heteroplasmy. Heteroplasmy varies dramatically across family members, tissues, and time and is hypothesized to be shaped by a combination of random drift and selection.

Medical scientists at the Massachusetts General Hospital (MGH, Boston, MA, USA) and their colleagues applied a single-cell genomics technology, mtDNA single-cell assay for transposase-accessible chromatin (ATAC) sequencing, to determine mtDNA heteroplasmy and cell type simultaneously in many thousands of peripheral-blood mononuclear cells (PBMCs) that were obtained from unrelated patients with Mitochondrial Encephalopathy, Lactic Acidosis, and Stroke-like episodes (MELAS). The team examined mtDNA within different blood cell types from nine individuals with MELAS, one of the most common forms of mtDNA disease associated with brain dysfunction and stroke-like episodes, with a wide range of severity across patients.

The team obtained samples of venous blood at clinical baseline and purified PBMCs from the patients. They stained cells for viability and applied antihuman CD45 antibodies before fixation and performed fluorescence-activated cell sorting (FACS) to exclude dead and non-leukocyte cells (CD45−). The mtDNA single-cell ATAC sequencing libraries were generated by a 10× Chromium Controller and a modified Chromium Single Cell ATAC Library and Gel Bead Kit protocol (10×Genomics, Pleasanton, CA, USA), which was followed by paired-end sequencing with the use of a NextSeq 500 platform (2× 72-bp reads) (Illumina, San Diego, CA, USA).

Melissa A. Walker, MD, PhD, a Pediatric Neurologist and senior author of the study, said, “What makes this study unique is that it is, to our knowledge, the first time anyone has been able to quantify the percentage of disease-causing mitochondrial DNA mutations in thousands of individual cells of different types from the same patient, as well as in multiple patients with inherited mitochondrial disease.” The study was published on August 12, 2020 in the New England Journal of Medicine.