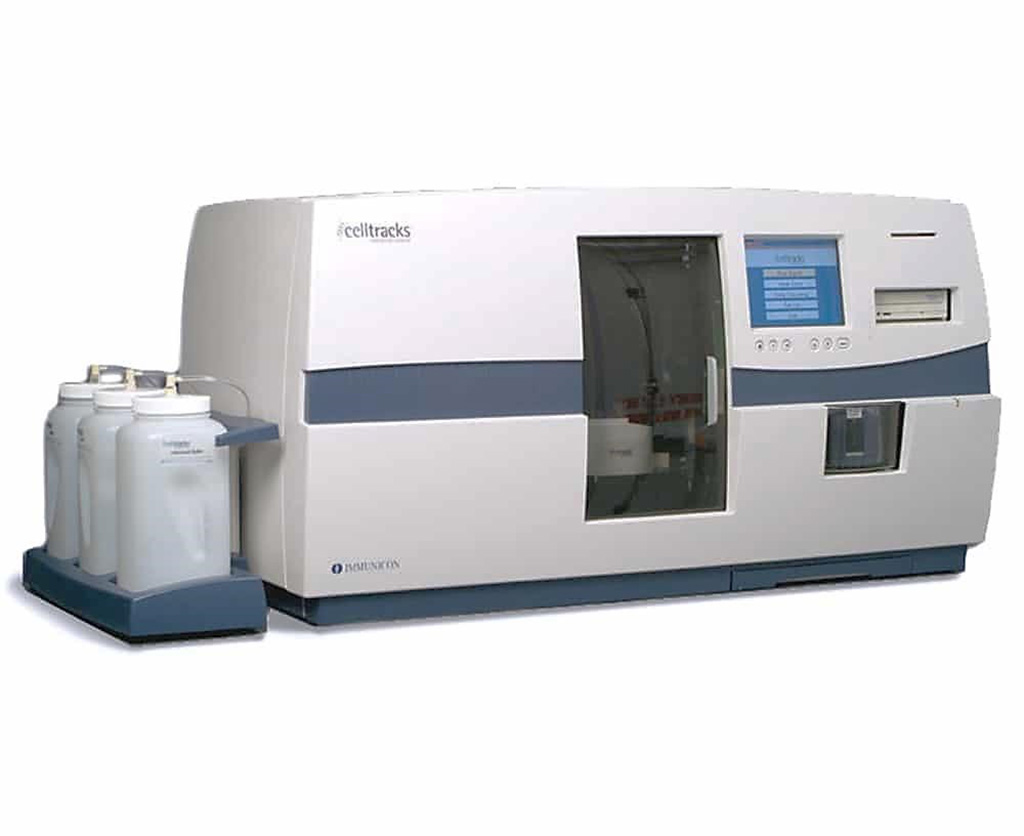 Image: The CELLSEARCH System is the first and only clinically validated, FDA-cleared system for identification, isolation, and enumeration of circulating tumor cells (CTCs) from a simple blood test (Photo courtesy of Menarini Silicon Biosystems).
Metastatic castration-resistant prostate cancer is when the cancer has spread to parts of the body other than the prostate, and it is able to grow and spread even though drugs or other treatments to lower the amount of male sex hormones are being used to manage the cancer.

A multi-gene risk score has been developed based on a group of copy number alteration (CNA) mutations in circulating tumor DNA (ctDNA) that it believes can predict metastatic castration-resistant prostate cancer (mCRPC) treatment response and survival outcomes.

Scientists at the Huntsman Cancer Institute (Salt Lake City, UT, USA) and their colleagues collected plasma samples from 88 chemotherapy-naïve mCRPC patients at an initial visit (prior to initiating abiraterone acetate and prednisone [AA/P] treatment) and at a follow-up visit 12 weeks later. The group followed patients until progression or until death to identify ctDNA-based somatic CNAs predictive of acquired AA/P resistance and prognostic of mCRPC status.

The team labeled the 48 patients that lacked PSA progression, had an absence of new bone lesions in a bone scan, and showed no evidence of radiological progression of metastases after 12 weeks as responders. However, the 36 patients who did not meet the criteria were labeled as non-responders with primary resistance. While ctDNA amounts in pretreatment and post-treatment samples dropped by about 4% in the responder cohort, they increased about 1% in the non-responder population. In 82 paired plasma samples, 21 showed a significant drop (3%) in ctDNA content, while 10 showed an increased ctDNA count (greater than 3%). It was noted that nine of the 10 (90%) of patients with increased ctDNA content were non-responders, whereas only 38% percent of patients with reduced ctDNA contents were non-responders.

The team tested 31 prostate cancer-related genes to evaluate candidate gene-specific CNAs and found that multiple genes, including AR, OPHN1, PIK3CA, and ZFHX3, are associated with primary resistance. They therefore developed a CNA-based risk score integrating associations with time to treatment change (TTTC), which were predictive of secondary resistance and established prognoses for survival based on CNAs in ZFHX3, RB1, PIK3CA, and OPHN1. The group also found that the multigenic risk scores were more predictive than individual genes or clinical risk factors.

The authors concluded that they had identified multiple novel loci, as candidate biomarkers for response to AA/P, as well as multigene risk scores for predicting resistance to AA/P treatment, disease progression, and survival. They believe that using plasma ctDNA CNAs and risk scores can potentially help clinicians predict mCRPC treatment and survival outcomes in patients. The study was published on March 18, 2020 in the journal Prostate Cancer and Prostatic Diseases.