WHO Warning: Rapid Tests Misdiagnose Many Cases of P. falciparum Malaria in Africa 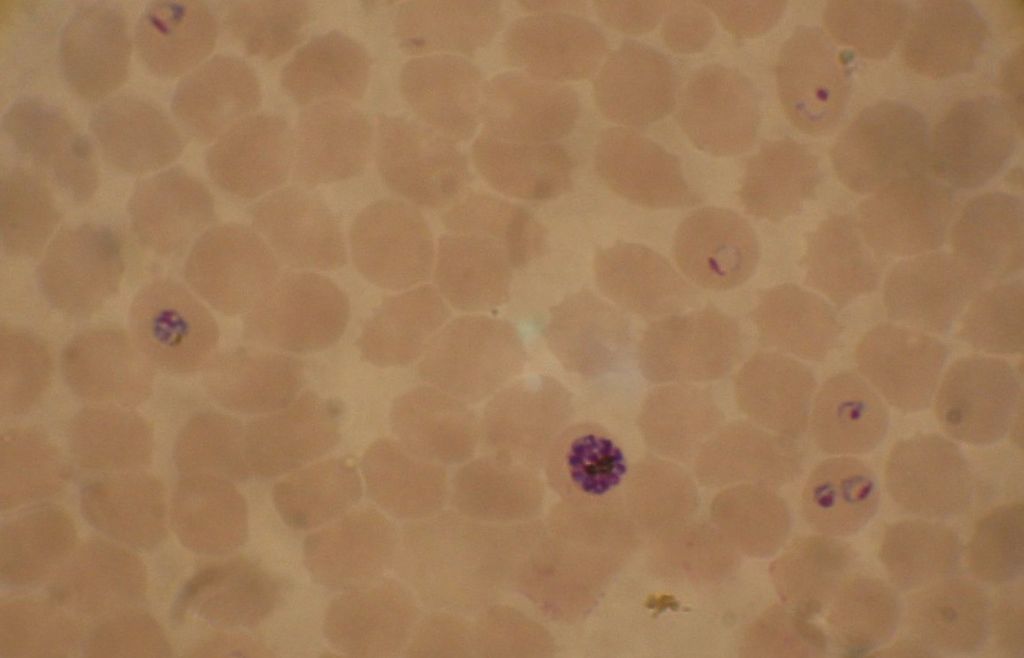 Image: Blood smear from a P. falciparum culture. Several red blood cells have ring stages inside them. Close to the center is a schizont and on the left a trophozoite (Photo courtesy of Wikimedia Commons)
A pair of mutations, which result in deletion of the Plasmodium falciparum histidine-rich protein 2 (HRP2), render the malaria parasite invisible to the most commonly used rapid diagnostic tests.

HRP2 is a histidine- and alanine-rich, water-soluble protein, which is localized in several cell compartments including the parasite cytoplasm. The antigen is expressed only by P. falciparum trophozoites. A substantial amount of the HRP2 is secreted by the parasite into the host bloodstream, and the antigen can be detected in erythrocytes, serum, plasma, cerebrospinal fluid, and even urine as a secreted water-soluble protein.

Results indicated that histidine-rich protein 2-based RDTs would miss approximately 9.7% of P. falciparum malaria cases owing to deletion of the pfhrp2 gene.

“This is a serious problem for malaria control efforts and a reminder that pathogens are very capable of adapting to survive,” said senior author Dr. Jonathan B. Parr, assistant professor of infectious diseases at the University of North Carolina School of Medicine. “Surveillance across the Horn of Africa and alternative malaria diagnostic approaches in affected regions are urgently needed. Our work indicates that prhrp3 deletions have arisen independently multiple times over the course of years. “We also found signs that RDT-based testing and treatment are driving a recent rise in pfhrp2 deletion mutation prevalence, allowing parasites to escape detection.”

The World Health Organization (WHO) now recommends that all malaria endemic countries start and maintain surveillance for pfhrp2/3 deletions and respond appropriately when they are confirmed, in order to prevent unnecessary morbidity and deaths and to safeguard inroads that have been made towards malaria elimination, particularly in sub-Saharan Africa.

The malaria RDT paper was published in the September 27, 2021, online edition of the journal Nature Microbiology.