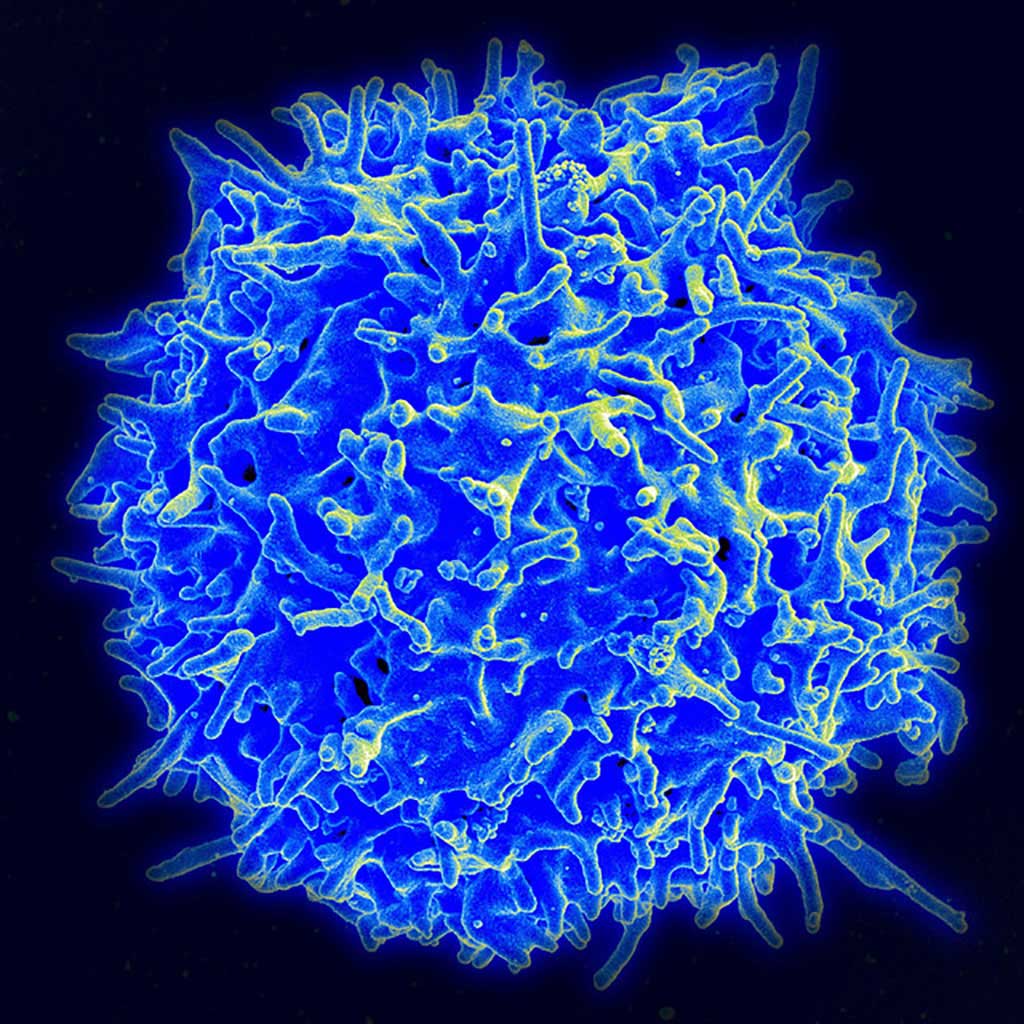 Image: Scanning electron micrograph of a human T-cell from the immune system of a healthy donor (Photo courtesy [U.S.] National Institute of Allergy and Infectious Diseases)
A molecular signature based on an immune cell surface protein is a potential route toward determining a cancer patient’s response to treatment with checkpoint inhibitor drugs.

Immune checkpoint inhibitors are drugs that can aid the immune system of some cancer patients to effectively attack their tumors, but identifying those patients for whom they will be effective is still a challenge.

In this regard, investigators at Memorial Sloan Kettering Cancer Center (New York, NY, USA) designed a study to identify blood-based biomarkers linked to the clinical outcome of immune checkpoint blockade (ICB)-treated patients. For this study, they performed immune profiling of 188 ICB-treated patients with melanoma using multiparametric flow cytometry to characterize immune cells in pretreatment peripheral blood. An independent cohort of 94 ICB-treated patients with urothelial carcinoma was used for validation.

The results revealed three distinct immune phenotypes (immunotypes), defined in part by the presence of a LAG-3+CD8+ T-cell population. LAG-3 (lymphocyte-activation gene 3) is a cell surface protein with diverse biologic effects on T-cell function, including an inhibitory effect on immune responses. It is an immune checkpoint receptor and as such is the target of various drug development programs by pharmaceutical companies seeking to develop new treatments for cancer and autoimmune disorders. In soluble form it is also being developed as a cancer drug in its own right.

Patients with melanoma with a positive LAG immunotype had poorer outcomes after ICB with a median survival of 22.2 months compared to 75.8 months for those with the LAG negative immunotype. An independent cohort of 94 ICB-treated patients with urothelial carcinoma was used for validation where a LAG positive immunotype was significantly associated with response, survival, and progression-free survival.

"If I told you that you could have a simple blood draw and in a couple of days have information to make a decision about what therapy you get, I would say it does not get much better than that," said senior author Dr. Margaret K. Callahan, researcher in medical oncology at Memorial Sloan Kettering Cancer Center. "Of course, there is still much work to be done before these research findings can be applied to patients in the clinic, but we are really enthusiastic about the potential to apply these findings. What I am most excited about is prospectively evaluating the idea that not only can we identify patients who will not do as well with the traditional therapies but that we can also give these patients other treatments that might help them, based on our knowledge of what LAG-3 is doing biologically."

The LAG-3 study was published in the August 25, 2021, online edition of the journal Science Translational Medicine.