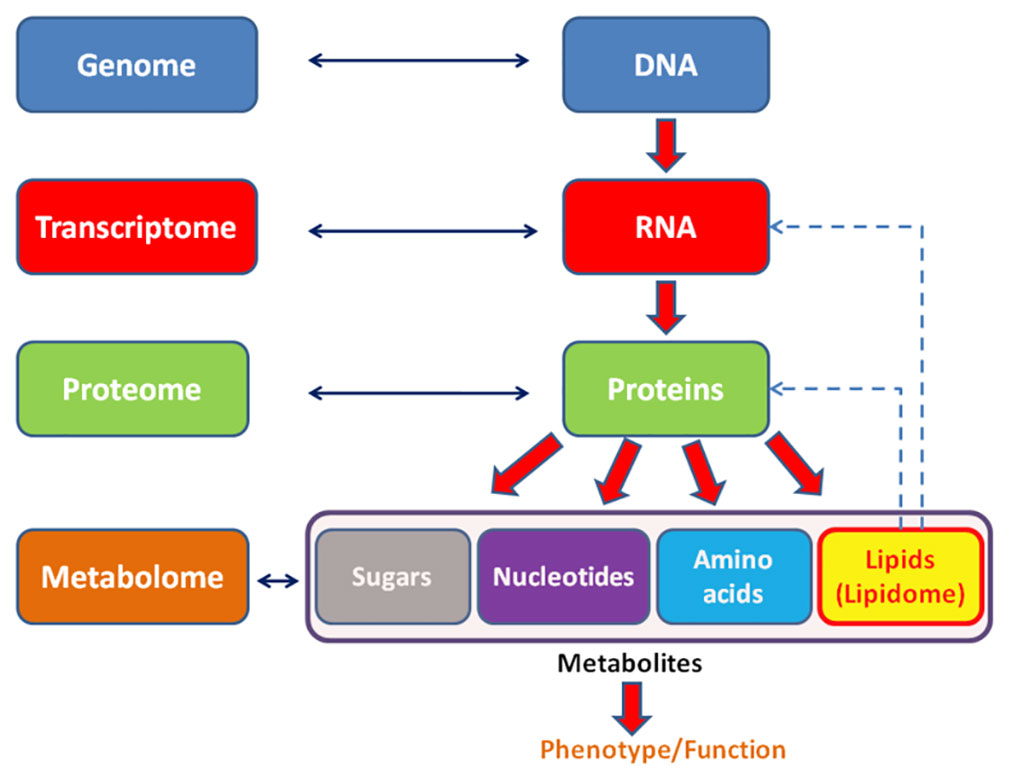 Image: General schema showing the relationships of the genome, transcriptome, proteome, and metabolome (the domain of clinical metabolomics) (Photo courtesy of Wikimedia Commons)
A recent paper demonstrated that an untargeted metabolomics analytical approach could identify many more neonatal disorders caused by inborn errors of metabolism (IEM) than could be found by traditional methods.

The clinical metabolomics approach is capable of detecting multiple metabolites with varying chemical properties in a single test for the global analysis of perturbations in biochemical pathways that would otherwise require multiple targeted tests. Using this approach, small molecules ranging from 75-1000 Daltons were extracted from plasma derived from an EDTA whole blood sample using an 80% methanol solution containing four extraction efficiency standards. The clarified supernatant solution was analyzed by one of two different liquid chromatography–coupled mass spectrometry configurations, depending on the date the sample was received in the laboratory.

For this study, data was generated from 4464 clinical samples received from 1483 unrelated families that had been referred for trio testing of plasma amino acids, plasma acylcarnitine profiling, and urine organic acids and from 2000 consecutive plasma samples from 1807 unrelated families received for clinical metabolomic screening.

"Currently, newborn screening is conducted in every infant born in the U.S. to check for serious but rare health conditions at birth. Screening includes blood, hearing, and heart tests," said senior author Dr. Sarah Elsea, professor of molecular and human genetics at Baylor College of Medicine. "While newborn screening in general has improved in the last 10 years, clinically screening for inborn errors of metabolism has not changed substantially in the last 40 to 50 years."

"We developed a clinical test - untargeted metabolomics profiling - that looks at a broader range of metabolic compounds in the blood, therefore screening for many more disorders than the currently used approach," said Dr. Elsea. "In the current study, we compared the standard approach and untargeted metabolomics on their effectiveness identifying metabolic conditions. We are finding individuals with milder forms of a disease are more common in our populations than those with severe forms. Our approach has been quite successful identifying seizure disorders, movement disorders, and autism spectrum disorders. Our analyses have taught us to open our minds to a much greater spectrum of disease, allowing us to improve early diagnosis."

The clinical metabolomics approach for diagnosis of IEMs was published in the July 12, 2021, online edition of the journal JAMA Network Open.