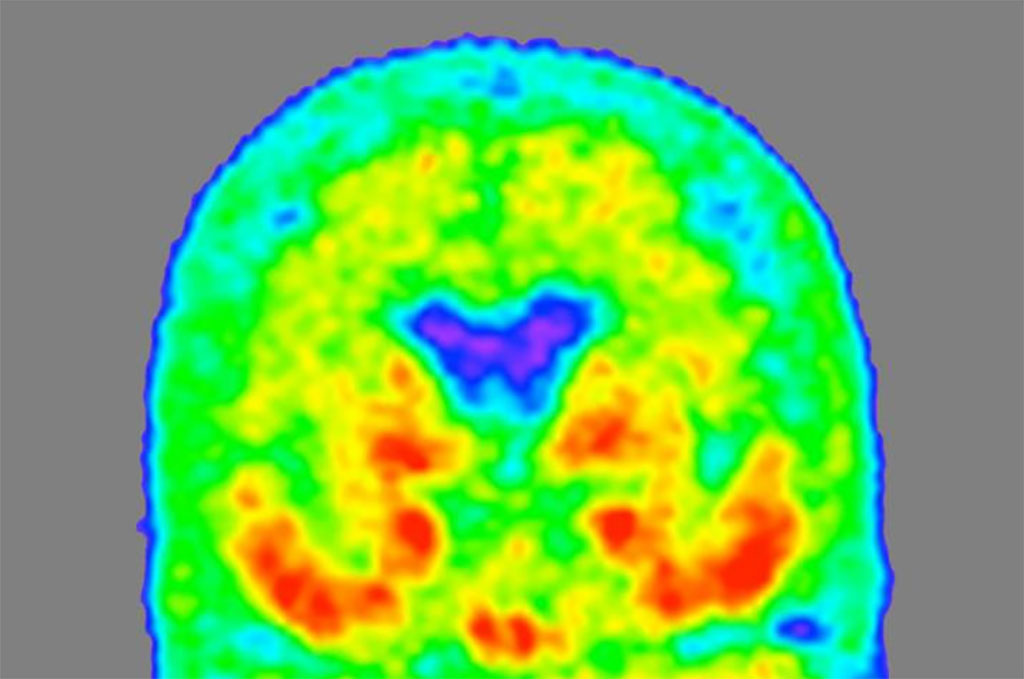 Image: A `heat map` of the brain of a person with mild Alzheimer's dementia shows where tau protein has accumulated, with areas of higher density in red and orange, and lower density in green and blue (Photo courtesy of Tammie Benzinger/Knight ADRC)
A recent paper highlighted the presence and potential utility of MTBR-tau species as biomarkers for diagnosis of Alzheimer’s disease.

Insoluble tau aggregates composed of the microtubule binding region (MTBR) of tau are highly associated with the cognitive and clinical symptoms of Alzheimer’s disease. The tau proteins are a group of six highly soluble protein isoforms produced by alternative splicing from the MAPT (microtubule-associated protein tau) gene. They have roles primarily in maintaining the stability of microtubules in axons and are abundant in the neurons of the central nervous system (CNS). They are less common elsewhere but are also expressed at very low levels in CNS astrocytes and oligodendrocytes.

Pathologies and dementias of the nervous system such as Alzheimer's disease (AD) and Parkinson's disease are associated with tau proteins that have morphed into hyperphosphorylated insoluble aggregates called neurofibrillary tangles. Indeed, novel immunoassays targeting N‐terminal and mid‐region p‐tau181 and p‐tau217 fragments are available. Levels of soluble forms of tau, such as cerebrospinal fluid (CSF) total tau and phosphorylated tau-181 and tau-217, increase prior to tau aggregation in Alzheimer’s disease, but these biomarkers do not reflect the tau-MTBR. Nor do they clarify how CSF MTBR-tau is altered in Alzheimer’s disease.

Investigators at Washington University School of Medicine (St. Louis, MO, USA) examined the role of MTBR-tau by using sequential immunoprecipitation and chemical extraction methods followed by mass spectrometry to analyze MTBR-tau species in samples of Alzheimer’s disease and control CSF. The investigators analyzed CSF from100 individuals in their 70s. Thirty had no cognitive impairment and no signs of Alzheimer's; 58 had amyloid plaques with no cognitive symptoms, or with mild or moderate Alzheimer's dementia; and 12 had cognitive impairment caused by other conditions. Results revealed that tau fragments containing the region beginning at residue 243 were the most highly correlated with tau PET (positron emission tomography) and cognitive measures. Levels of CSF MTBR-tau increased as cognitive impairment and dementia became more advanced.

The MTBR-tau technique was compared to the PET brain scan “gold standard” method. Results indicated that the amount of tau visible in brain scans of 35 people (20 with Alzheimer's and 15 without) correlated highly with the levels of MTBR-tau 243 in their cerebrospinal fluid.

"This MTBR-tau fluid biomarker measures tau that makes up tangles and can confirm the stage of Alzheimer's disease by indicating how much tau pathology is in the brains of Alzheimer's disease patients," said senior author Dr. Randall J. Bateman, professor of Neurology at the Washington University School of Medicine. "If we can translate this into the clinic, we would have a way of knowing whether a person's symptoms are due to tau pathology in Alzheimer's disease and where they are in the disease course, without needing to do a brain scan. As a physician, this information is invaluable in informing patient care, and in the future, to guide treatment decisions."

The study was published in the December 7, 2020, online edition of the journal Brain.