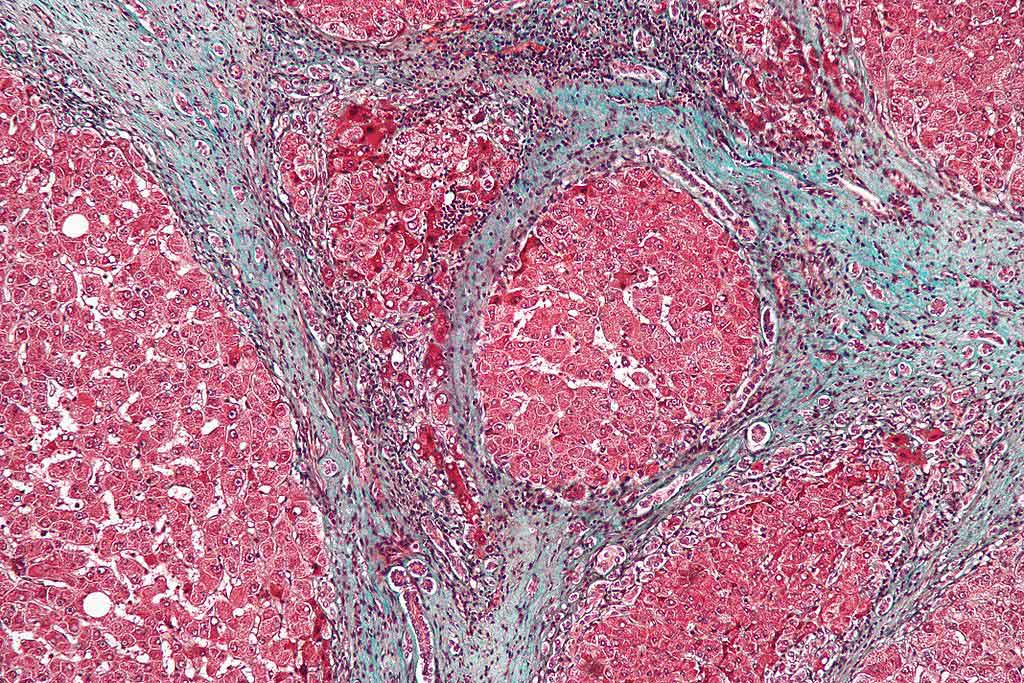 Image: Micrograph showing fibrosis of the liver caused by cirrhosis. The tissue in this example is stained with a trichrome stain, in which fibrosis is colored blue. The red areas are the nodular liver tissue (Photo courtesy of Wikimedia Commons)
A panel of 50 urinary peptides was shown to be a useful tool for the early diagnosis of liver fibrosis.

Liver fibrosis may result from infection by viruses such as hepatitis B and C, excessive alcohol consumption, a build-up of fat in the liver, or some autoimmune diseases. When the liver becomes fibrotic, accumulation of proteins causes the organ to shrink and become stiffer, which impedes its function. Peptide fragments of these proteins enter the bloodstream, where they are channeled into the kidneys and removed from the body via the urine.

Investigators at the University of Warwick (United Kingdom) and their colleagues sought to determine if these excreted peptides could be used to diagnose liver fibrosis in patients with chronic liver disease.

For this study, the investigators recruited 129 patients with varying degrees of liver fibrosis and 223 controls without liver fibrosis. Additionally, 41 patients with no liver, but kidney fibrosis were included to evaluate interference with expressions of kidney fibrosis. Urinary low molecular weight peptides were analyzed by capillary electrophoresis coupled to mass spectrometry.

Results revealed that CE-MS enabled identification of 50 urinary peptides associated with liver fibrosis. The peptides were sequenced and shown to be mainly fragments of collagen chains, uromodulin, and Na/K-transporting ATPase subunit gamma.

Senior author Dr. Ramesh Arasaradnam, associate professor of gastroenterology at the University of Warwick Medical School, said, "Analyzing urine for the purposes of diagnostics is a promising research area, and this new study builds on existing work in my research group looking at urine peptides in colon cancer. While we are unlikely to see this in clinical practice for some time, it provides an avenue for further investigation that could help in the prevention of this terrible condition."

The liver fibrosis study was published in the November 5, 2020, online edition of the journal EbioMedicine.