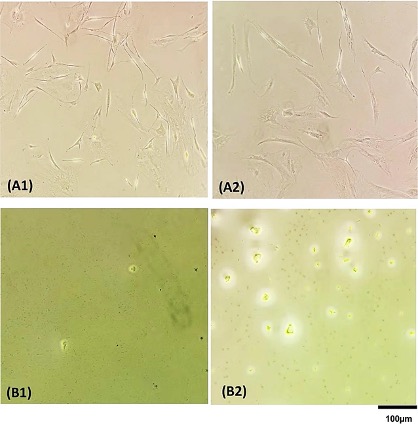 Cells in wells of a 96 well-plate before (A) and after (B) lysis cell by Direct PCR (B1) and Chelex100 (B2) (Photo courtesy of University Hospital Hamburg‐Eppendorf).
Although DNA of high quality can be easily prepared from cultured cells with commercially available kits, many studies involve a large number of samples which increases the cost drastically.

In addition, a limited amount of each sample is often a challenge, for example, for studies using cells of primary cultures for testing multiple drugs at multiple concentrations in multiple replicates, and studies or diagnosis involving defined subpopulations of human immune cells.

Medical scientists at the University Hospital Hamburg‐Eppendorf (Hamburg, Germany) used cells from a primary culture derived from a benign plexiform neurofibroma, a melanoma cell line, and a human fibroblast line. The cells were seeded into wells of 96‐well plates with at different concentrations, each in three replicates. The plates were incubated overnight for the cells to attach the cultural surface and subjected to DNA extraction on the next day after checking the adhesive living cells under a microscope.
After removing the medium, the wells were washed twice with PBS. Subsequently, 70 μL of the Direct PCR lysis reagent (PeqLab, Erlangen, Germany) supplemented with 0.2 mg/mL fresh proteinase K together with 70μL water was added to each well containing adhesive living cells. Supernatants containing the extracted DNA were further purified by precipitation. The team also lysed cells using chelex100 powder (Bio-Rad, Hercules, CA, USA). Conventional polymerase chain reaction (PCR) was carried out using 2 µL out of the 10 µL DNA and a primer pair for an exon of the NF1 gene which is used for the routine genetic diagnosis in their laboratory.

The investigators reported that for 1,000 cells from one primary culture and two tumor cell lines, DNA was reproducible and obtained with recovery rate (obtained/expected amount of DNA) in the range of 50%‐90% as measured by the fluorometer dyes instrument Qubit (Thermo Fisher Scientific, Waltham, MA, USA). For digital PCR, more than 1,600 positive droplets were obtained for DNA from 1,000 cells using the Direct PCR method, corresponding to a yield efficiency of approximately 80%. Further reducing the number of cells down to 100 would be possible with 160 positive droplets expected. Both reagents are inexpensive at EUR 0.08/sample.

The authors concluded that the two methods were efficient; especially the Direct PCR reagent‐based method provides a simple and inexpensive method for preparing DNA suitable for digital PCR from small number of cells. The study was published on August 5, 2020 in the Journal of Clinical Laboratory Analysis.