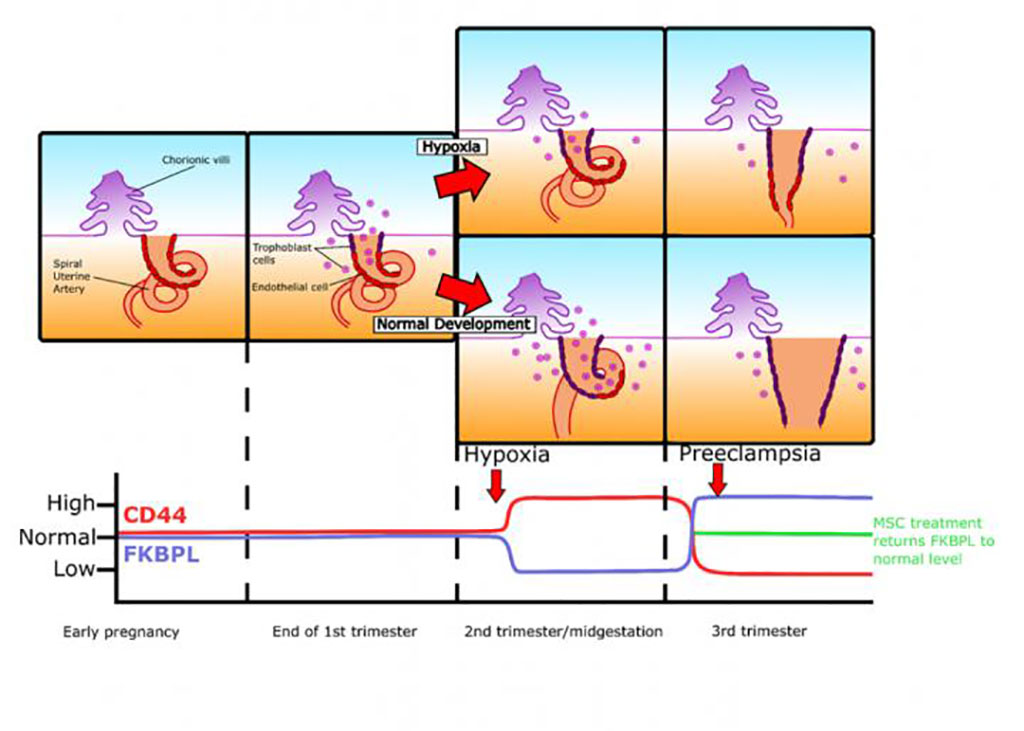 Image: Summary of changes FKBPL and CD44 changes throughout gestation in pregnancies complicated by pre-eclampsia (Photo courtesy of Oxford Press)
A pair of novel protein biomarkers has been identified in the blood of asymptomatic pregnant women that can be used to predict the potential onset of pre-eclampsia.

Development of effective prevention and treatment strategies for pre-eclampsia has been limited by the lack of accurate methods for identification of at-risk pregnancies.

In an effort to correct this lack, investigators at the University of Technology Sydney (Australia) evaluated the diagnostic and therapeutic potential for pre-eclampsia of the angiogenesis protein markers, FKBPL-CD44. FKBPL (FKBP prolyl isomerase like) has similarity to the immunophilin protein family, which play a role in immunoregulation and basic cellular processes involving protein folding and trafficking. CD44 is a cell-surface glycoprotein involved in cell-cell interactions, cell adhesion, and migration. It is a receptor for hyaluronic acid (HA) and can also interact with other ligands, such as osteopontin, collagens, and matrix metalloproteinases (MMPs). This protein participates in a wide variety of cellular functions including lymphocyte activation, recirculation and homing, hematopoiesis, and tumor metastasis.

For the current study, the investigators analyzed 57 samples that were pre-diagnosis (15 and 20 weeks’ gestation) and 18 that were post-diagnosis (14 for plasma; four for placenta) of pre-eclampsia for determination of FKBPL and CD44 concentrations, compared to healthy controls.

"The biomarkers allow the prediction of irregular placenta or maternal vascular function, which are key underlying causes of pre-eclampsia," said Dr. McClements. "This could lead to the early diagnosis and prevention of severe pre-eclampsia and associated complications including death, therefore also giving insight into disease mechanisms and possible treatment targets."

The study was published in the July 3, 2020, online edition of the Journal of Clinical Endocrinology and Metabolism.