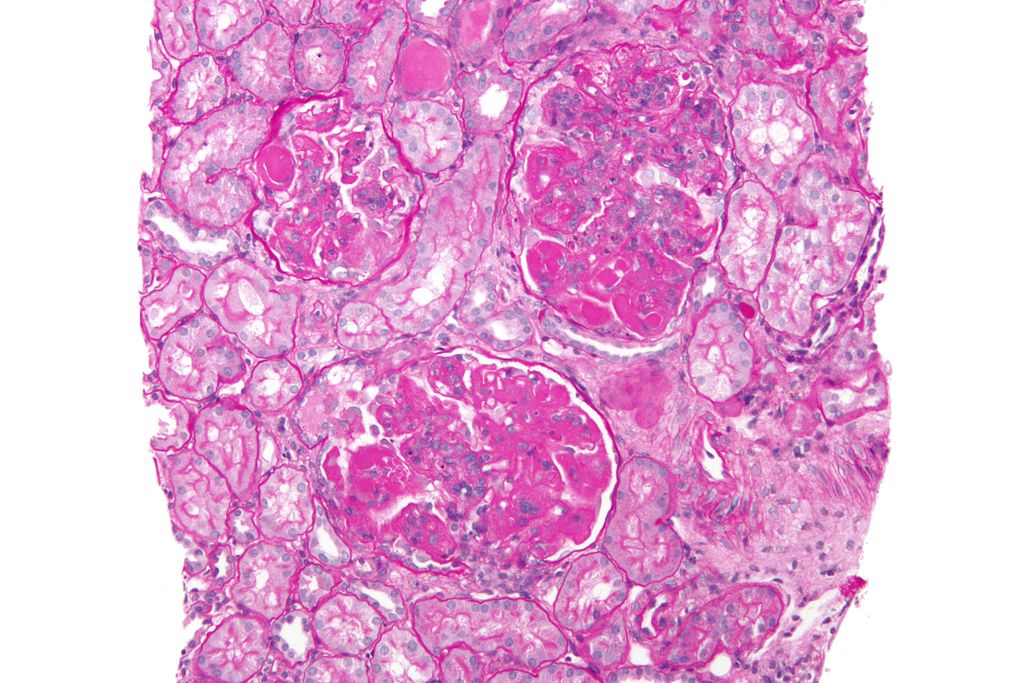 Image: High magnification micrograph of diffuse proliferative lupus nephritis (Photo courtesy of Wikimedia Commons).
A study of biomarkers in the urine of African-Americans, Caucasian, and Asian patients suffering from lupus nephritis identified distinct patterns of proteins associated with each specific ethnicity, which may be useful in diagnosing the disorder.

Lupus nephritis (LN), one of the most severe complications of systemic lupus erythematosus (SLE), is a condition where the kidneys become inflamed and eventually lose function. It is estimated that approximately 60% of all SLE patients will develop LN, and in 10 to 15% of those patients the disease will progress to end-stage renal disease (ESRD). SLE and LN are both heavily influenced by genetics, and African-Americans are three times more likely to develop SLE than Caucasians.

The current gold standard for diagnosis of renal involvement is a renal biopsy. While biopsies are highly informative, they cannot be serially repeated and come with attendant concerns, including the invasive nature of the procedure, and the possibility that the sample taken may not be representative of the entire kidney.

Early detection and prompt treatment are known to have a significant impact on morbidity and mortality in LN, but current diagnostic techniques are not optimal for early detection. Therefore, an easily measurable biomarker for LN with high predictive value is highly desirable, and this has sparked significant research interest in this direction.

A commercially available, pre-fabricated aptamer-based-targeted proteomic assay was used for the study. In this assay, streptavidin-coated beads labeled with 1129 unique aptamers were added to each urine sample to allow them to bind to their designated protein targets. After incubation, the beads were removed from the sample, the proteins attached to the aptamers were biotinylated and all aptamer–protein complexes were cleaved from the initial streptavidin beads and re-coupled to a new bead, with the biotinylated protein attaching to the bead. The aptamers were then removed from the beads and quantitated using a DNA microarray.

"While patient demographics are widely known to affect SLE disease manifestations and outcomes, there are virtually no studies investigating this phenomenon in the context of disease biomarkers," said senior author Dr. Chandra Mohan, professor of biomedical engineering at the University of Houston. "Most SLE biomarker studies focus on one demographic group or all ethnic groups combined, which yield results that may not be equally predictive in all demographic groups of SLE patients. Among African American patients, the most discriminatory biomarkers that distinguished active LN from inactive disease were urine ALCAM, PF-4, properdin, and VCAM-1. The best biomarkers lend themselves to be the best therapeutic targets because they tend to be disease drivers, and that is what is happening here with ALCAM."

The lupus nephritis study was published in the May 4, 2020, online edition of the journal Nature Communications.