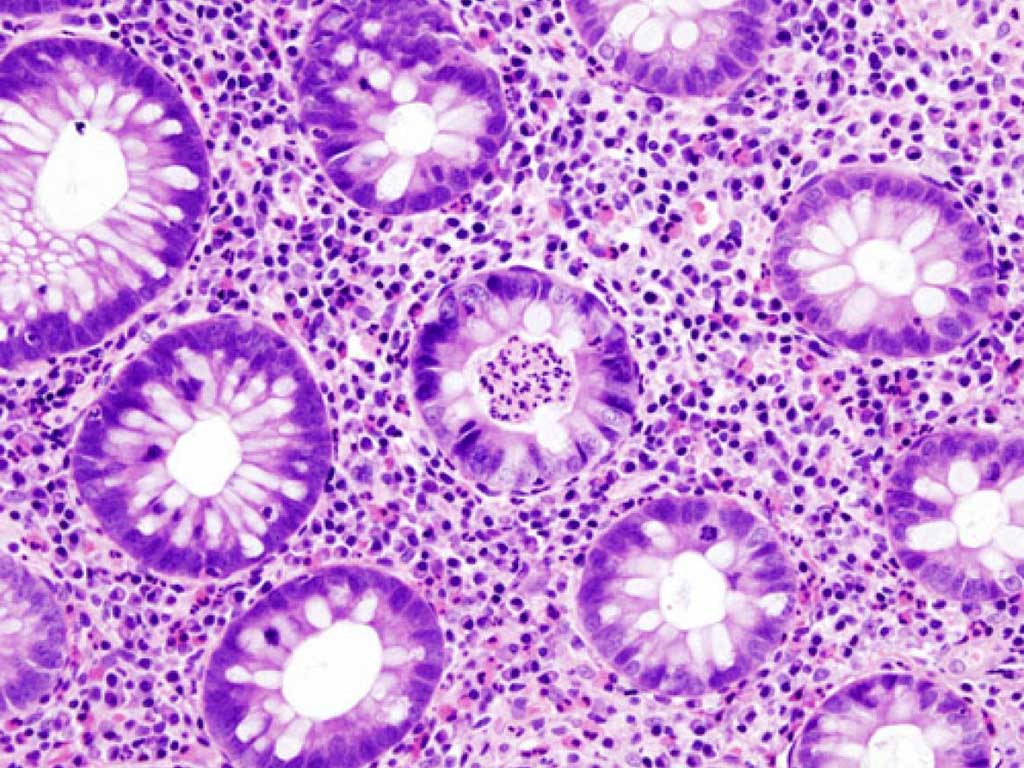 Image: Histological photomicrograph of a colonic biopsy showing a crypt abscess, a classic finding in ulcerative colitis (Photo courtesy of KGH).
The two main forms of Inflammatory Bowel Disease (IBD), Crohn's disease and ulcerative colitis, have an important genetic component. More than 240 genetic regions have been identified that associate with IBD, more than any other pathological condition that has been studied.

The exact cause of IBD is unknown, but IBD is the result of a defective immune system. A properly functioning immune system attacks foreign organisms, such as viruses and bacteria, to protect the body. In IBD, the immune system responds incorrectly to environmental triggers, which causes inflammation of the gastrointestinal tract.

Scientists at the Children's Hospital of Philadelphia (Philadelphia, PA, USA) and their colleagues used a variety of assays and state-of-the-art sequencing methods. The study team sought to characterize the single nucleotide polymorphism (SNP) rs1887428, which is located on the promoter region of the Janus kinase 2 (JAK2) gene. The protein coded by this gene is responsible for controlling the production of blood cells. Mutations of JAK2 have been linked to various blood cancers.

The team identified proteins known as transcription factors, which regulate gene expression, that were associated with this particular single nucleotide polymorphism (SNP). Two transcription factors in particular, RBPJ and CUX1, can recognize the DNA sequence altered by the rs1887428 SNP. Additionally, they found that while the SNP only has a very modest influence on JAK2 expression, the effect was amplified by other proteins in the JAK2 pathway.

Hakon Hakonarson, MD, PhD, a Professor of Pediatrics and senior author of the study, said, “Using this method, we believe we have added an important tool to our arsenal of SNP-to-gene assignment methods, allowing us to pinpoint disease-driving genetic mutations that have previously been difficult to properly assign risk. This study in particular also provides evidence that drugs targeting JAK2 may provide some benefit for those patients suffering from IBD who carry mutations that upregulate the JAK2 pathway, though such precision-based approaches would need to be validated in clinical studies.”

The authors concluded that despite the absence of a consensus transcription factor-binding motif or expression quantitative trait locus, they have used improved methods to characterize a putatively causal SNP to yield insight into inflammatory bowel disease mechanisms. The study was published on April 9, 2020 in the Journal of Crohn's and Colitis.