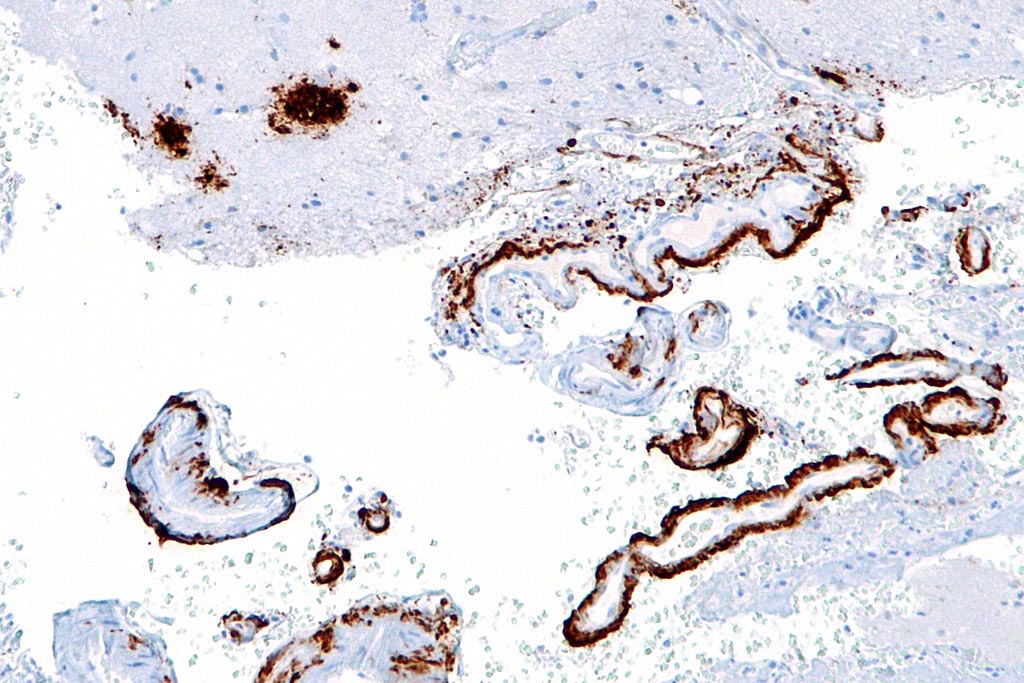 Image: A micrograph showing amyloid-beta (brown) in senile plaques of the cerebral cortex (upper left of image) and cerebral blood vessels (right of image) with immunostaining (Photo courtesy of Wikimedia Commons).
Measurement of misfolded Abeta (amyloid-beta) protein in blood plasma was shown to be a strong, specific risk prediction marker for clinical Alzheimer’s disease even many years before clinical diagnosis.

Since Alzheimer's disease (AD) has a long silent phase between the onset of the molecular defects that cause the disease and the appearance of diagnostically specific symptoms, identifying high-risk individuals is critical. In this regard, investigators at the German Cancer Research Center (Heidelberg, Germany) appraised the ability of Abeta misfolding in blood plasma, APOE4 status, and dementia risk factors to predict diagnosis of AD.

For this study, the investigators evaluated the initial blood samples of 150 ESTHER participants in whom dementia was subsequently diagnosed during the 14-year follow-up period. ESTHER was an epidemiologic study assessing chances of prevention and early detection of various chronic diseases including cancer among older adults.The samples were compared with those of 620 randomly selected control participants not known to have been diagnosed with dementia who correlated with the dementia participants in terms of age, sex, and level of education. In particular, associations between Abeta misfolding, APOE4, and other predictors with clinical AD, vascular dementia, and mixed dementia diagnoses were assessed.

Changes in Abeta concentration were determined using an immuno-infrared sensor, which measured the ratio of misfolded to normally folded Abeta. Misfolded proteins tended to aggregate in amyloid plaques, while healthy structures did not. The two structures absorbed infrared light at different frequencies, which enabled determination of the ratio of healthy to pathological Abeta in blood plasma samples.

Results revealed that Abeta misfolding was associated with 23-fold increased odds of clinical AD diagnosis within 14 years. With the exception of the APOE4 status, which showed a 2.4 times higher risk in those people who later went on to develop Alzheimer's disease, none of the factors related to pre-existing diseases (diabetes, high blood pressure, depression) or lifestyle factors (bodyweight, level of education) correlated with the risk of disease.

"Everyone is now pinning their hopes on using new treatment approaches during this symptom-free early stage of disease to take preventive steps. In order to conduct studies to test these approaches, we need to identify people who have a particularly high risk of developing Alzheimer's disease," said senior author Dr. Hermann Brenner, professor of clinical epidemiology and aging research at the German Cancer Research Center.

The Abeta study was published in the October 11, 2019, online edition of the journal Alzheimer's & Dementia.