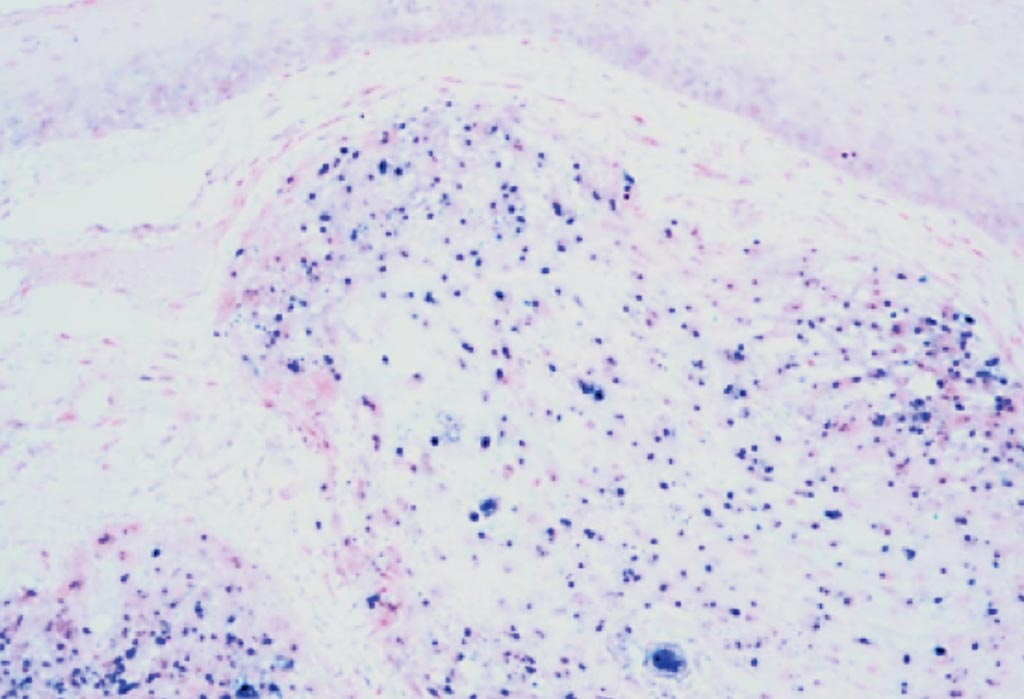 Image: A photomicrograph of human papilloma virus associated oropharyngeal cancer. The tissue has been stained to show the presence of the virus by in situ hybridization (Photo courtesy of Jennifer L. Hunt, MD).
Head and neck cancers affect some 53,000 people in the USA each year, according to the National Cancer Institute, and human papilloma virus (HPV) has been implicated in many of those cases. The diagnosis of cancer can be confirmed by tissue biopsy.

In general, patients with HPV-positive tumors have higher survival rates than those with HPV-negative tumors. Persistent traces of human papilloma virus DNA after treatment for HPV-positive head and neck cancer are linked to an increased recurrence risk.

The investigators reported that at diagnosis, patients with HPV-positive tumors were significantly more likely to have oral rinse samples positive for HPV than were patients with HPV-negative tumors. In particular, the scientists reported that the detection of any oral HPV DNA had a sensitivity of 84%, a specificity of 88%, a positive predictive value of 88%, and a negative predictive value of 84% for the diagnosis of an HPV-positive tumor. The prevalence of oral HPV DNA, though, went down after treatment. Prior to treatment, the prevalence of HPV DNA in oral rinses that matched that of HPV in the tumor sample was 69%. But after primary surgical resection, it was about 14%. Its prevalence fell similarly for patients who underwent radiotherapy, going from 85% before treatment to 9% after radiotherapy.

The authors concluded that the prevalence and viral load of tumor-type HPV DNA decreased rapidly with therapy, and persistent detection was associated with increased risk of recurrence and death. Analysis of tumor type HPV DNA has considerable promise as a biomarker for treatment response and risk of progression. The study was published on May 2, 2019, in the journal JAMA Oncology.