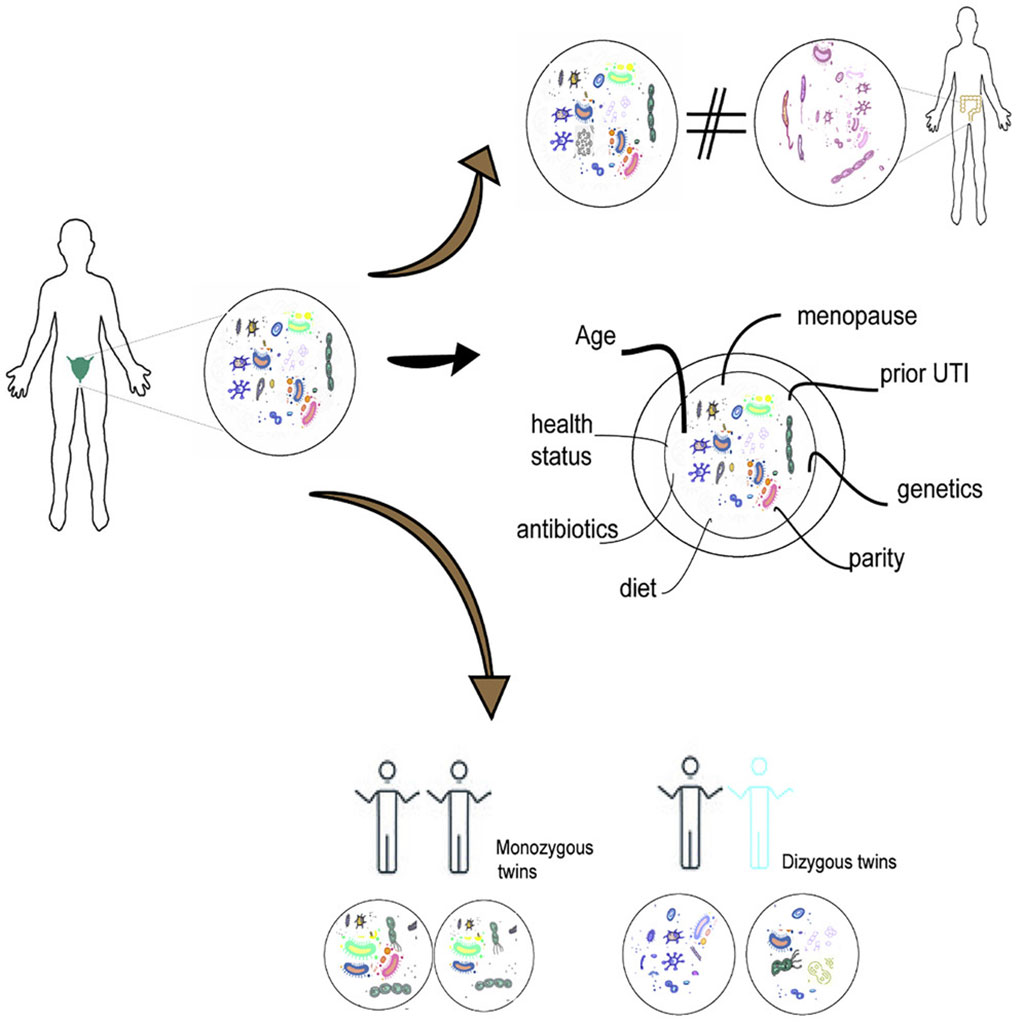 Graphic representation of how the urinary tract microbiome in older women exhibits host genetic and environmental influences (Photo courtesy of King\'s College London).
The urinary microbiome is a relatively unexplored niche that varies with gender. Urinary microbes, especially in aging populations, are associated with morbidity. Both genetic and environmental factors influence the makeup of the urinary tract microbiome of older women.

The term “urine microbiome” is being proposed as a term denouncing the old paradigm, that urine in the bladder is usually sterile. The bacterial species include lactobacilli, obligate anaerobes, Gardnerella vaginalis, non-hemolytic streptococci, Mycoplasma and Ureaplasma amongst others.

The investigators performed 16S rRNA sequencing of midstream urine samples from the mostly post-menopausal women from the TwinsUK cohort. When they compared the composition of these samples to the previously published microbiomes of other body sites, they found the diversity of the urine dataset to be similar to that of the vaginal dataset, but that it was not as diverse as the stool dataset. Within the urinary tract microbiome, they identified a set of 61 core microbial taxa. As compared to the gut microbiome dataset, the urinary tract microbiome included more Actinobacteria, Fusobacteria, and Proteobacteria, but fewer Bacteroidetes, Firmicutes, and Verrumicrobia. For a subset of participants, they also generated shotgun metagenomic data in addition to the 16S data. The core microbiome they identified through the 16S data was largely recapitulated in the metagenomic dataset.

By using three different measurements, heritability, family segregation, and ancestry-based analyses, they found a significant effect of host genetics on the composition of the urine microbiome. In particular, for the core microbiome, they found that nearly a quarter of those variants that were found in at least 5% of participants had heritability estimates larger than 10%. One of these, Escherichia-Shigella, has been implicated in urinary tract infections and suggests host genetics may contribute to such infections.

The authors concluded that the urinary microbiome was distinct and apparently unrelated to stool microbiome. It shows a significant contribution of host genetics. Key species known to be clinically relevant were among the most heritable microbes. The study was published on July 21, 2020 in the journal Cell Host & Microbe.