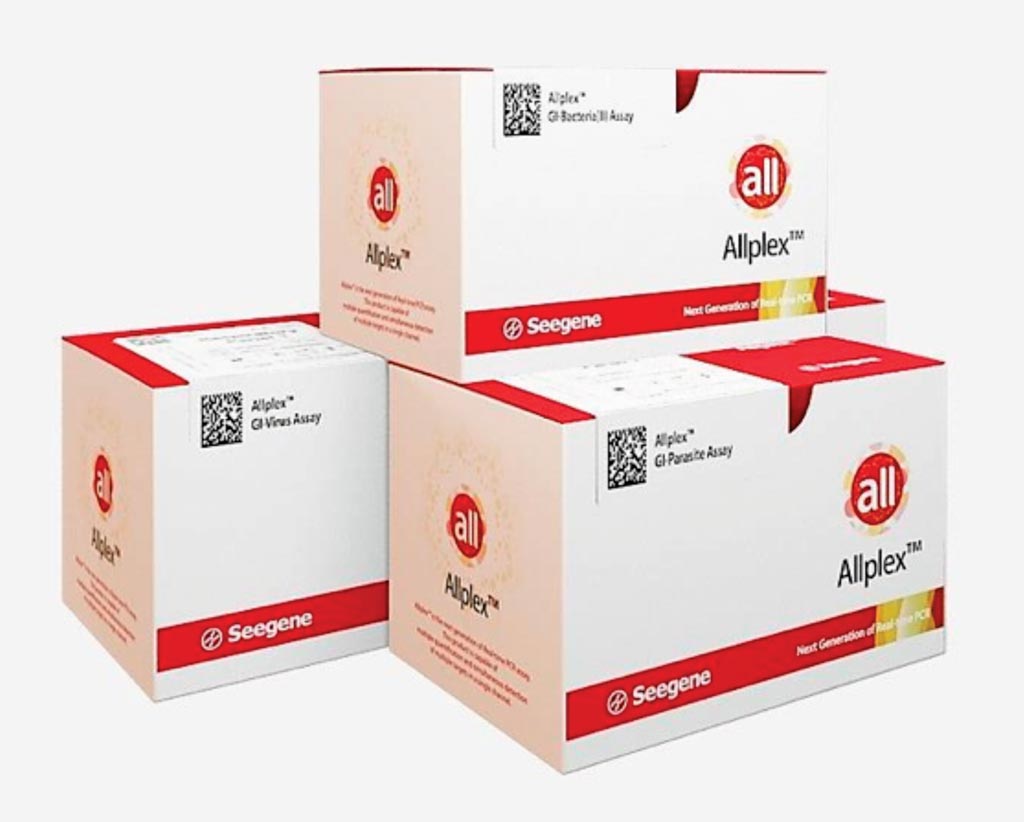 Image: Allplex gastrointestinal full-panel assays for the detection and identification of 25 gastrointestinal pathogens (six viruses, 13 bacteria and six parasites) using One-step RT Real-time PCR (Photo courtesy of Seegene).
Infectious gastroenteritis is caused by infection with bacteria, viruses, or parasites. It is a major public health problem, being a leading cause of morbidity and mortality worldwide. Despite public health efforts in food safety education and water treatment systems, pathogen-induced acute diarrheal disease is still a significant cause of morbidity and mortality globally.

Medical Laboratory Scientists at The Catholic University of Korea (Seoul, Korea) collected a total of 858 stool samples submitted to the department of laboratory medicine in the hospital between January and October 2016. Each sample was submitted for one of four different microbiological tests: 197 samples (23%) for in-house multiplex polymerase chain reaction (PCR) assays for diarrheagenic Escherichia coli and Salmonella spp.; 182 samples (21%) for routine bacterial culture, 175 samples (20%) for toxigenic Clostridium difficile culture and Xpert C difficile/Epi, and 304 samples (36%) for norovirus and rotavirus antigen test. All three assays allowed the use of raw stool samples.

Other methods used in the study included the Allplex Gastrointestinal Full Panel Assay with 24 targets: 13 bacteria, five viruses, and six parasites in four panels; the xTAG Gastrointestinal Pathogen Panel with 15 targets: nine bacteria, three viruses, and three parasites; and the BD MAX Enteric panel with five bacteria and three parasites. Other tests were used for confirmation.

The authors concluded that the three multiplex molecular assays showed substantial to almost perfect agreement, and they allowed additional identification of GI pathogens. These multiplex molecular assays appear to be a promising tool for the simultaneous detection of multiple GI pathogens. To decide which of these assays to use as a routine diagnostic procedure, various factors, such as range of pathogens detected, cost, throughput, hands-on time, and required technical skills, should be considered. The study was published in the August 2019 issue of the journal Archives of Pathology & Laboratory Medicine.

The Catholic University of Korea