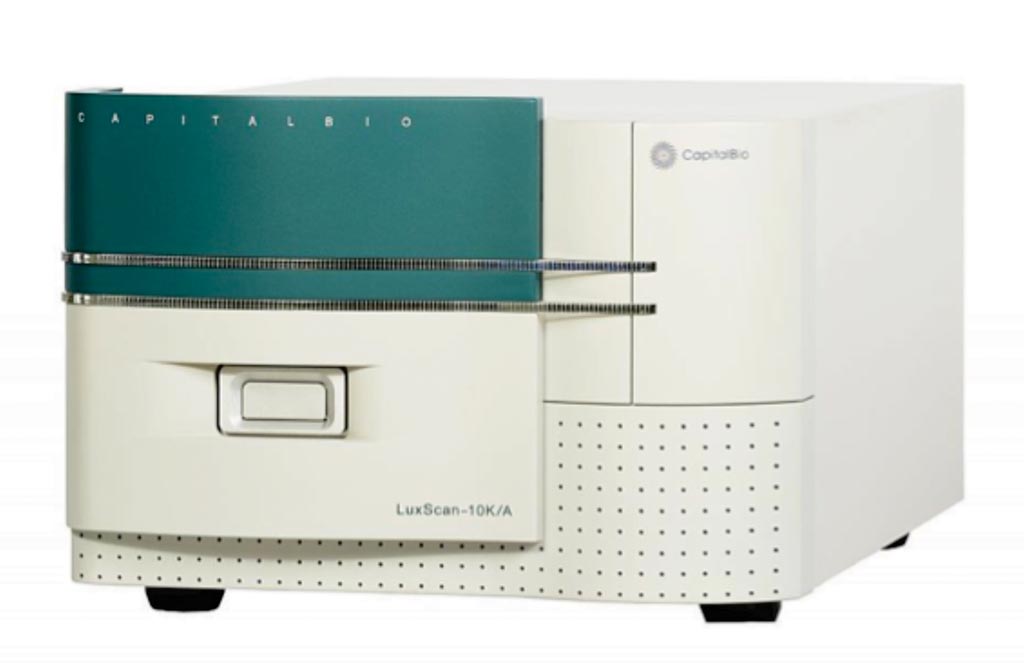 Image: The LuxScan 10K-B confocal laser scanner for microarray imaging and data analysis of DNA, protein, cell and tissue arrays (Photo courtesy of Capital Bio).
Tuberculosis (TB) has bounced back in the past several decades and has become the main cause of death from one single infectious disease, mainly due to the epidemic of human immunodeficiency virus (HIV).

The incidence and prevalence of nontuberculous mycobacteria (NTM) are increasing worldwide, especially NTM lung diseases (NTMPD) in both immunocompetent and immunodeficient patients. In some developed countries, NTM are even more prevalent than tuberculosis. A rapid and accurate method is warranted for the distinction of TB and NTM and the discrimination of NTM species.

Infectious disease scientists at Zhejiang University Medical School (Zhejiang, China) obtained a total of 1,751 sputum specimens from seven cities in Zhejiang Province, China. All of the specimens were collected from patients who were under suspicion of Mycobacterium tuberculosis or NTM according to clinical manifestations or imaging investigations. Acid fast bacilli (AFB) smear-positive sputum samples were confirmed by the Ziehl-Neelsen method and were collected consecutively from each hospital between January 2016, and June 2018. After processing suspensions were inoculated into 7H9 broth for culturing and further species identification.

The nucleic acid was extracted subjected to asymmetric polymerase chain reaction (PCR) before hybridization. Chip hybridization was performed in a three-dimensional tilting agitator BioMixer II hybridization oven and an automated SlideWasher from Capital Bio. Microarrays on the slides were analyzed using a LuxScan 10K-B confocal laser scanner; the fluorescent intensities were quantified by use of dedicated software called the mycobacteria identification array test system from Capital Bio.

The investigators reported that in the 1,751 sputum specimens, 1,685 samples were cultured successfully; among these samples, 1,361 were Mycobacterium tuberculosis, 323 were NTM and one was Nocadia farcinica. Of the 323 NTM, most of them were Mycobacterium intracellulare (52.5%) followed by Mycobacterium abscessus (20.7%), Mycobacterium avium (11.7%), Mycobacterium kansasii (9.6%) and Mycobacterium fortuitum (1.9%). The sensitivity, specificity, positive predictive value (PPV) and negative predictive value (NPV) of the biochip assay to differentiate TB and NTM from AFB positive specimens were 99.8%, 99.7%, 99.9%, 99.1%, 98.8%, 1, 1, and 99.7%, respectively. The concordance between the biochip assay and mycobacterial culture for the identification of NTM species was 95.4%.

The authors concluded that the biochip assay is a reliable tool for the rapid identification of most mycobacteria in clinical sputum specimens. This assay can be helpful for physicians in the early diagnosis and treatment of mycobacterium infections. The study was published in the April 2019 issue of the International Journal of Infectious Diseases.