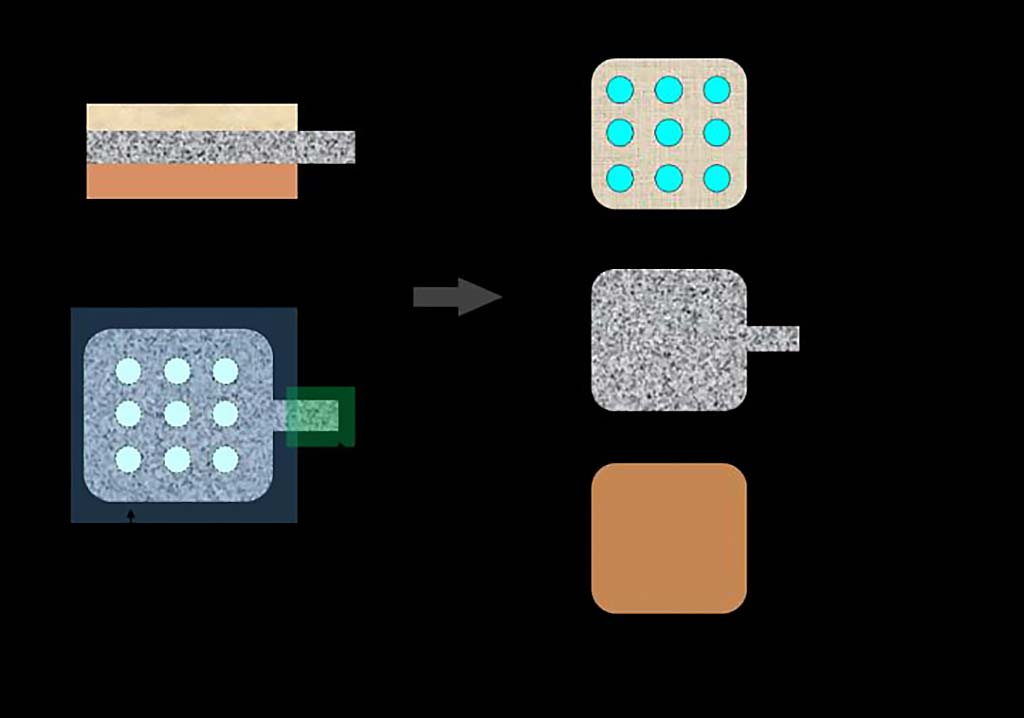 Image: Schematic of the laser fabricated three-layer paper device for bacteria (Photo courtesy of University of Southampton)
A novel paper-based point-of-care device that combines detection of pathogenic bacteria with determination of antibiotic susceptibility is expected to reduce the number of unnecessary antibiotic prescriptions and aid in the on-going struggle to prevent development of antibiotic resistance.

Antimicrobial resistance (AMR) has been identified by the World Health Organization as a global threat that currently claims at least 25,000 deaths each year in Europe and 700,000 world-wide. The number of fatalities attributed to AMR is projected to reach 10 million per year between 2015 and 2050. Therefore, there is an urgent need for low-cost but reliable point-of-care diagnostics for early screening of infections especially in developing countries lacking in health care infrastructure and trained personnel.

To this end, investigators at the University of Southampton (United Kingdom) developed a laser-patterned paper-based device for detection and susceptibility testing of Escherichia coli, the main cause of urinary tract infections, via a simple visually observable color change.

The test device comprises three layers - a top paper layer containing four common antibiotics in confined rectangular areas, an absorbent paper in the middle, and an agar gel-containing base layer, all sealed in a plastic casing.

A test is performed by adding a liquid sample (such as urine) to a small paper tab, which is then covered with tape to prevent drying out or contamination. The sample diffuses across the middle paper layer and through the four rectangles containing the test antibiotics (amoxicillin, ciprofloxacin, gentamicin and nitrofurantoin). If bacteria are present in the sample, their growth will cause the paper to turn blue. If the bacteria are susceptible to one (or more) of the antibiotics, a clear patch caused by growth inhibition will be seen around the corresponding rectangle.

"By enabling doctors to quickly determine if an infection is caused by bacteria, and if the bacteria are resistant to four common antibiotics, this device could cut down on unnecessary antibiotic prescriptions and help fight the growing threat of antibiotic resistance," said senior author Dr. Collin Sones, associate professor of optoelectronics research at the University of Southampton.

The device for simultaneous detection and antibiotic-resistance testing of bacterial infections was described in the March 15, 2020, online edition of the journal Biosensors and Bioelectronics.