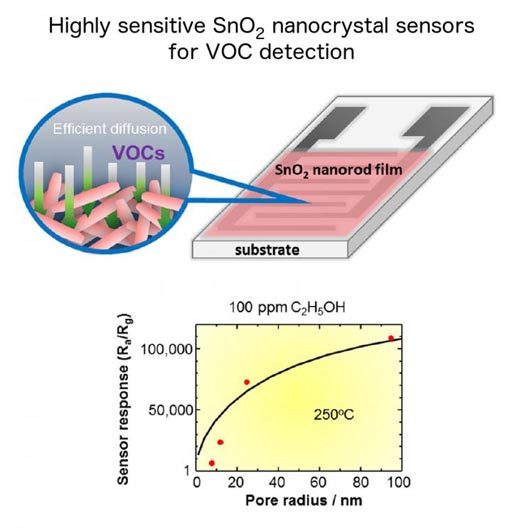 Some VOCs are harmful to animal or environmental health so sensing these gasses is important for maintaining health and safety. VOCs can also be useful in medical diagnostics, which require highly sensitive sensors to be effective.

In an effort to improve VOC detection, researchers, from Kumamoto University in collaboration with researchers from Fukuoka Industrial Technology Center and Tohoku University, set out to improve sensor sensitivity by modifying the particle and pore sizes of Tin-dioxide (SnO2) nanocrystals on sensing film. They knew that particle size was a determining factor in sensor response, so they formulated a method to synthesize SnO2 particles of different sizes and pore distribution patterns, and ran an analysis to determine optimal sensor film particle morphology for various gasses.

Using a hydrothermal method, the researchers synthesized SnO2 nanocubes and nanorods, and created gas-sensing films of various pore and particle sizes. Nanocrystals created in this experiment were developed using organic molecules in an acidic solution, which is a major difference from previous experiments that used cations in an alkaline solution. Films made from nanocubes had very small pores, less than 10 nm, whereas films made with nanorods were distinctly porous with pore sizes larger than 10 nm. Palladium (Pd)-loaded SnO2 nanocrystals were also synthesized to test the idea that Pd-loading would improve sensor response by changing pore sizes.

The gasses used to test the new sensors were hydrogen (200 ppm), ethanol (100 ppm), and acetone (100 ppm), each of which are known biomarkers for glucose malabsorption, alcohol intoxication, and diabetic ketoacidosis, respectively. Sensor response (S) was calculated using a ratio of electrical resistance produced in air (Ra) to the resistance produced by the testing gas (Rg) (S=Ra/Rg).

"Our experiments show that nanocrystal sensors with larger pore sizes gave the best sensor responses. In particular, we found ultra-high sensitivity (increasing by 5 orders of magnitude) in the devices with largest pore size, the long nanorod sensors," said Professor Tetsuya Kida, Kumamoto University, "This tells us that is beneficial to have precise control over the manufacturing methods of these types of sensors."

Simulations have estimated ethanol detection levels to be in the lower parts-per-billion range, meaning that the devices could feasibly detect alcohol biomarkers in a patient's breath.

One drawback of the new sensors is their relatively long recovery time. Even though the response time was swift, between 15-21 seconds, the recovery time fell between 157-230 minutes. This was thought to be caused by reaction byproducts remaining on the surface of the sensor film. Additionally, experimental and simulation results for ethanol showed that sensors with pore sizes over 80 nm are prone to saturate. However, it is likely that this can be overcome by pore size optimization and controlling the sensor film electrical resistance.