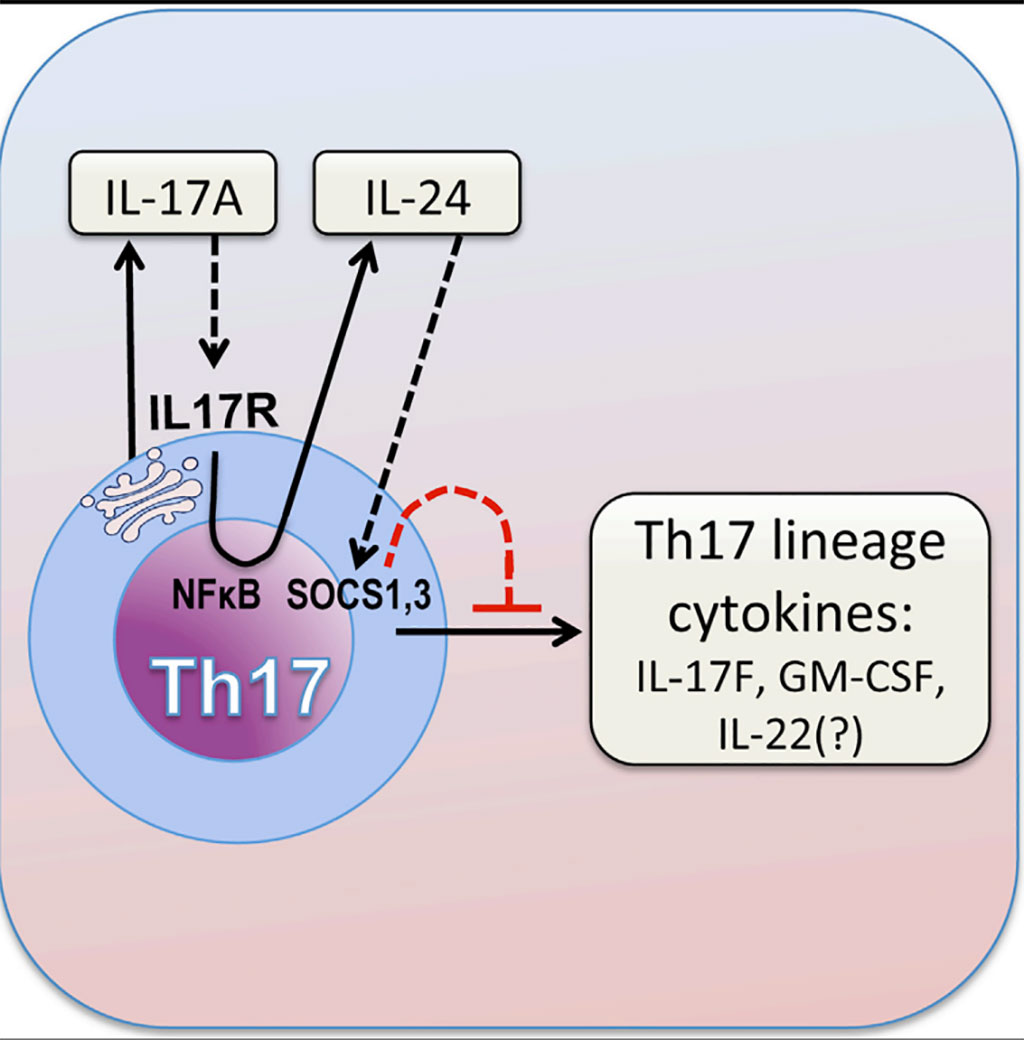 Image: Graphic diagram of how the cytokine IL-17A limits Th17 pathogenicity via a negative feedback loop driven by autocrine induction of IL-24 (Photo courtesy of the US National Eye Institute).
Autoimmune uveitis (AU) is an inflammatory process of the uveal components of the eye, due to an autoimmune reaction to self-antigens or caused by an innate inflammatory reaction secondary to an external stimulus. It can present as an isolated entity or associated with a systemic autoimmune or autoinflammatory disease.

In autoimmune uveitis, immune cells become abnormally activated and begin to destroy healthy cells, including light-sensing photoreceptors and neurons. A key immune cell involved in this response is the Th17 lymphocyte, which produces several pro-inflammatory molecules known as cytokines. A hallmark of Th17 cells is the ability to produce interleukin-17A (IL-17A), which attracts immune cells called neutrophils that can damage tissue.

The team were able to selectively remove IL-17A from Th17 cells and examine the cells' behavior in models of both uveitis and multiple sclerosis (MS). Intriguingly, they found that these cells produce more IL-17F, granulocyte-macrophage colony-stimulating factor (GM-CSF), and possibly other inflammatory molecules. They concluded that these additional inflammatory cytokines compensate for the loss of IL-17A in driving inflammation. They found that when IL-17A binds to its receptor on Th17 cells, this triggers a signaling cascade that turns up the cells' production of an anti-inflammatory molecule, interleukin-24 (IL-24), which was not previously known to be produced by Th17 cells. IL-24 in turn suppresses the rest of the Th17 cells' inflammatory program, turning down the production of cytokines like IL-17F, GM-CSF and possibly IL-22. Thus, without IL-17A, this autocrine loop does not happen, causing the Th17 cells to overproduce the other inflammatory cytokines and thereby increase inflammation.

Rachel Caspi, PhD, chief of the Laboratory of Immunology and senior author of the study, said, “There are some diseases, like psoriasis, where anti-IL-17A therapy has been spectacularly successful. We expected that this would also apply to uveitis, but it turned out not to be the case. This study might explain why clinical trials targeting IL-17A to treat uveitis were not successful, and suggests that a combination approach involving both IL-17A and IL-24 may be more effective in treating autoimmune disorders of the nervous system.”