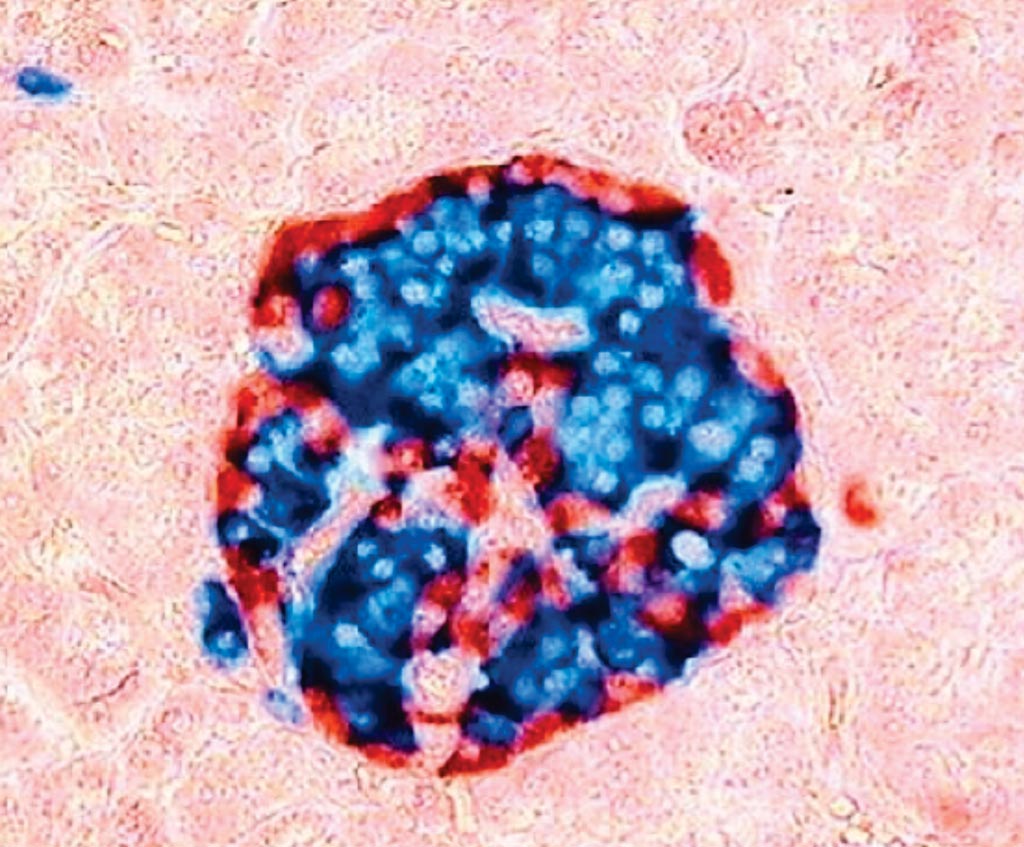 Image: Human pancreatic islet stained with glucagon antibody (red) and insulin antibody (blue). Glucagon is produced by alpha cells, while beta cells produce insulin (Photo courtesy of University of Turku).
The appearance of Type 1 diabetes (T1D)-associated autoantibodies is the first and only measurable parameter to predict progression toward T1D in genetically susceptible individuals.

A team of scientists working with the University of Turku (Turku, Finland) used mRNA-sequencing-based analysis of 306 samples including fractionated samples of CD4+ and CD8+ T cells as well as CD4-CD8- cells fractions and unfractionated peripheral blood mononuclear cell (PBMC) samples longitudinally collected from seven children that developed beta-cell autoimmunity (Cases) at a young age and their matched controls.

The investigators identified transcripts, including interleukin-32 (IL32) that were upregulated before T1D-associated autoantibodies appeared. Single-cell RNA-seq studies revealed that high IL32 in Case samples were contributed mainly by activated T cells and NK cells. Further, they showed that IL32 expression can be induced by a virus and cytokines in pancreatic islets and beta-cells, respectively.

The authors concluded that their results provide a basis for early detection of aberrations in the immune system function before T1D and suggest a potential role for IL32 in the pathogenesis of T1D. Riitta Lahesmaa, MD, a Professor of Biotechnology and senior author of the study, said, “Our results provide a starting point for identifying those children who are likely to develop type 1 diabetes later. Next, we will validate and expand the study in a larger cohort and analyze the role of the signature molecules in the pathogenesis of type 1 diabetes. Our goal is to develop tools and means that would enable the prevention of type 1 diabetes.” The study was published in the July 2019 issue of the journal Diabetes.