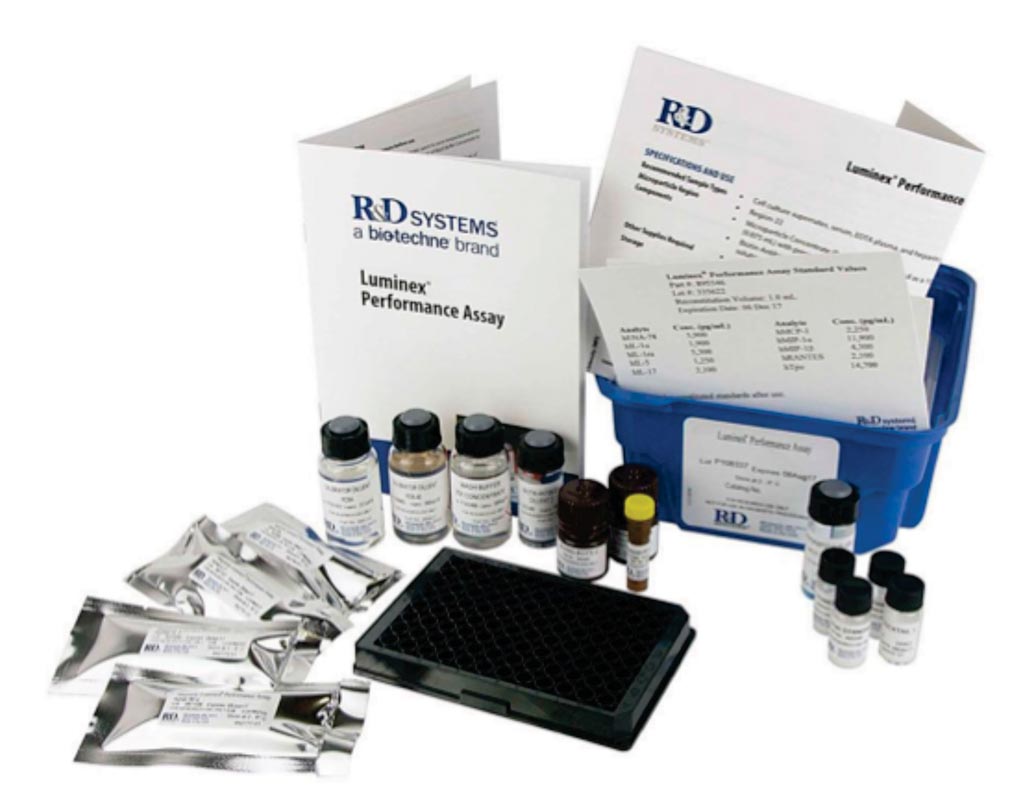 Image: Human IL-6 Luminex Performance ELISA Assay (Photo courtesy of R&D Systems).
Proteomics has facilitated discovery of biomarkers to better understand the pathophysiology of early-onset neonatal sepsis with the goal of identifying as early as possible the newborns more likely to die or develop significant morbidity.

Some preterm babies born without haptoglobin (Hp), a protein in blood cells, have higher odds of brain bleeding, cerebral palsy and death. This finding suggests that the absence of the protein could serve as a potential biomarker indicating a need for increased monitoring or other preventive interventions.

The team measured cord blood Hp and interleukin-6 (IL-6) concentrations in all samples. IL-6 was measured with commercial ELISA assays of low and high sensitivity. A cut-off in cord blood Hp immunoreactivity of 3,370 ng/mL in an enzyme-linked immunosorbent assay (ELISA) assay had ~ 100% sensitivity and specificity to segregate samples with switch-off from those with switch-on pattern on Western blots. Because the limit of detection for clinical assays to detect anhaptoglobinemia in adults is 2 mg/dL, Western blots were performed on all cord blood samples measuring Hp ≥ 2,000 ng/mL by ELISA (n = 507). Analysis of the magnesium concentration in cord serum was performed with a minimum detectable magnesium concentration of 0.4 mEq/L.

The authors concluded that fetal ability to switch-on Hp expression in response to inflammation was associated with reduction of IVH and/or death, and CP and/or death. Fetuses unable to mount such a response had an increased risk of adverse outcomes. Catalin S. Buhimschi MD, a professor of obstetrics and gynecology the lead author of the study said, “Our study provides strong evidence that an absence of haptoglobin in preterm babies who have been exposed to inflammation is an indicator of increased risk for complications like brain bleeding, cerebral palsy and even death. This underscores the potential protective role of haptoglobin against short- and long-term poor neonatal outcomes and suggests that the protein may be a valuable marker of neurologic damage and the need for clinical interventions.” The study was published on March 22, 2019, in the journal EClinicalMedicine.