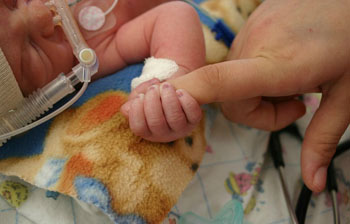 Image: Tests show low levels of blood marker DLK1 were a good predictor of poor fetal growth and complications of pregnancy, and could be used as a NIV prenatal diagnostic (Photo courtesy of Queen Mary University of London).
Researchers have found that the protein DLK1 in blood of pregnant women is required for maternal metabolic adaptations to pregnancy and is associated with fetal growth restriction, and suggested that DLK1 could be used as a prenatal diagnostic marker in a relatively non-invasive test to help determine health of newborns and aid decisions on early elective deliveries.

In an initial study, led by researchers at Queen Mary University of London (QMUL; London, UK), tests in pregnant mice and a small sample of women showed that an abnormally low level of DLK1 in maternal blood was a good predictor of poor fetal growth and complications of pregnancy, and could be used as a non-invasive prenatal diagnostic.

“At the moment, there are very few ways of predicting which pregnancies will go wrong, and which small babies are small because they are not getting enough nutrition while in the womb, and which are small simply because of their genes,” said lead researcher Dr Marika Charalambous from QMUL, “It’s incredibly important to start developing tests that can give an obstetrician much more information on the pregnancy before delivery, so that they can intervene before complications come to crisis point. Measuring DLK1 levels in the mother’s blood could be a reliable and non-invasive way of predicting whether there are likely to be complications; especially those that cause reduced nutrient supply to the baby. In those instances, you really need to get the baby out quickly, so women could opt to have an early elective delivery.”

DLK1 is present at high levels in maternal blood during pregnancy, in humans and rodents. But little has been known about its source, functional role, and whether it can indicate anything about fetus health. To determine the source of DLK1 in the blood of pregnant mothers, the researchers initially used mice experiments that involved DLK1 gene knockout in either the fetus or mother, and measuring DLK1 in maternal blood. They found that the protein originates from the embryo, suggesting that maternal blood DLK1 levels could provide a direct readout about the embryo’s biological state.

The team then looked at how DLK1 affects pregnant mouse metabolism. When fasting for 24 hours, mice and humans begin undergoing ketosis (burning fat stores as an alternative energy source). When DLK1 was inactivated in pregnant mice, their fasting response was impaired by being unable to begin ketosis. This indicated the importance of DLK1 in providing energy for the fetus and its growth, and maternal blood DLK1 levels were found to be a good predictor of offspring mass.

Finally, with help from the POPs study at University of Cambridge, the researchers studied 129 first-time mothers, measuring blood DLK1 levels and recording pregnancy outcomes. They found that low DLK1 levels were associated with reduced growth of the fetus resulting from pregnancy complications, including poor blood flow through the umbilical cord.

The researchers warn that further clinical studies in humans will be required to determine DLK1’s potential as a prenatal diagnostic.

The study, by Cleaton MAM et al, was published online October 24, 2016, in the journal Nature Genetics.