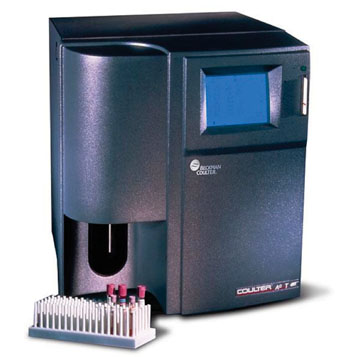 In maternal blood, fetal red blood cells (RBCs) can be identified due to the differences between them and adult RBCs and these are fetal hemoglobin (HbF) presence, lack of the carbonic anhydrase (CA), and the presence of particular group antigen.

Scientists at the Centre of Postgraduate Medical Education (Warsaw, Poland) collected blood samples on EDTA as follows: 20 RhD-negative blood donors samples to evaluate test specificity, 18 RhD-negative blood donors and 18 RhD-positive cord blood samples to prepare mixtures imitating FMH from 0.1% to 5%, and 14 weak D blood donors samples to evaluate test specificity with anti-D antibodies and to perform 20 suspensions with the RBCs of 10 RhD-positive blood donors. Blood samples from 98 women were tested: 74 from women just before labor and in 1 to 2 hours after it, 10 only before childbirth, including five before 40 weeks of pregnancy, due to fetal anemia, and 14 only after labor.

The amount and parameters of RBCs were measured with the COULTER AcT diff/diff2 Hematology Analyzer (Beckman Coulter, Brea, CA, USA) to prepare RBCs mixtures with the known percentage of fetal cells. The team used three flow cytometry methods including Antigen D staining, Hemoglobin F (HbF) staining and HbF and carbonic anhydrase (CA) staining. The flow cytometer was calibrated correctly and in all samples, 50,000 RBCs were analyzed using FACSCanto II and FACSDiva software (Becton, Dickinson and Company, Franklin Lakes, NJ, USA). The scientists also carried out Kleihauer–Betke test (KBT), which is based on HbF resistance to acid elution while HbA is removed from cells.

The hematologists found that in all artificial mixtures with known concentrations, FCTs and KBT with counting 10,000 RBCs had similar satisfying sensitivity and specificity. KBT with counting 2000 RBCs had to be disqualified because of significant discrepancies between expected and measured values of FMH. The test procedure with anti-D was easier and shorter than the remaining tests, but it can be only used for FMH assessment in RhD-negative mothers with RhD-positive newborns. In one clinical sample, it was impossible to distinguish fetal RBCs from maternal F cells in KBT and FC with anti-HbF but other tests were useful.

The authors concluded that the methods that use flow cytometry and anti-HbF, anti-D, and anti-HbF + anti-CA antibodies, as well as microscopic Kleihauer–Betke test detecting HbF-positive blood cells, with counting 10 000 of RBCs, have similar satisfying sensitivity and specificity. In the four tests, correlation between expected and obtained results was appropriate. Each test had some advantage and limitation in any clinical situation. Therefore, it is best to have opportunity to perform two or three assays in the laboratory. The study was published in the August 2016 issue of the International Journal of Laboratory Hematology.