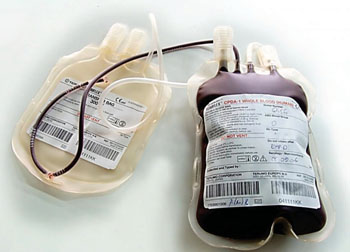 Image: A bag of donor’s blood before cross matching and transfusion (Photo courtesy of the Nursing Times).
The risks associated with unnecessary transfusion of blood products, including infections, transfusion reactions, and, in some clinical situations, alloimmunization, makes a judicious approach to transfusion is of the utmost importance.

However, despite several decades of experience with red blood cell (RBC) transfusion, the ability to predict transfusion requirements based on the expected rise in hemoglobin (Hgb) has been limited. As a result, decisions regarding RBC transfusion have been based on clinical experience and gestalt.

Medical scientists at the Eastern Virginia Medical School (Norfolk, VA, USA) determined the variability of response to red blood cell transfusion and to predict which patients will have an Hgb rise higher or lower than that predicted by the long-standing convention of “one and three”. The study was a retrospective chart review in a single hospital and data for 167 consecutive patient encounters were reviewed. The dataset was randomly divided into derivation and validation subsets with no significant differences in characteristics. Pre-transfusion Hgb was checked no earlier than 12 hours prior to transfusion, and post-transfusion Hgb checked between three and 24 hours after transfusion.

DeltaHgb was defined as post-transfusion Hgb minus pre-transfusion Hgb per red blood cell unit. They classified all the patients in both the subsets as “high responders” (DeltaHgb greater than 1 g/dL) or as “low responders” (DeltaHgb equal to or less than 1 g/dL). In univariate analysis, age, sex, body weight, estimated blood volume, and body surface area were significantly associated with response category. The mean DeltaHgb per RBC unit in the series was 1.23 g/dL. This lends support to the rule of thumb, which lacks large published datasets to support this rule. Then, multiple different prediction models were tested using a variety of variables.

The authors concluded that the best-performing model used body surface area (BSA) and correctly classified 69% of patients, with a sensitivity of 84.6% and a specificity of 43.8% when tested on an independent dataset without any overlap with the derivation dataset. The study was published on September 21, 2016, in the Journal of Blood Medicine.