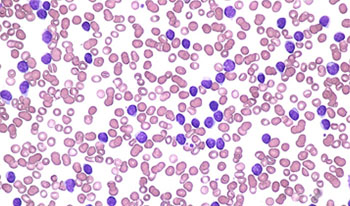 Image: A blood smear showing Chronic Lymphocytic Leukemia (Photo courtesy of Peter Maslak / ASH).
An inherited genetic variant, associated with an increased risk of developing the most common type of leukemia, helps cancer cells survive has been identified and these findings could lead to new ways to target the disease.

Genome wide association studies (GWAS) which analyze genetic information from both patients and healthy individuals to look for genetic associations with diseases have so far identified 31 areas of the genome where DNA variations are linked with an increased risk of developing chronic lymphocytic leukemia (CLL).

Scientists at The Institute of Cancer Research (London, UK) and their colleagues identified for the first time the role that a specific area of the genome plays in the formation of this leukemia. They found that a single letter DNA sequence variation, known as a single nucleotide polymorphism (SNP), at a specific site in the genome disrupts the activity of a protein called Transcription factor p65 or RELA. This protein is involved in a process of controlled cell death that is a key part of the body's natural defense against disease.

The team found that the particular risk SNP, rs539846-A, interferes with the activity switch of a gene, called 'BCL-2 modifying factor' (BMF), that normally works to produce 'pro-death' signals. This makes it harder for RELA to flip on the activity of the gene and reduces the levels of the signal. This loss of 'pro-death' signal tips the balance towards 'pro-survival', so that the CLL cells can sidestep self-destruction. These findings complement work from recent clinical trials that showed drugs that mimic 'pro-death' proteins by targeting the 'pro-survival' BCL-2 pathway can produce a strong anti-cancer effect in CLL patients who had relapsed after initial treatment. The latest discovery could provide important insight into how these and similar drugs work so that their combined use can be optimized.

Richard S. Houlston, MD, PhD, a Professor of Molecular and Population Genetics, and lead investigator said, “Although many significant risk variants for this type of leukemia have been identified, the biological mechanisms through which these variants affect leukemia development have been less well studied. This study highlights the importance of cell death-inducing proteins such as BMF in controlling CLL development and could help in the design of new drugs to treat this disease.” The study was published on August 11, 2016, in the journal Cell Reports.

The Institute of Cancer Research