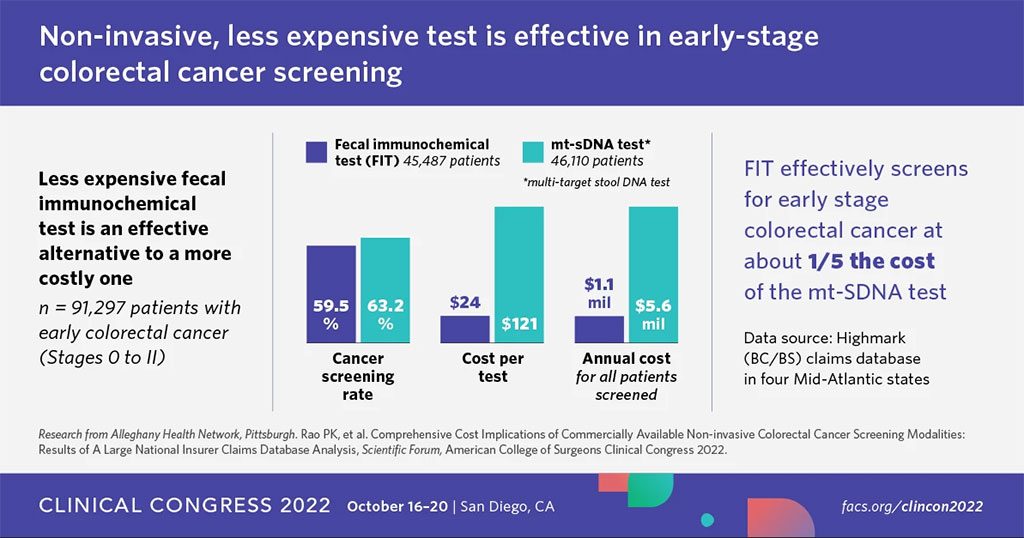 Image: FIT has been found to detect early-stage cancer at one-fifth the cost (Photo courtesy of Allegheny Health)

Guidelines issued by the U.S. Preventive Services Task Force (USPSTF) suggest a fecal immunochemical test (FIT) can be used as the primary noninvasive screening modality for early-stage colorectal cancer, although a significant proportion of patients still receive a more expensive alternative test called Cologuard. Commercially available noninvasive screening tests for colorectal cancer - a FIT and the multi-target stool DNA test (mt-sDNA; or Cologuard) - are equally effective for screening patients with early-stage colorectal cancer. Data used for national screening guidelines has shown no difference between the two tests at detecting adenoma versus colorectal malignancy. However, a new study has revealed that a FIT costs about one-fifth of the multi-target DNA test. These results align with previous studies out of Japan and the Netherlands examining FIT as an appropriate screening modality that is more cost effective than other types of noninvasive colorectal screening tests.

In the study, researchers at Allegheny Health Network (Pittsburgh, PA, USA) looked at 117,519 people in the Highmark claims database who underwent colorectal screening in 2019. Highmark is a Blue Cross Blue Shield Association insurer in four Mid-Atlantic states. From that group, the researchers identified 91,297 people who had noninvasive screening with either the fecal immunochemical test (FIT, n=45,487) or the DNA test (mt-sDNA, n=46,110) instead of having a routine colonoscopy. The findings revealed that among the study population that underwent colorectal screening, 45,487 (38.7%) had one of two commercially available FIT tests and 46,110 (39.2%) had the mt-sDNA test. Patients who were screened with either test presented with early disease, staged from 0 to II, at similar rates: 59.5% for FIT and 63.2% for mt-sDNA test (p=0.77).

Patients within the Allegheny Health Network Oncology Registry diagnosed with colorectal cancer were matched to their claims data to determine distribution of cancer stage. If the noninvasive test indicated signs of early disease, patients were then referred for additional testing to confirm the findings. The total annual costs for the tests were USD 6.47 million - USD 1.1 million for a FIT, or about USD 24 per test, and USD 5.6 million for mt-sDNA, or about USD 121 per test. Costs were calculated using Medicare reimbursement rates. The researchers determined that transitioning all noninvasive colorectal cancer screening to FIT would result in a USD 3.9 million savings annually in the study population. What makes this study unique is the methodology used to analyze the claims data. The researchers analyzed outcomes in the local health registry and then applied those outcomes to the claims database. The cost of a screening colonoscopy in the database the researchers used was USD 635.

"Despite national guidelines suggesting that FIT be used as the primary noninvasive screening modality, we found that on review of our insurer's claims data, a significant proportion of patients still receive a more expensive alternative test. There is substantial cost savings not only to our patients but to our health system with promoting appropriate use of noninvasive testing," said Pavan K. Rao, MD, a general surgery resident at Allegheny Health Network. "There was no difference in the clinical stage at the time of diagnosis between the two tests, which again demonstrates the clinical equipoise maintained by switching to FIT."

"It's not just the cost of the mt-sDNA test kit or the cost of the FIT kit multiplied by the number of members in the healthcare system," said study coauthor Casey J. Allen, MD, a surgical oncologist at Allegheny Health Network. "It's the full downstream costs depending on the rates of false-positive and false-negative tests and how much it costs to obtain a colonoscopy when that occurs."