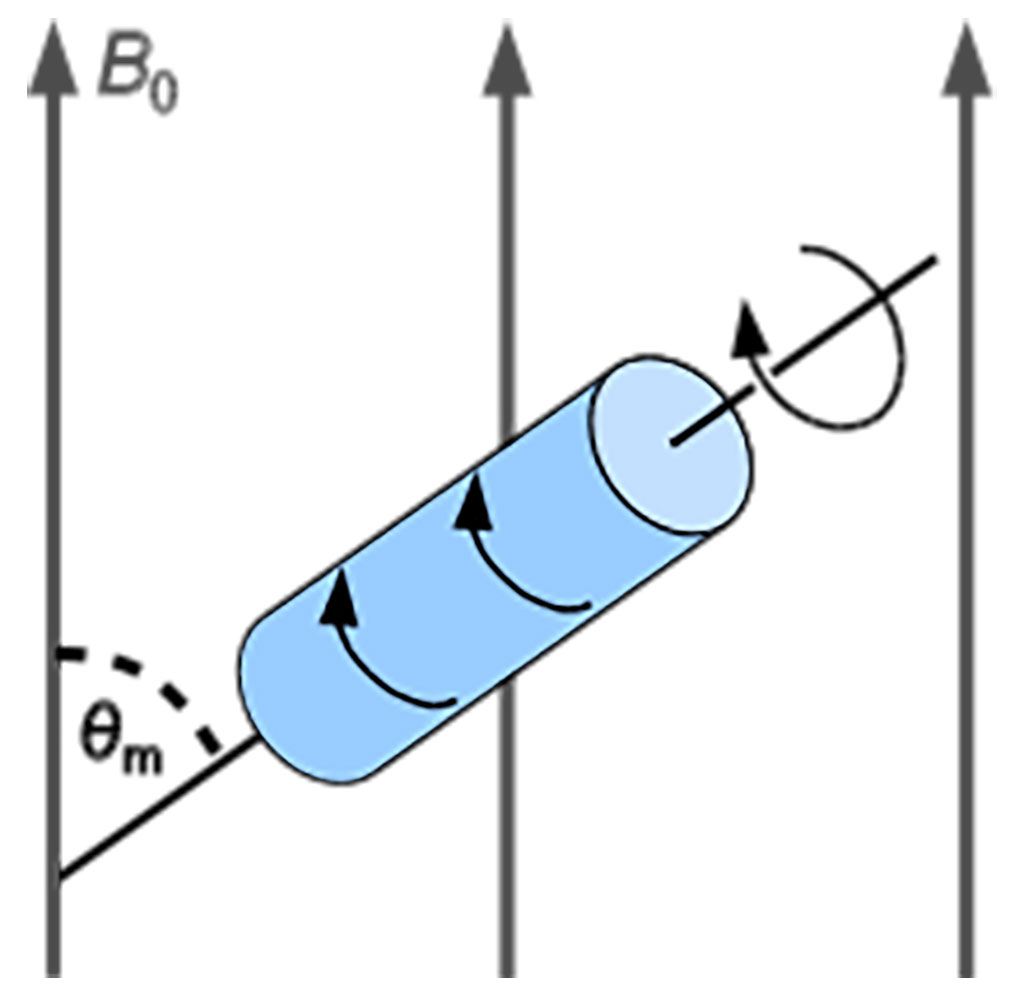 Image: Magic-Angle-Spinning (MAS) nuclear magnetic resonance (NMR) was used to establish the lung cancer predictive model. The sample (blue) is rotating with high frequency inside the main magnetic field (B0). It is tilted by the magic angle θm with respect to the direction of the magnetic field orientation (Photo courtesy of Wikimedia Commons)
A predictive model based on alterations in blood metabolites measured by high-resolution magnetic resonance spectroscopy can detect early-stage lung cancer.

Early-stage lung cancer is mostly asymptomatic, so the disease is usually only diagnosed at a late stage when the survival rate is extremely low. To facilitate earlier detection of lung cancer, investigators at Harvard Medical School’s Massachusetts General Hospital (Boston, USA) created a lung cancer predictive model based on metabolomics profiles in blood samples. Metabolomics is the systematic study of the unique small-molecule chemical fingerprints that specific cellular processes leave behind.

The investigators analyzed 10 microliter serum samples obtained from 79 patients before (within five years) and at the time of lung cancer diagnosis. Disease predictive models were established by comparing serum metabolomic patterns between training cohorts: patients with lung cancer at time of diagnosis, and matched healthy controls. These predictive models were then applied to evaluate serum samples of validation and testing cohorts, all collected from patients before their lung cancer diagnosis.

Results revealed that the predictive model could detect changes in blood metabolomic profiles that were intermediate between healthy and disease states. The model was applied to a different group of 54 patients with non-small-cell lung carcinoma (NSCLC) to analyze blood samples obtained before and after their cancer diagnosis. Results confirmed that the model’s predictions were accurate. Furthermore, values from the metabolomics predictive model measured from prior-to-diagnosis sera could be used to predict five-year survival for patients with localized disease.

“Our study demonstrates the potential for developing a sensitive screening tool for the early detection of lung cancer,” said senior author Dr. Leo L. Cheng. associate professor of radiology at Harvard Medical School. “The predictive model we constructed can identify which people may be harboring lung cancer. Individuals with suspicious findings would then be referred for further evaluation by imaging tests, such as low-dose CT, for a definitive diagnosis.”

The predictive model for early diagnosis of lung cancer was described in the December 13, 2021, online edition of the journal Proceedings of the National Academy of Sciences of the United States of America.