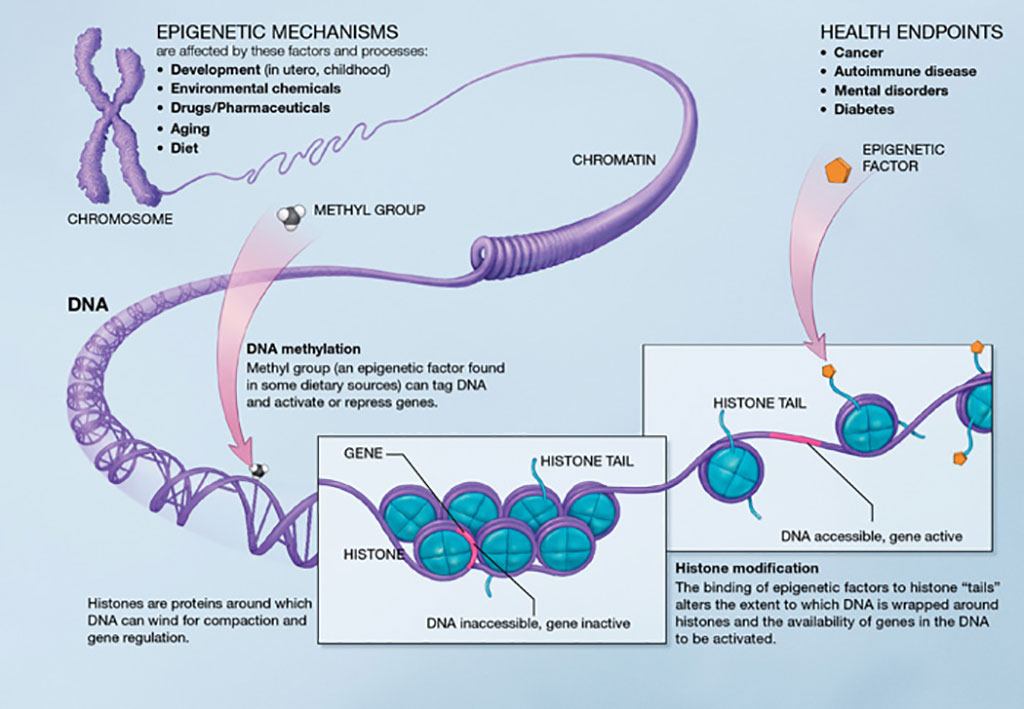 Image: How epigenetic mechanisms can affect health (Photo courtesy of [U.S.] National Institutes of Health)
DNA methylation alterations, termed epimutations, have demonstrated the potential to be used as a biomarkers for rheumatoid arthritis to improve the detection and clinical management of the disease.

Rheumatoid arthritis (RA) is a long-term autoimmune disorder that primarily affects joints. Most commonly, the wrist and hands are involved, with the same joints typically involved on both sides of the body. The disease may also affect other parts of the body, including skin, eyes, lungs, heart, nerves, and blood. Often, symptoms emerge gradually over a period of weeks or months. RA affects between 0.5 and 1% of adults in the developed world with between five and 50 per 100,000 individuals newly developing the condition each year. Onset is most frequent during middle age, and women are affected 2.5 times as frequently as men. Current drug treatments have limited efficacy in many RA patients, although some studies have shown that treatments begun in early stages of the disease can cause remission of symptoms.

Mutations have been assumed to be the primary factor in the development of RA, but they account for only a minority of the variance in disease risk. In contrast to genetic influences, the environment can have dramatic impacts on the epigenetics that associate with origin of the disease.

Epigenetic mechanisms are affected by several factors and processes including development in utero and in childhood, environmental chemicals, drugs and pharmaceuticals, aging, and diet. DNA methylation occurs when methyl groups tag DNA, which can activate or repress genes. Histones are proteins around which DNA can wind for compaction and gene regulation. All of these factors and processes can have an effect on people's health and potential for disease development.

To examine the role of epigenetic factors in the development of RA and to assess their value in diagnosing the disease, investigators at Washington State University (Pullman, USA) used buccal cells and purified blood monocytes from two different clinical cohorts involving Caucasian or African American female populations with or without arthritis. The differential DNA methylation regions (DMRs) between the control and RA populations were identified with an epigenome-wide association study.

Results revealed distinctive DMRs (epimutations) common to both the buccal cells and monocytes. The DMR associated genes were identified and many had previously been shown to be associated with arthritis. Therefore, DNA methylation epimutation RA biomarkers were cell type specific and similar findings were observed with the two racial background populations.

The current study confirmed the existence of buccal cell RA epigenetic biomarkers and hinted that a relatively non-invasive diagnostic cheek swab test could be developed to screen for the disease.

“Surprisingly, most of the DNA methylation sites we found that were consistent among patients with the disease were associated with genes previously known to be involved in rheumatoid arthritis,” said senior author Dr. Michael Skinner, professor of biological sciences at Washington State University. “If we can identify these patients ten years earlier before the disease develops, it opens up a whole arena of preventative medicine that we did not have access to before.”

The study was published in the December 10, 2021, online edition of the journal Scientific Reports.