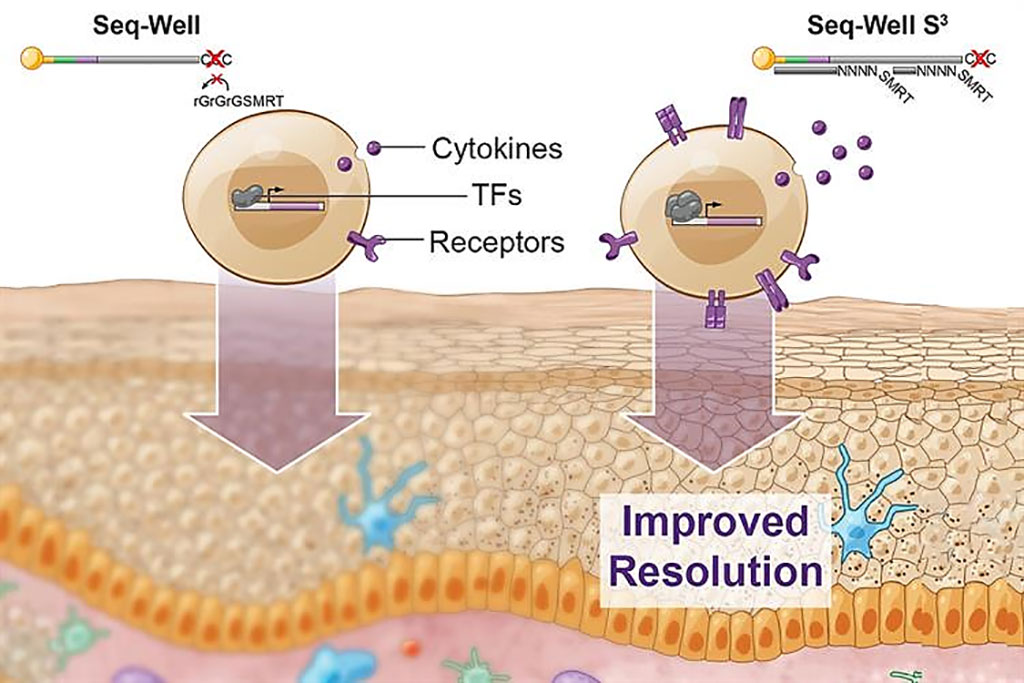 Image: Scientists have greatly boosted the amount of information that can be obtained using Seq-Well S3, a technique for rapidly sequencing RNA from single cells (Photo courtesy of MIT).
Single-cell RNA sequencing (scRNA-seq) is a powerful tool to characterize cells. Current scRNA-seq platforms, despite offering high throughput, are inefficient and provide low resolution among distinct cell states and molecular features.

Most high-throughput scRNA-seq methods rely on barcoding of cellular components to recover single-cell transcriptomes for thousands of cells at once. This is achieved by isolating uniquely barcoded poly-dT oligonucleotides that can capture and tag cellular messenger RNA (mRNA) during reverse transcription. In a second step, an additional oligonucleotide priming site is added to newly synthesized complementary DNA (cDNA) to enable polymerase chain reaction (PCR)-based amplification.

Medical Biochemists at the Massachusetts Institute of Technology (Cambridge, MA, USA) and their associates developed Seq-Well S3 ("Second-Strand Synthesis") as a massively parallel scRNA-seq protocol that uses a randomly primed second-strand synthesis to recover cDNA molecules to facilitate template-switching. This generates double-stranded cDNA that is labeled on one end with the SMART sequence and its reverse complement on the other, making it more accessible for PCR enzymes to amplify the molecules.

The team also distinguished patterns associated with multiple diseases by looking across different inflammatory skin conditions, revealing common and unique features. For instance, they found that a group of natural killer cells, γΔ T cells, and a sub-cluster of immature cytotoxic T cells are derived from leprosy and granuloma annulare, indicating common T-cell programming in both forms of inflammation.

Alex Shalek, PhD, associate professor of chemistry at MIT and a senior author of the study, said, “"It's become clear that these technologies have transformative potential for understanding complex biological systems. If we look across a range of different datasets, we can really understand the landscape of health and disease, and that can give us information as to what therapeutic strategies we might employ.” The study was published on October 13, 2020 in the journal Immunity.