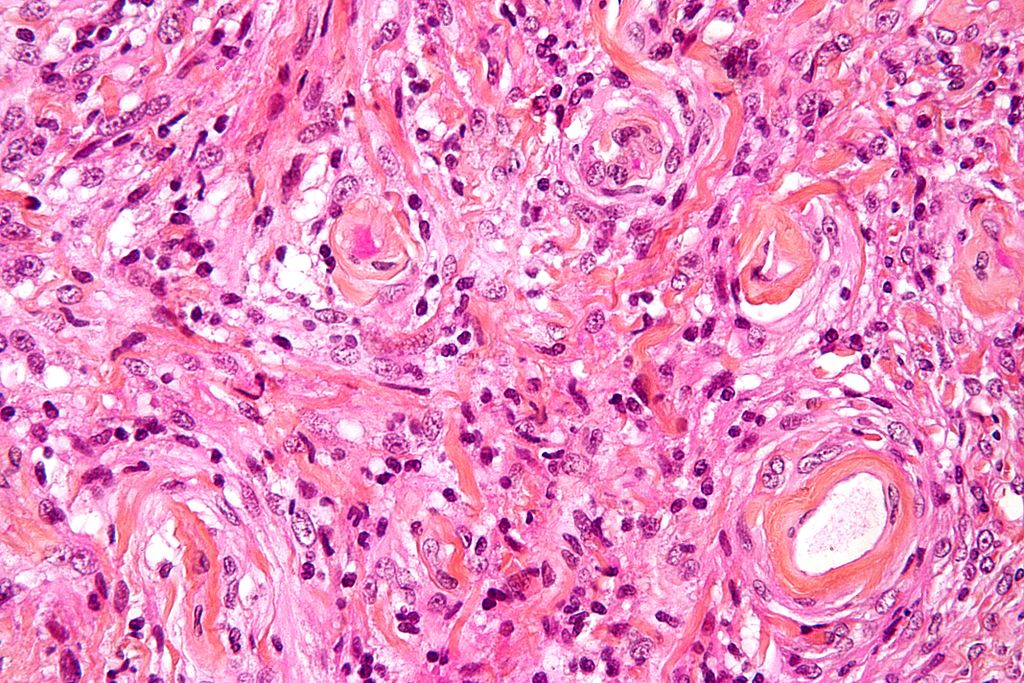 Image: High magnification micrograph of a meningioma showing the characteristic whirling (Photo courtesy of Wikimedia Commons)
Identification of a novel biomarker will allow clinicians to differentiate between truly benign meningiomas and those that will eventually progress, grow rapidly, and spread.

Meningiomas, which arise from the membranes that surround the brain and spinal cord, are the most common tumor to arise from central nervous system. Meningiomas are graded based on their microscopic appearance, rate of growth, and tendency to spread to other tissues. Most WHO Grade 1 meningiomas carry a favorable prognosis. However, some become clinically aggressive with recurrence, invasion, and resistance to conventional therapies (grade 1.5; recurrent/progressive WHO grade 1 tumors requiring further treatment within 10 years).

Since no recognized genetic alterations are known to distinguish grade 1.5 from grade 1 tumors, investigators at the University of Washington School of Medicine (Seattle, USA) examined the possibility that protein modifications were more likely in the grade 1.5 tumors.

To this end, they used MS (mass spectroscopy)-based phosphoproteomics and peptide chip array kinomics to compare grade 1 and 1.5 tumors.

Phosphoproteomics is a branch of proteomics that identifies, catalogs, and characterizes proteins containing a phosphate group as a posttranslational modification. Phosphorylation is a key reversible modification that regulates protein function, subcellular localization, complex formation, degradation of proteins, and therefore cell signaling networks. It is estimated that between 30%–65% of all proteins may be phosphorylated, some multiple times, which provides clues to which protein or pathway might be activated. since a change in phosphorylation status almost always reflects a change in protein activity.

Kinomics is the study of the kinome, a global description of kinases and kinase signaling. Since kinases drive numerous signaling pathways in biology (both normal and disease), determining the pertinent kinases in a biological system is of high importance.

Results of the MS-based phosphoproteomics revealed differential Serine/Threonine phosphorylation in 32 phosphopeptides. The kinomic profiling by peptide chip array identified 10 phosphopeptides, including a 360% increase in phosphorylation of retinoblastoma 1 (RB1) protein, in the 1.5 group. Rb1 hyperphosphorylation at the S780 site distinguished grade 1.5 meningiomas in an independent cohort of 140 samples and was associated with decreased progression/recurrence-free survival.

“We have designated them grade 1.5 because they fall somewhere between grade 1 and grade 2 but until now we have had no way of telling which grade 1 tumors were, in fact, grade 1.5,” said senior author Dr. Manuel Ferreira, associate professor of neurological surgery at the University of Washington School of Medicine. “They look the same under the microscope and there are no clear genetic or other markers that identify them. We do not know what is causing Rb1 to be phosphorylated, and we do not know what effect the phosphorylation is having. But now we can stain tissue from a patient who has what appears to be a grade 1 meningioma and identify those whose tumors may be grade 1.5, requiring closer follow up and perhaps additional treatment. We hope this modified protein will not only serve as a biomarker to identify these tumors but also help us gain insights into the pathways that drive their behavior.”

The meningioma study was published in the October 15, 2019, online edition of the journal Clinical Cancer Research.