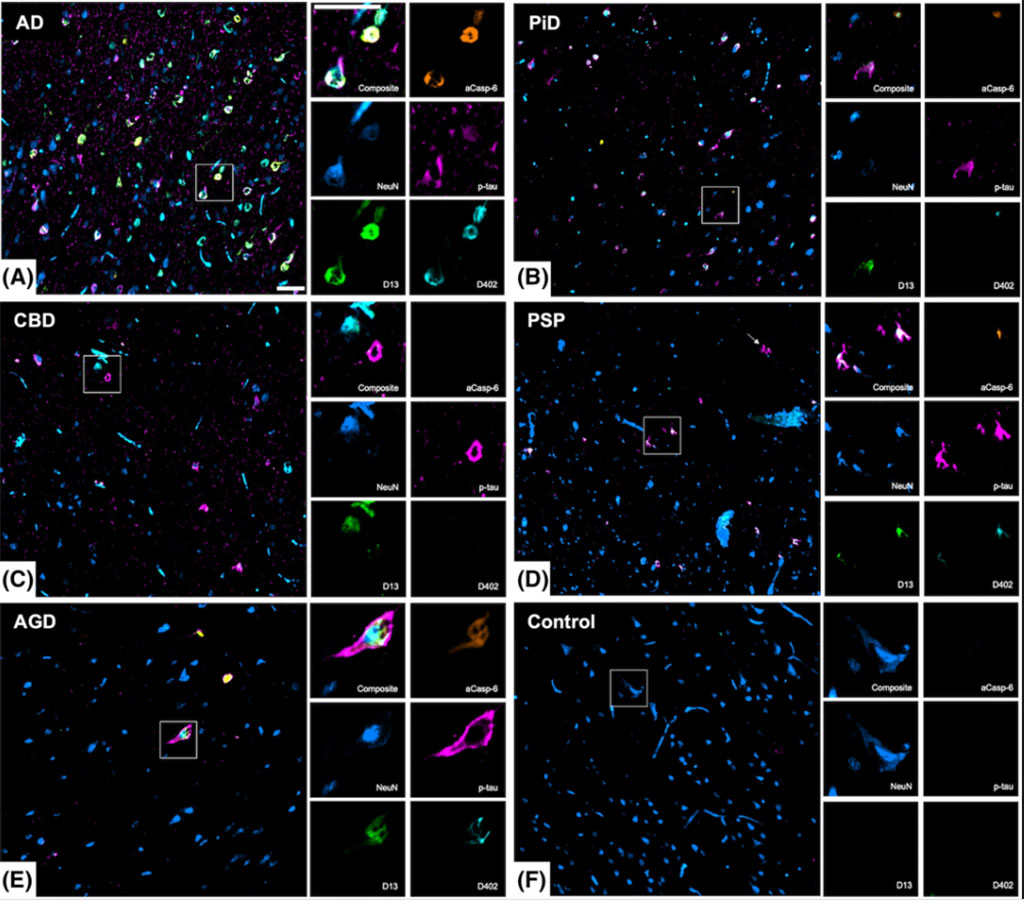 Alzheimer’s disease (AD) is characterized by the formation of aggregates of the tau protein in brain cells called neurofibrillary tangles. Although deposits of the amyloid β-protein are also found in AD brains, some scientists think that the tau protein aggregates are primarily responsible for the development of AD.

Proteolytic truncation of tau (tr-tau) by active caspases has recently been recognized as a significant contributor to tau-driven nosology in AD and primary tauopathies. Caspases (Casps), cysteine-aspartic proteases, are proteolytic enzymes with well-defined roles in apoptosis and inflammation that cleave their substrates after specific aspartic acid (D) residues.

A team of Neuroscientists at the University of California San Francisco (San Francisco, CA, USA) and their colleagues used post-mortem brain samples from individuals with AD, Pick’s disease (PiD) which is a 3R tauopathy and 4R tauopathies: corticobasal degeneration (CBD), progressive supranuclear palsy (PSP) and argyrophilic grain disease (AGD). They generated two neoepitope monoclonal antibodies against tr-tau sites (D402 and D13) targeted by active Casp-6 (aCasp-6). Then, they used five-plex immunofluorescence to quantify the neuronal and astroglial burden of aCasp-6, tr-tau, p-tau and their co-occurrence in healthy controls, AD and primary tauopathies.

Lea T. Grinberg, MD, PhD, a Professor of Neurology and co-senior author of the study, said, “Our results suggest that when we measure phosphorylated tau as a proxy of tau pathology in AD, we are missing almost half of the story. Any in vivo measure using phosphorylated tau only to monitor AD (progression and clinical trial results) is missing a lot. Furthermore, we are not detecting well which class of neurons are the most vulnerable, so we cannot create the right strategies to protect them. Importantly, caspase-6 inhibitors are available and experimental work shows that inhibiting caspase-6 activation decreases tau pathology. Thus, caspase-6 inhibitors could be an effective therapy for AD.”

The authors concluded that early modulation of active Casp-6 to reduce tr-tau pathology is a promising therapeutic strategy for AD and PiD, but is unlikely to benefit 4R tauopathies. The large percentage of tr-tau-positive neurons lacking p-tau suggests that many vulnerable neurons to tau pathology go undetected when using conventional p-tau antibodies. The study was published on May 4, 2022 in the journal Neuropathology and Applied Neurobiology.