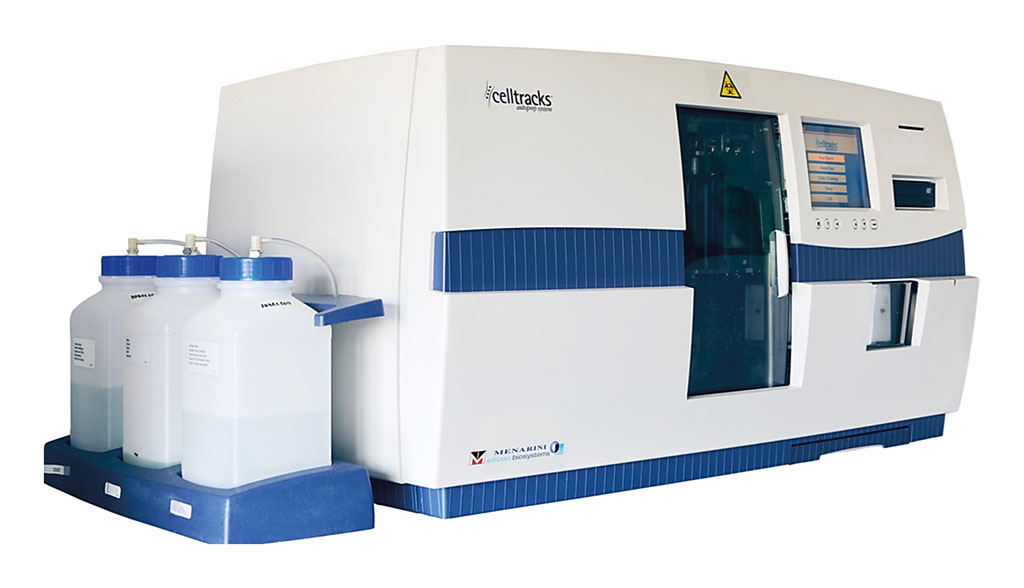 Image: The CELLSEARCH CTC System is the first and only clinically validated, FDA-cleared system for identification, isolation, and enumeration of circulating tumor cells (CTCs) from a simple blood test (Photo courtesy of Menarini Silicon Biosystems).
The choice between chemotherapy and endocrine therapy as first-line treatment for hormone receptor–positive, ERBB2 (also known as HER2)-negative metastatic breast cancer is usually based on the presence of clinical features associated with a poor prognosis.

Circulating Tumor Cell (CTC) test is a simple blood test that helps oncologists in assessing the prognosis of patients with metastatic breast, colorectal, or prostate cancer. A prespecified circulating tumor cell count (CTC) threshold appeared to be reliable for selecting treatment with chemotherapy instead of hormone therapy in women with a certain metastatic breast cancer phenotype, a non-inferiority trial indicated.

A team of Medical Oncologists led by those at the Paris-Saclay University (Saint-Cloud, France) studied 755 women with hormone receptor-positive, ERBB2-negative metastatic breast cancer who were randomly assigned to receive first-line treatment based on CTC count or treatment based on clinician choice. In the CTC-count arm, women with CTC count of 5 CTCs/7.5 mL or greater were automatically assigned to chemotherapy instead of endocrine therapy. Data were collected at 17 French cancer centers from February 1, 2012, to July 28, 2016, and analyzed June 2019 to October 2019. The CELLSEARCH CTC System (Menarini Silicon Biosystems, Bologna, Italy) was used to capture and isolate tumor cells circulating in the blood in all patients.

In addition, more than one-third of patients had discordant CTC and clinical assessments. When these patients with clinical low risk and high CTC counts were pooled with clinical high risk/low CTC counts in a multivariable analysis, PFS and overall survival were higher for those treated with chemotherapy versus endocrine therapy. Overall survival in the per-protocol population was 47.3 months (95% CI 43.8-51.3) in the CTC arm and 42.8 months (95% CI 39.5-47.4) in the standard arm.

Francois-Clement Bidard, MD, PhD, Professor of Medical Oncology and senior author of the study, said, “The use of the CTC count represents the first objective and reproducible decision tool to help physicians choose between hormone therapy or chemotherapy for this particular group of patients.”

The authors concluded that this randomized clinical trial found that the CTC count may be a reliable biomarker method for guiding the choice between chemotherapy and endocrine therapy as the first-line treatment in hormone receptor–positive, ERBB2-negative metastatic breast cancer. The study was published on November 5, 2020 in the journal JAMA Oncology.